ComiXology and Skybound partner up to give out 2,500 free digital copies of The Walking Dead Vol. 1

Following the wildly popular promotional giveaways at WonderCon Â‘12 and Emerald City Comicon Â‘12 last month, comiXology is teaming up once again with The Walking Dead creator Robert KirkmanÂ’s Skybound, to make C2E2 Â’12 unforgettable for comic fans by giving them a free Â“tasteÂ” of the first graphic novel Â— regularly $8.99 for 140 pages Â— that the hitThe Walking Dead TV show is based on.

The first 2,500 C2E2 Â‘12 attendees to come by comiXologyÂ’s booth (#522) will receive a limited edition promotional postcard imprinted with a unique download code redeemable for The Walking Dead Vol. 1 exclusively on comiXology.com in exchange for an email sign up.

In addition to the must-have The Walking Dead Vol. 1 giveaway, comiXology will be providing hands on demonstrations of the Comics by comiXology digital comics platform at their booth all weekend long. Comic fans should not miss their chance to get a look at the all new 3.1 iOS upgrade that includes the CMX-HD digital comics format for the new iPad.

About comiXology
Founded in 2007 with the mission of bringing comics to people everywhere, comiXology Â— in just five short years Â— has revolutionized the comic book and graphic novel world. From creating the industry leading platform for digital comics to tools and services for brick and mortar retailers, comiXology has lead the charge in exposing new audiences to the rich history and culture of comic books. With the development of the Comics by comiXology digital comics platform Â— available across iPhone, iPad, Android, Kindle Fire and the WebÂ— comiXology provides the easiest way worldwide for people to enjoy comics at just the click of a button! Regularly ranking as the top grossing iPad app in the entire iTunes App Store, Comics by comiXology was recently selected as a preloaded app on AmazonÂ’s Kindle Fire. Providing digital comics across multiple platforms, comiXology will not stop until everyone on the face of the earth has been turned into a comic book fan.

About The Walking Dead: Â“The Walking DeadÂ” is a monthly black-and-white comic book series created by Robert Kirkman that follows a group of survivors through a world overrun by The Walking Dead as they struggle to survive an even deadlier threat: Living humans so terrified about their own survival that they are willing to sacrifice everything else. Winner of the 2010 Eisner Award for Best Continuing Series, the Skybound comic has been translated into more than 30 languages, and is available in over 50 countries worldwide. IGN called it Â“one of the best monthly comics availableÂ” and Complex hails it as Â“one of the best comic series of all time.Â” ItÂ’s also become the highest-rated drama on basic cable of all time. The AMC television series, with Kirkman serving as a writer and executive producer, had 11 million viewers for the season two premiere and was instantly renewed for a third season. As the first TV drama to be launched around the world simultaneously, itÂ’s in 120 countries, translated into 33 languages and is in 250 million households. The Walking Dead also dominated the New York TimesÂ’ bestseller lists for graphic novels and was the top seller for 2011. www.Skybound.com is your destination for all news and merchandise for Robert Kirkman, The Walking Dead and all Skybound titles.

VALIANT Is Taking C2E2 By Storm!

This April 13th-15th, Valiant Entertainment is making its debut con appearance at Chicago’s premier pop culture event, C2E2, and we’re bringing a boatload of sneak previews, exclusive prizes and special guests along to celebrate! Don’t miss out – this is comicdom’s one and only chance to get an advance look at the Summer of Valiant before X-O Manowar #1 hits stores everywhere on May 2nd. Stop by the Valiant booth (#411) all weekend long to check out one-of-a-kind giveaways and programming that can’t be found anywhere else!
â€¢ VALIANT COMICS SUMMER PREVIEW #1
The first official Valiant Comics release – anywhere! Check out this C2E2-only preview edition for a look ahead at the Summer of Valiant’s biggest releases, including X-O Manowar #1 and Harbinger #1! This is a one-of-a-kind collectible – and it’s completely FREE for con-goers while supplies last!
â€¢ SIGNINGS WITH X-O MANOWAR’S ROBERT VENDITTI
War is coming to C2E2! New York Times best-selling author and X-O Manowar writer Robert Venditti will be on hand daily at the Valiant booth signing Valiant swag and X-O Manowar “War is Coming” posters on Friday from 3-5 PM, Saturday from 11 AM-1 PM, and Sunday from 11 AM-1 PM. Stop by to say hello to the mind behind the Valiant Universe’s greatest hero!
â€¢ PORTFOLIO REVIEWS WITH EDITOR WARREN SIMONS
Calling all comics artists! Drop your sample portfolios at the Valiant booth on Friday or Saturday for chance at a one-on-one portfolio review with Executive Editor Warren Simons. Portfolios will be left with Valiant staff overnight and appointment times with selected artists will be posted the following the day.
And, whatever you do, don’t miss Valiant’s first-ever panel – VALIANT COMICS: INSIDE THE NEW NUMBER #1s! Join on us Saturday, April 14th at 4:15 PM to get the inside track on the Valiant’s four new series for summer 2012 – X-O Manowar, Harbinger, Bloodshot, and Archer & Armstrong! Featuring never-before-seen art, surprise announcements and appearances by X-O Manowar writer Robert Venditti, Executive Editor Warren Simons, Publisher Fred Pierce, and Chief Creative Officer Dinesh Shamdasani, this is the only place to find out what’s coming up next for the Valiant Universe!
The Summer of Valiant starts this Friday at C2E2! Keep up with us on Twitter at Twitter.com/ValiantComics for live con floor contests and announcements as they happen!
We’ll see you at the show!
Read More about VALIANT Announces First Con Appearance With C2E2, Exclusives and more

With the big news coming out of the recent C2E2 that Mark Waid, Marcos Martin, and Paolo Rivera will be debuting a new Daredevil this July, Ryan thought it a good idea to spotlight The Man Without Fear. 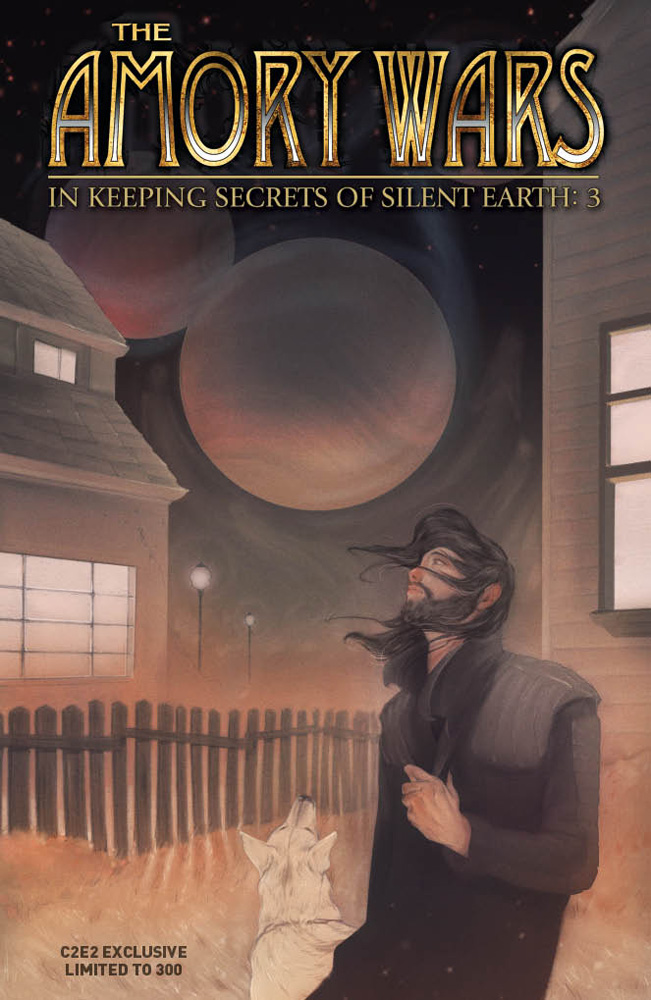 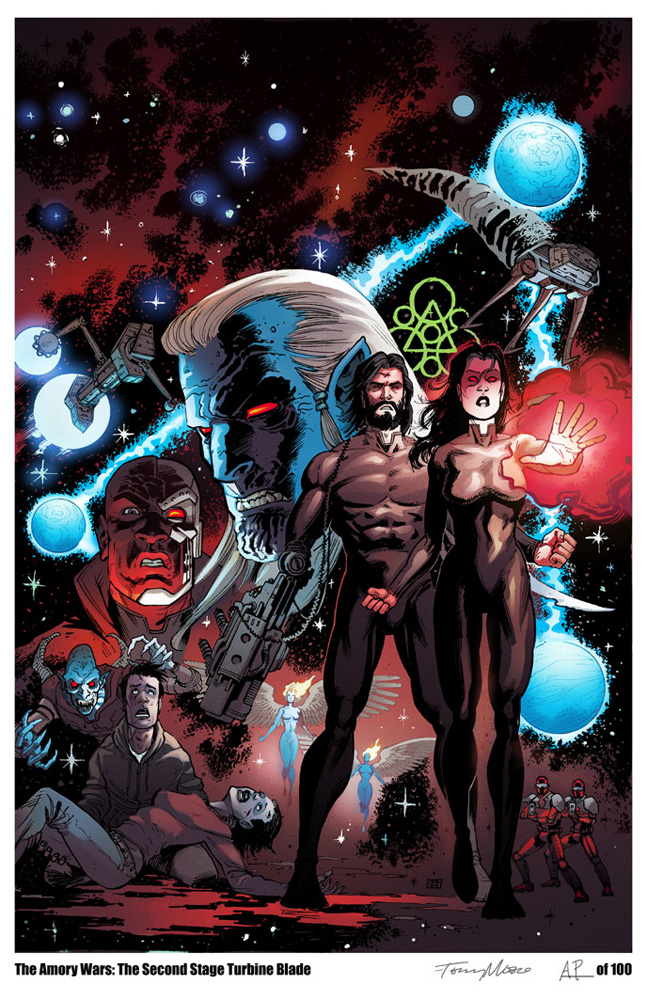 Also be sure to pick up THE AMORY WARS: IN KEEPING SECRETS OF SILENT EARTH: 3 #9 C2E2 Exclusive Variant (limited to 300 copies) and THE AMORY WARS: THE SECOND STAGE TURBINE BLADE limited edition print by THE WALKING DEAD artist Tony Moore!