Home > Movie News > Tom Holland Said To Be In Venom 2

Tom Holland Said To Be In Venom 2

Is Spider-Man Tom Holland in Venom 2?

According to a Google search on "Tom Holland" spotted by Redditors, the actor's upcoming films include Venom 2 and Uncharted.

It is already confirmed that Holland will be starring in Uncharted for Sony, which is presently on hold because of the coronavirus, but the 23-year-old actor hasn't been officially confirmed for Venom 2, though there is a lot of rumor and speculation (see below).

Before we all get our hopes up, recall that Hugh Jackman was said to be in The Avengers: Endgame as Wolverine in a similar fashion, as a Google search also showed Jackman in Endgame, and obviously we know that didn't happen.

It's possible Google may have included that in its search results simply because of its algorithm where a lot of people may be searching to see if Tom Holland is indeed in Venom 2.

According to Google, Tom Holland is in Venom 2: 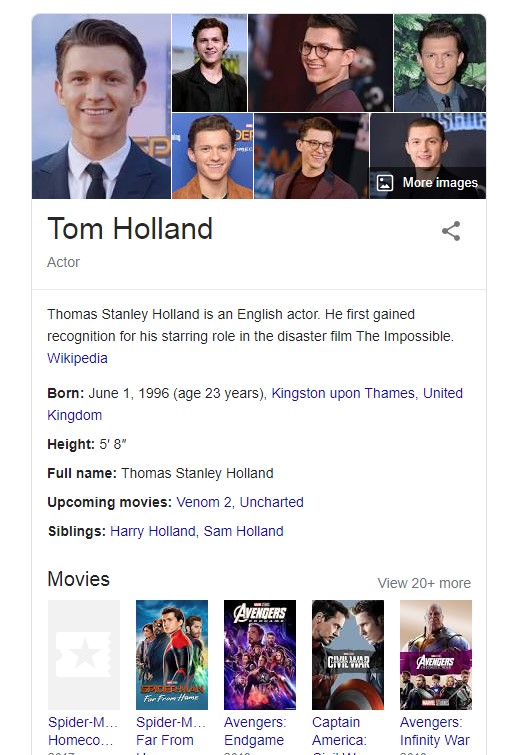 Regarding the rumors and speculation, it has been reported by the Hollywood trades that Sony wants to connect its Spider-Man spinoff universe to the MCU and even the Avengers, which would include Tom Holland as Spider-Man.

Rumors offer that things are leading to a crossover movie involving Tom Holland as Spider-Man, Tom Hardy as Venom, and Woody Harrelson as Carnage in a big "Maximum Carnage" flick.

The Hollywood trades also put it forth a Maximum Carnage movie is incoming, though they stopped short of stating it would involve Tom Holland as Spider-Man.

We can also add that the upcoming Jared Leto Morbius movie features Easter Eggs and references to Spider-Man, as the graffiti art features a Spider-Man costume with a nod to the events from Far From Home where Peter was set up as the killer of Mysterio. The film also includes Easter Eggs for Venom, possibly the Clone Saga, the Daily Bugle and it's thought J.K. Simmons might be featured as J.Jonah Jameson.

Another possibility thrown out there is that if the Tom Holland Spider-Man does make his way into the Sony spinoff movies, there won't be a reference to the MCU, perhaps similar to how the MCU never referenced Daredevil, the Netflix shows or SHIELD. With Doctor Strange 2 introducing the multiverse, it could also be possible that the Sony movies exist within their own universe as part of the MCU multiverse with its own version of the Tom Holland Spider-Man, meaning the MCU Spidey isn't the Sony Spidey, but Tom Holland plays both the characters.

Sony does own the film rights to Spider-Man, so we'll have to see how things play out.