Shazam! is now in theaters directed by David F. Sandberg starring Zachary Levi as the titular superhero along with Asher Angel as Billy Batson, Jack Dylan Grazer as Freddy Freeman and Mark Strong as the villain, Dr. Thaddeus Sivana. The flick is currently the number one movie at the box office as it brought in around $56 million, which is better than expected and estimated. So far so good.

My own thoughts on Shazam! is that overall I found it to be just an okay movie. It didn’t blow me away, but at the same time, I didn’t hate it. Following Wonder Woman and Aquaman, I did expect Shazam! to be better, and I probably place it toward the bottom of my DCEU list, maybe the second last in front of Suicide Squad or just above Justice League. My main two problems with the flick are the script and also that it wasn’t epic enough for me. Let’s dive in.

Regarding the script, we know that originally Shazam! was supposed to feature Dwayne Johnson as Black Adam. Johnson confirmed this a couple of days ago with word that the Black Adam movie will film next year. Basically what they did with the script is to remove the Black Adam parts and sort of combine them with Mark Strong’s villain, Sivana, which honestly I didn’t have a problem with. I understood why they removed Black Adam, which is because if Shazam! failed when it featured Black Adam, then you have two characters that fail. This way, without using Black Adam, if Shazam! failed, then at least you could still make and try and potentially fix things in a Black Adam movie. At least the good news is that Shazam! comes out a winner, so Black Adam should come off pretty good as well with Dwayne Johnson in the starring role. 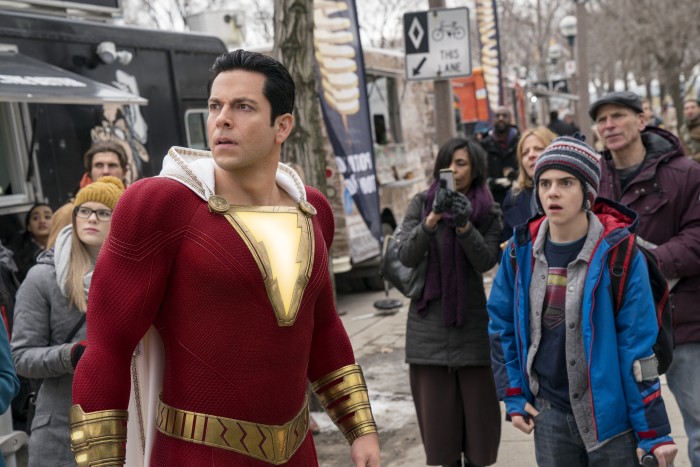 A big problem I found with the script was the handling of Billy’s parents. Just lazy writing. The movie first explains things in that the young Billy gets lost from his mother at the carnival. I initially was suspect but figured they would approach it again later in the movie, which they did, and it was awful. Doesn’t anybody associated with this movie have any kids? While they do explain the reason for Billy going into foster care is that his mother didn’t want him, they showed a flashback scene with the mom (where she looked nowhere around 17) watching Billy with the cops, and then she leaves. Huh? Child abandonment, anyone? Or how about endangering the welfare of a minor? It would have gone a long way having some sort of small scene where the mom tells the cops or foster care that she doesn’t want her kid. They made it out as if the mom changing her name and his dad in jail as the reason why nobody could find his parents, at least that is how it came across. And then what? Within two minutes Billy’s new foster bro finds Billy’s real mom and dad? As I said, pretty lazy writing. They probably should have kept Billy as an orphan like in the comics.

What else did I have issues with? Oh, I didn’t like how when Billy and Freddy were trying out the Shazam powers how it led to nothing. They were basically just goofy little skits to get a laugh. I didn’t think the save-the-bus scene was that epic (Superman and Spider-Man already did it). The post-credit scene also came off lazy as it was just an extra “powers” scene they didn’t use; so “let’s put it at the end,” right, because Aquaman hit a billion? Speaking of powers, admittedly I am not a huge Shazam fan or uber knowledgeable about the character, but what happened to the “wisdom of Solomon?” Shazam was a dummy and more of a dummy as Levi than when he was Billy (my 15-year-old hated a lot of Levi’s lines, but my 11-year-old didn’t mind them), which brings me to…

Shazam and Billy were complete opposites and were nothing alike, which made them out to be two completely different characters. Billy was all mopey and Shazam was “golly-gee-whiz!” I suppose getting granted superpowers with a jacked body would make you a lot happier, so there is that, but the difference between the characters is really noticeable (my 15-year-old had more of a probem with this than I or my 11-year-old did). 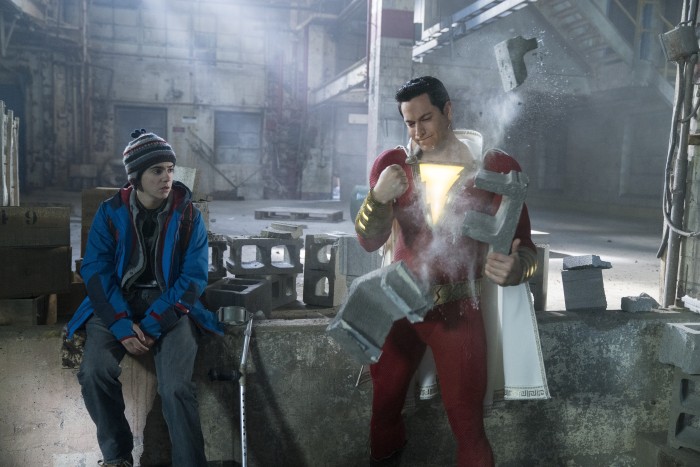 What else is wrong with the movie? The Seven Sins looked terrible. They came off as something out of a Ghostbusters movie or cartoon. They all looked and sounded the same. It was really hard to tell the difference between any of the characters, save for maybe Gluttony who had a big mouth. Also, the Seven Sins were hyped up by the Wizard as killing millions, but all they did was kill a half dozen or so people, and they didn’t come off as a big threat, IMO. Speaking of building things up, the boards of directors scene didn’t fit with the movie at all. Sivana throws his brother out the window (my fifteen-year-old looked at me and mouthed “WHAT?!”), lets his crippled father get beaten to a pulp (watch closely as the door closes), and the other board members die in horrific fashion (one Venom-like), and I don’t think anybody died in the rest of the movie (lol). The scene was way too over the top for the flick, and again didn’t fit with the rest of the film. They should have either continued with making the Sins out to be really, really bad (maybe influence humanity in some bad way or something?) or tamed the office scene down a lot (I’ll say my 11-year-old liked the Sins, but my 15-year-old and myself really didn’t).

I also didn’t like how Zachary Levi’s character wasn’t called Captain Marvel. The movie shows just how stupid it is that the character doesn’t have a name. He can’t introduce himself as “Shazam” otherwise he would revert to being Billy, so it kind of comes off really dumb. There were some funny moments about the fact he doesn’t have a name in the film, but it got old. I wish DC would have kept using the name. Marvel ruined the “Captain Marvel” name and character with Brie Larson and Carol Danvers, so it would have been nice to have kept DC’s Captain Marvel around. F’ Marvel Studios and Disney. 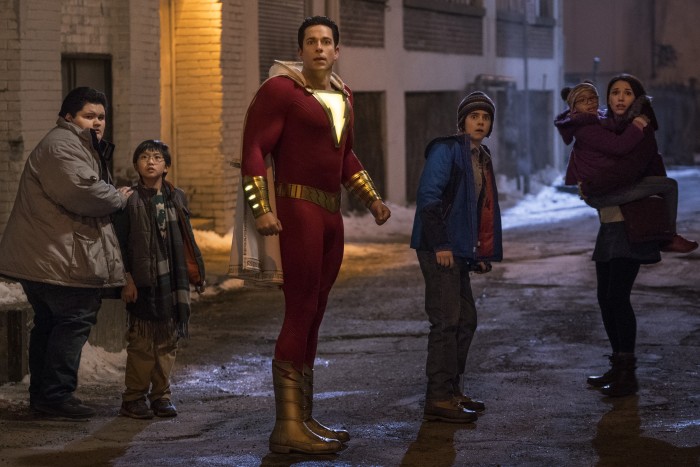 The Marvel family or the Shazam family or whatever they are called (Mary Marvel Shazam?? Sounds awful) I also didn’t like. I felt they – pardon the pun – stole Shazam’s thunder. You realize that all Shazam did was to defeat the weakest of the Seven Sins with Envy? A simple lightning bolt did the trick, and then he saved Sivana. Lame. Big let down and not an epic enough moment. I think they should have saved and teased the Shazam family (or whatever they are called) for the next film.

No surprise, but I also didn’t like the Superman cameo. It didn’t look like Cavill and I didn’t like the look of the suit. If Henry Cavill couldn’t have done the part, I wouldn’t have included the scene (the director explains things here). Part of me blames Cavill and part WB. If I was Henry Cavill and wanted to stick around as Superman, I would have done the cameo for friggin’ free. By WB not using Cavill here, I guess they are stating he may no longer be their Superman. Good luck to whoever replaces him.

Another small nitpick is that a lot of the cool footage that was in the movie was present in the trailers. I personally do not like watching trailers as they can spoil things, but I get that it since Shazam! is considered a risk they had to reveal a lot of cool moments to pull in the audience. 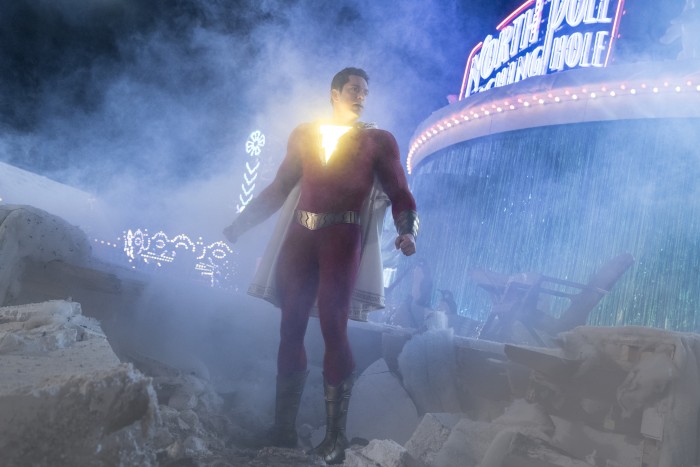 The casting was great. Mark Strong is an awesome actor and villain. Boy, what a great Lex Luthor he would have made. I also liked that they didn’t save Sivana and kept him as a villain. Shazam says something about how the Seven Sins are only using Sivana; so maybe you expect Sivana to realize this and that the movie might turn him into a good guy or something. Nope. And as we saw with that super cool mid-credit scene, they are possibly setting up Mark Strong to return as Sivana for another movie along with Mr. Mind. Nice!

Zachary Levi was a terrific Shazam. While he was corny and had a different personality than Billy, he still did a terrific job. I want to see Levi alongside the Justice League and get a reaction. That would be great stuff. I also want to see Levi in a sequel. Also, the Shazam suit looked really good. When filming started, set pics surfaced which caused the internet to go haywire, but the CGI for the film looked decent enough. I can’t really recall seeing anything that bad regarding the CGI, except for how the Sins looked (generic).

The rest of the cast was also really good. No problems with the child cast, though I did want to see Grace Fulton as Mary Marvel and not another actress (she is 22 years old in real life after all). Speaking of the Marvel family, it was cool to learn that Adam Brody played Super Hero Freddy and D.J. Cotrona played Super Hero Pedro, as the two actors were once cast for George Miller’s Justice League Mortal movie as Flash and Superman, respectively.

The use of the tiger was also a cool nod to Tawky Tawny, the “dimensional door scene” with the other villains, and the Mr. Mind cameos came off really cool as well. 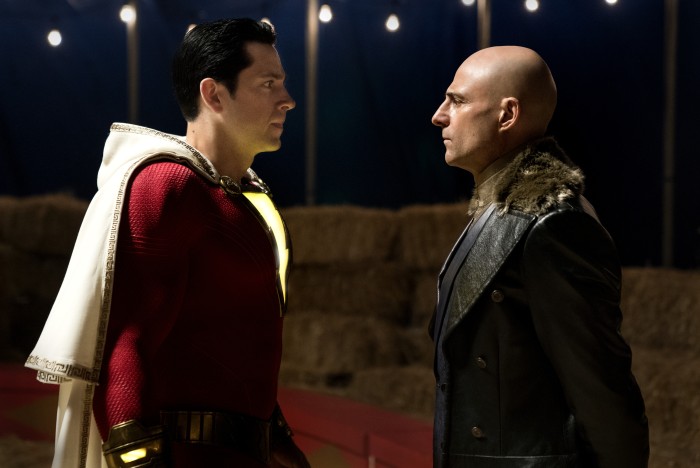 Shazam! is a fun and entertaining movie. It’s definitely more aimed at the family “popcorn” general audience crowd than it is at the hardcore comic fans; however, I always say that if you can please the hardcore fans you’ll please the popcorn general audience fans even more, which is something the Russo brothers excel at (hint, hint!), so hopefully with the next movie and with Black Adam they take the time to fix and smooth things out a bit. I give Shazam! around a 6-7 out of 10.