Recent comments made by James Gunn made it sounds as if his The Suicide Squad existed within the same universe as Matt Reeves and Robert Pattinson’s The Batman, but now the director backtracks on those remarks.

How it all started is when a fan asked if The Suicide Squad connects to Robert Pattinson’s Batman because the fan feels confused about what is going on with the DCEU as some films are not connected and some are, which saw James Gunn respond on social media, “Yes just like the comic books.”

So fans thought James Gunn was confirming that his version of Suicide Squad existed in the same cinematic universe as The Batman.

However, James Gunn took to his Instagram story to shoot back at claims that he did confirm Suicide Squad and The Batman are connected, as he posted, “I did!? When?”

Gunn also replied in a comment on Instagram, “I didn’t alter any comment, and I didn’t mean to make your page look bad. I just answered the first question too quickly without fully reading it.” 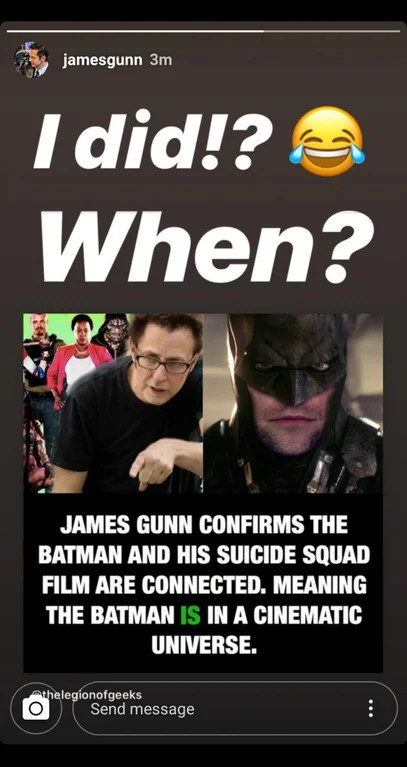 James Gunn The Suicide Squad may connect to The Batman

I suppose it should also be said that James Gunn didn’t necessarily shoot down the notion that his film connects to the Matt Reeves movie, as what is rather interesting, is that James Gunn has teased his flick is not a reboot or a sequel.

Rumors offer that James Gunn’s The Suicide Squad and Matt Reeves’ The Batman exist in their own universe, separate from the DCEU.

While at Comic-Con, DC insiders also told me that Gunn, Reeves and J.J. Abrams are involved with some sort of soft reboot of the DCEU, as Abrams will be doing Superman with a new actor.

So if The Suicide Squad and The Batman exist within a different universe we see why the same characters can be used, like Margot Robbie as Harley Quinn, which is because they are different versions of the character (fans know this to be the multiverse, which the upcoming The CW Crisis On Infinite Earths crossover is tackling),