It’s being claimed that Cosmic Ghost Rider may be coming to the MCU, possibly as part of Kevin Feige’s Phase 5 or 6 plans.

If you are not familiar with the character, it’s actually Frank Castle, The Punisher, who becomes the Spirit of Vengeance by making a deal with Mephisto, as well as Galactus (cosmic), and thus he becomes Cosmic Ghost Rider.

The character is rather goofy, and one that I don’t really like (baby Thanos is dumb, too), but following James Gunn’s goofy Guardians of the Galaxy movies, the goofy Thor: Ragnarok movie, the goofy fat Thor and goofy Hulk in Avengers: Endgame, Cosmic Ghost Rider would probably get a lot of laughs from Feige’s zombie MCU audience and fit right in. 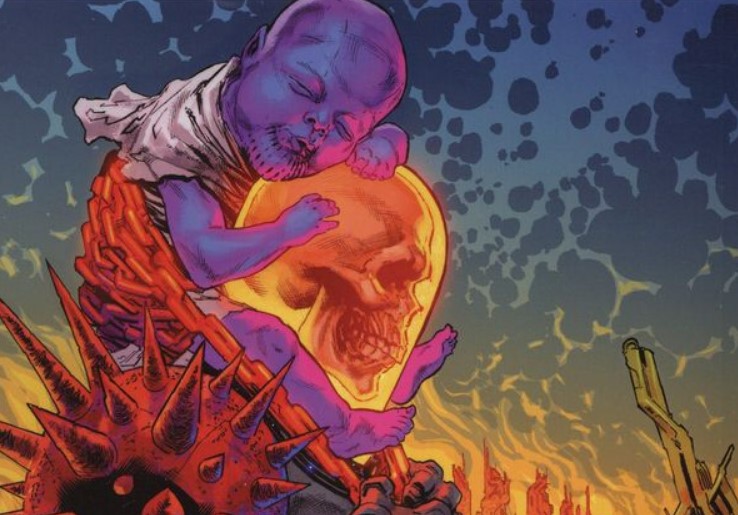 I’ll also say, if true, this doesn’t bode well for fans of Marvel Cosmic, as Feige, apparently, looks to continue to make the MCU cosmic stuff silly in order to appease a general audience that might not be able to grasp good science-fiction (at least Feige apparently thinks so judging by what we’ve had so far for the most part, sans Infinity War). That said, the Marvel Comics writer, Donny Cates, who created the character, recently used him in issues of the new Guardians of the Galaxy, which didn’t come off as being too bad, as it also featured the more popular and serious Marvel Cosmic characters in addition to a decent story. Still, this is Feige we are talking about who greenlit Captain Marvel and Phase 4, so don’t hold your breath.

Marvel TV (separate from Marvel Studios) does have plans for the Agents of SHIELD Ghost Rider on Hulu, which will be a new series that sees Gabriel Luna back as Robbie Reyes, the Spirit of Vengeance, as well as a Hellstrom series; so if you want a better and more horror-oriented version of Ghost Rider, Hulu looks to be the place to go for now.

Regarding the Netflix Punisher series starring Jon Bernthal, the general consensus is that isn’t a part of the MCU, though there are rumors Feige may be rebooting the Netflix and Daredevil actors into the MCU on FX (I’ve been told the opposite, that they will be recast).