Joining Superman in the land beyond was going to be the Caped Crusader, as Zack Snyder reveals his original DCEU plans included killing off Batman.

A fan posted a pic of Superman holding a dead Batman on the Vero social networking app noting, “What we may have seen in the 5 story arc… #releasethesnydercut,” with Zack Snyder replying in the comments, “Of course.” 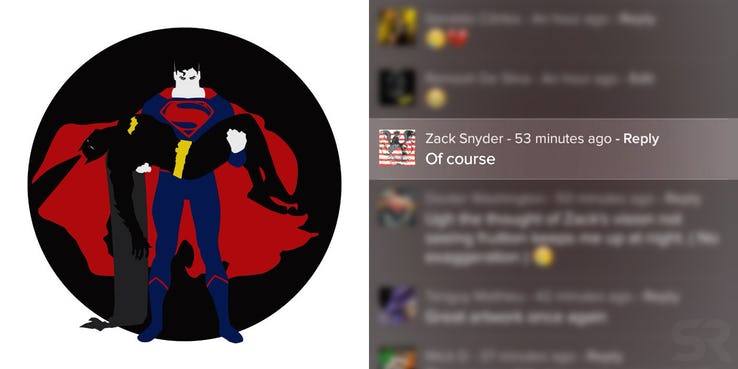 The first hint that Zack Snyder might be killing Batman actually came from Batman vs. Superman when a fan spotted three crosses as part of the Superman death scene, which is assumed to be for each of the Justice Leaguers: 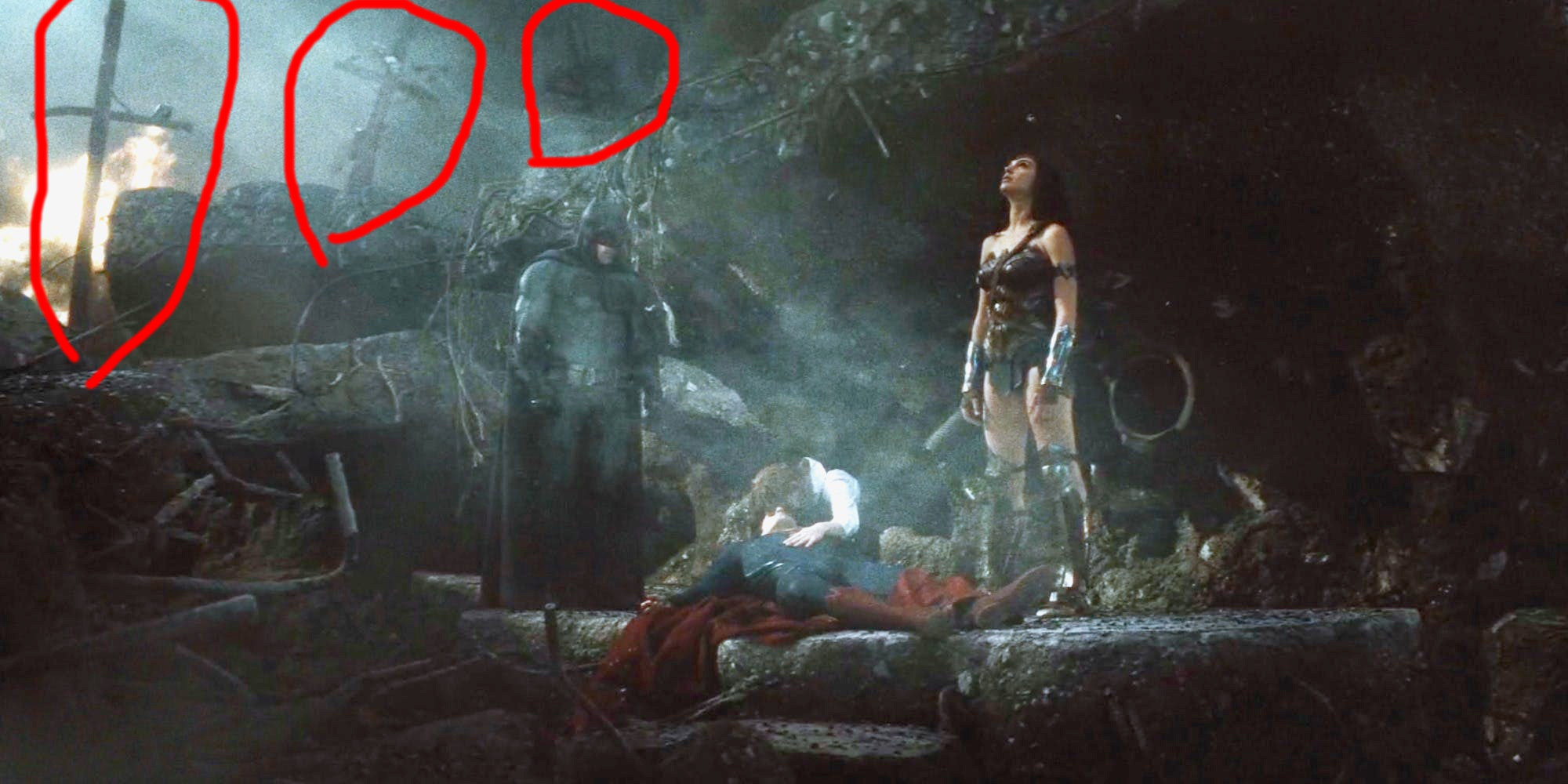 It is unknown how Zack Snyder was going to kill off Batman, but it may have had to do with Darkseid, who was cut from the Justice League movie.

A fan did confirm they saw a cut with Darkseid, albeit with unfinished visual effects, and Zack Snyder released the following storyboards of a Justice League movie Knightmare scene featuring Darkseid where he has a mother box and the Earth gets destroyed. We even see in this alternate future that the Hall of Justice would have been a part of the scene. This scene also ties into the Batman vs. Superman Knightmare scene as Superman joins forces with Justice League following something happening to Lois Lane and blaming Batman for the death (similar to the Infinite Crisis video game). The scene ties in with Knightmare Flash traveling back in time and warning Bruce that Lois is the key etc. Snyder also previously offered a look at the Knightmare Cyborg suit. 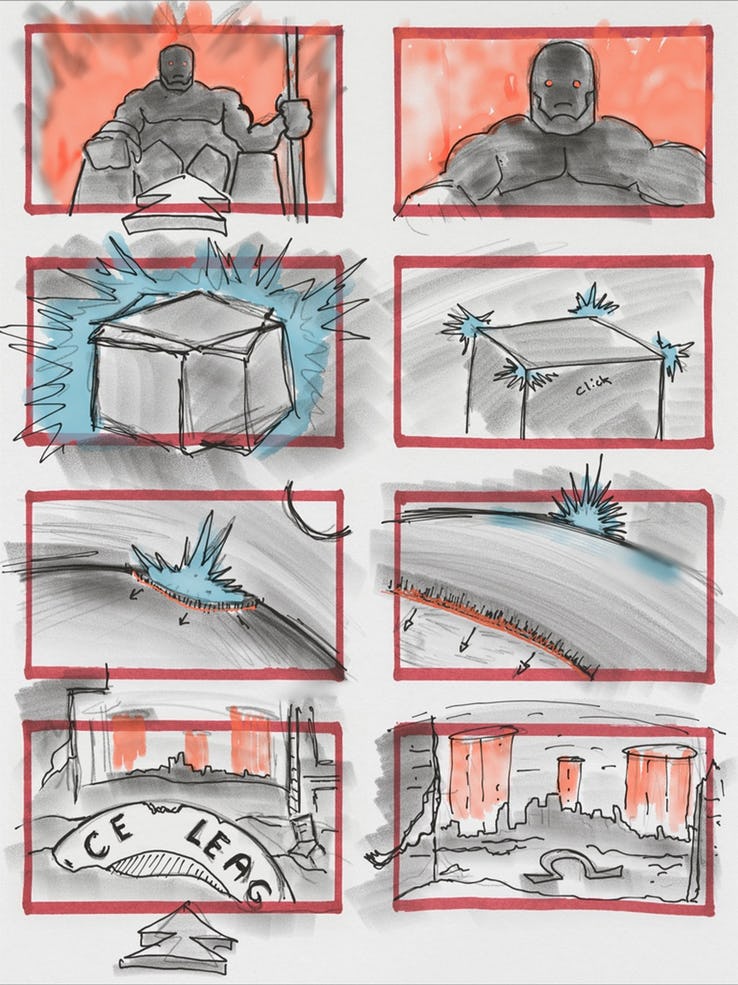 Regarding the death of Batman, possibly Darkseid may have something to do with it, as in the comics Darkseid “kills” Batman by shooting him with the Omega Beams and sending the Caped Crusader back in time with Dick Grayson taking over. What’s interesting about what Zack Snyder may have intended to do is that in the DCEU his Dick Grayson would have been dead as well, and Snyder was going to go with the Carrie Kelley version, so what exactly Snyder intended to do with Batman remains a mystery.

Interestingly enough, it recently became known that Batman isn’t protecting Gotham City in the Birds of Prey movie, with it rumored no one has seen Batman for around two years, which sort of fits in with Zack Snyder killing off Batman and would explain why he disappears.

Obviously when Batman vs. Superman didn’t perform up to expectations, Snyder’s plans were thrown out as Joss Whedon came on board Justice League and basically totally redid things, which was more at the direction of WB execs.

So taking a look at Snyder’s possible overall picture for the DCEU, he introduces Superman in Man of Steel, kills of Superman in Batman vs. Superman, kills off Batman and brings back Superman in Justice League, kills off Wonder Woman in Justice League 2 (referencing the three crosses), and then what? Bringing them all back for Justice League 3? While looking back now it seems like it may sound rather cool, but all the death, doom and gloom from movie to movie sounds a bit much. I wonder if Snyder’s plan also included an eventual Flashpoint movie, which is another really dark story?

We also know that Snyder had plans for a Man of Steel 2 as he previously revealed the ending featuring a box of kryptonite being dropped off at Wayne Manor, as the movie was not going to feature Batman, but this version of Man of Steel 2 eventually became Batman vs. Superman.

Prior to the release of Man of Steel, Snyder also interestingly enough let it be known his Superman was going to be a separate thing and not a part of the Justice League movie, and Snyder even said they would use two different actors (similar to what WB is now doing with Joker), so we see Snyder’s original plan may have been to do some sort of Elseworlds take on things, or he may have even wanted his stuff more self-contained and standalone much like the Christopher Nolan Batman movies (Nolan recommended Snyder to take over from him) so that the larger connected cinematic universe wouldn’t interfere. What could have been, eh?