It’s learned that Zack Snyder’s version of Batman is not only a complete coward but also something akin to a certain cat as it’s revealed the Ben Affleck Dark Knight would have been “completely afraid” of the Joe Manganiello Deathstroke.

And Batman would have needed Batgirl’s help. More on that below.

Joe Manganiello revealed new details about the Ben Affleck The Batman movie on the Phase Zero podcast (via CBM).

“There was like a big huge showdown, I think between Batgirl…Batgirl jumps in to try and help Bruce because Deathstroke is so fast,” revealed Manganiello. “He can anticipate Bruce’s movements.”

Manganiello went on to explain that Batman is “completely afraid” of Slade Wilson because “he met someone who can take him.”

“That leads to this big climactic battle through the streets of Gotham in the end. It’s like a real-life psychological thriller with Deathstroke. He was like a horror movie, like a shark, kind of like Jaws,” said Manganiello. 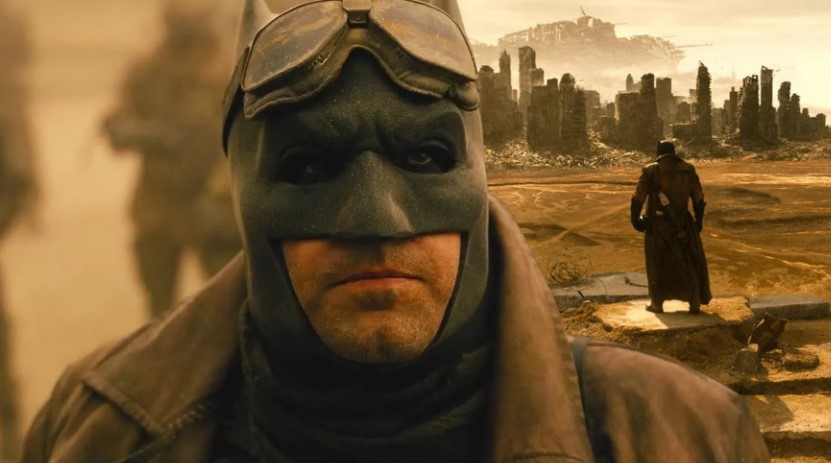 Batman is a coward

Regarding Batman being a coward, Zack Snyder recently spoke about his Justice League sequel plans where Snyder said his version of Batman, played by Affleck, wouldn’t have had the “courage” to save a pregnant Lois Lane which would have led to evil Superman and the Knightmare universe destroying the entire world.

“What happens in the post-apocalyptic world is, Cyborg works on an equation to use a Mother Box to jump Flash back in time to warn Bruce about this moment, where he didn’t have the courage to sacrifice himself to save Lois,” Snyder told Vanity Fair.

Snyder also further revealed plans for Batgirl in that Batgirl would have replaced a dead Batman – and get this – and would have even trained the non-powered son of Superman and Lois to be the new Batman, both of whom who told their son to be Batman.

“You see, I always wanted Barbara Gordon to come in the movies. Commissioner Gordon would be on the way out, and we’d have Barbara starting to play a bigger role. My idea was that after Batman sacrificed himself, there would be a window where there was no Batman, and I thought Barbara could fill that until the child of Superman and Lois, who has no powers, would become Batman when he was of age,” explained Snyder. “That was the idea anyway. It just seemed to make sense. Then, of course, Barbara could have been his mentor, but who knows? That’s all just… see now we’re just wishful thinking.”

An afraid and cowardly Batman? Does that sound like the Dark Knight to you?

Both Snyder and Affleck’s Batman plans have since been nixed as Matt Reeves has been brought in to take over with Robert Pattinson on The Batman.