It turns out I might be right after all as it is reported that Wonder Woman 3 looks to be years away which could mean that Patty Jenkins presently has an empty plate in regards to current films in development or anything in the near future.

Yesterday saw Deadline report that Patty Jenkins had exited her Cleopatra movie which is starring Gal Gadot, with the reason said because Jenkins is focusing on Wonder Woman 3 and Star Wars: Rogue Squadron.

So since it also has been reported that Star Wars: Rogue Squadron has been delayed indefinitely, and that Warner Bros. has stated Wonder Woman 3 has been fast-tracked, it seemed as if Wonder Woman 3 would be next from Jenkins and Gadot; however, that apparently isn’t the case.

The writer for Deadline who wrote the article about Jenkins leaving Cleopatra took to Twitter to offer that Wonder Woman 3 isn’t filming anytime soon as Justin Kroll says Wonder Woman 3 is not expected to film until 2023, which could mean the flick won’t get released until 2024 at the earliest:

One thing regarding Patty, while sources say Jenkins is expected to focus on development of WW3 now that she isn’t directing this, shooting is not expected to start till 2023 on WW3 at earliest given Gadot’s busy shooting schedule in 2022 that includes SNOW WHITE 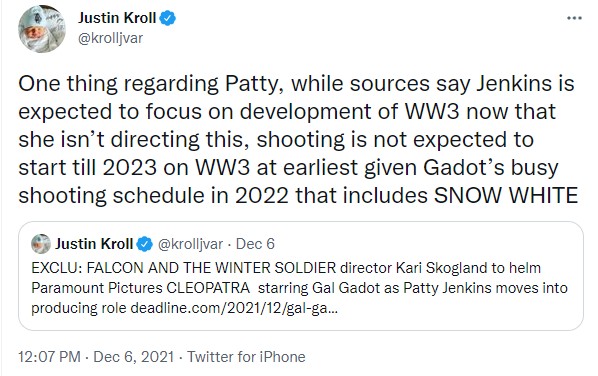 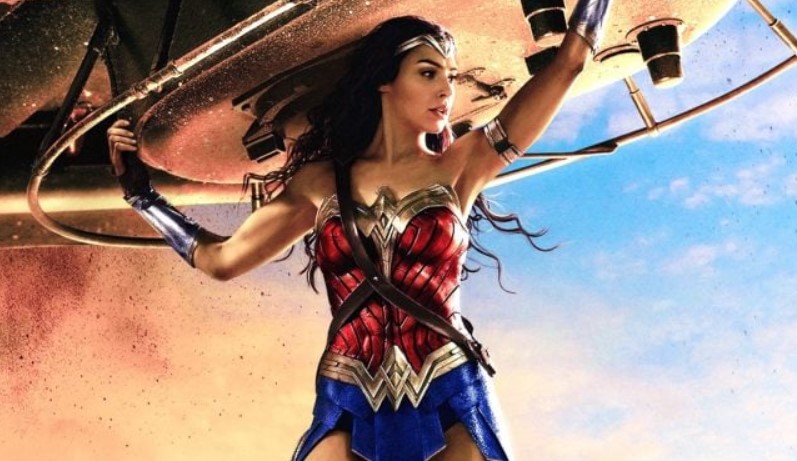 Gal Gadot has a full plate

So now that Patty Jenkins isn’t filming Wonder Woman 3, she presently has no films in development unless she can work out her “creative differences” with Lucasfilm over Star Wars: Rogue Squadron, which is supposed to be released December 22, 2023.

What I find interesting is that Jenkins signed on for both Cleopatra and Rogue Squadron prior to Wonder Woman 1984 bombing big time and now following the film having been released, she’s basically off the two movies she signed on for. Regarding Star Wars, a previous report made it sound as if Rogue Squadron isn’t going to happen, but the most recent report by Deadline about Cleopatra getting a new director did offer Jenkins is still attached to Rogue Squadron, so we’ll have to see how everything plays out.

Regarding Gal Gadot, she has a full plate as she recently starred in Netflix’s biggest movie of all time with Dwayne Johnson and Ryan Reynolds, Red Notice (great movie), and her upcoming films include Death on the Nile (completed), Heart of Stone (filming) and according to her IMDb, her next movie is Disney’s live-action Snow White where she is playing the Evil Queen, then Irena Sendler, followed by the Untitled Hedy Lamarr Project, then Cleopatra, and finally Wonder Woman 3 (has no release date). With Red Notice received so favorably, there is also talk of a sequel on Netflix where she will reteam with Johnson and Reynolds.