Watch the first clip above for Ultimate Spider-Man vs. The Sinister Six.

The new season kicks off this Sunday on Disney XD at 9am ET.

In season four of “Marvel’s Ultimate Spider-Man vs. The Sinister 6,” a confident Spider-Man feels like the ultimate hero after fighting alongside The Avengers and leading a team of heroes at S.H.I.E.L.D. Academy. However, when the wall-crawler discovers that his greatest enemies – Doctor Octopus, Hydra and the all-new Sinister 6 – are working together to destroy him and S.H.I.E.L.D., he teams up with a special new team of Spiders including Miles Morales, Agent Venom, Iron Spider and the mysterious new Scarlet Spider. Spider-Man and his new friends will need to use all of their power to overcome their greatest challenge yet.

This is pretty cool. A local news station was covering the recent flooding in parts of Chicago. As the helicopter surveyed the area, the anchorman caught a glimpse of a Hulk statue. Well, the owner must have been watching the TV station at the time… Check it out:

Marvel releaesd a preview trailer for Ultimate Spider-Man which features the return of the Guardians of the Galaxy.

Spidey teams up with the Guardians of the Galaxy once more in an all-new episode of “Marvel’s Ultimate Spider-Man” premiering this Sunday, July6 at 9:00 a.m. ET on Disney XD!

With Galactus recently appearing in the Ultimate Universe in Josh Fialkov and Leonard Kirk’s The Hunger, as well as the news that the Ultimate titles in November are getting replaced by the Cataclysm event, in addition to Ult. Spider-Man Miles Morales heading to the 616 U., that doesn’t necessarily mean that Marvel is doing away with it all.

14-year-veteran-writer on the Ultimate comics, Brian Michael Bendis, took to his Tumblr to responds to a fan’s question about ending the Ultimate Universe.

Please allow me to not comment on unsubstantiated rumors and let us tell our story. and please believe me when I tell you that I have been working on the ultimate universe for 14 years. as important as it is to some of you it is doubly doubly doubly important to me. if not more so. and I promise you that I will not let you down and I will tell the story worth telling.

can you imagine if there were someone at your job who just decided it was their job to spoil everything that you do?   and if they can’t spoil it they just make something up.

what’s funny to me is that no matter how many times these stupid websites are wrong, and they are wrong about half the time, people still believe what they read.

Does that mean it’s sticking around?

Miles Morales, the current Ultimate Spider-Man that Bendis replaced Peter Parker with, will be heading to the regular Marvel 616 Universe.

Today, Marvel released their November solicits where we see the listing for Cataclysm: The Ultimates Last Stand #2 features the news.

To get you caught up, the events from Age Of Ultron ripped up open a hole between the Marvel Universe and the Ultimate Universe, with Galactus going through which is currently taking place in issues of The Hunger.

CATACLYSM: THE ULTIMATES LAST STAND #2 (of 5)
BRIAN MICHAEL BENDIS (W) • MARK BAGLEY (A)
Cover by MARK BAGLEY
Variant Cover by TBA
The ULTIMATES discover where GALACTUS has come from
If they send the WORLD DESTROYER back to where he came from all that will do is create more destruction and havoc!
MILES MORALES is headed to the Marvel Universe
32 PGS./Rated T+ …$3.99

At the Marvel Television panel that was just recently held at the 2013 Comic-Con it was announced that the Ultimate Spider-Man animated series has been renewed for Season 3 on Disney XD.

Footage was also shown from an upcoming episode of Avengers Assemble that revealed Hyperion taking on the Avengers. Hyperion’s alternate Earth is destroyed with the hero now here to save our Earth. However, Hyperion’s form of justice is different than the Avengers as the member of the Squadron Supreme tries to literally take out The Wrecker, with the Avengers attempting to stop Hyperion.

The earlier Guardians of the Galaxy animated art that Cosmic Book News revealed is now known to be a part of the Ultimate Spider-Man cartoon with the episode set to air tomorrow written by Bendis.

For the full rundown of the Marvel TV panel you can catch the official recap of the live blog.

Below you can follow along live the Marvel Television Presents Comic-Con Panel which kicks off at 1:30pm ET.

It’s the biggest, most animated Marvel Television panel ever! Join Marvel’s Head of Television, Jeph Loeb, for the latest from inside Marvel Universe on Disney XD, including what’s next for “Marvel’s Ultimate Spider-Man,” a brand-new episode of the hit series “Marvel’s Avengers Assemble,” and the World Premiere of “Marvel’s Hulk and the Agents of S.M.A.S.H.”

The latest issue of the Guardians of the Galaxy comic book made mention of an animated show in the works.

Marvel Cosmic fans didn’t really think it was true because it came from Editor Stephen Wacker.

Now the following image has showed up in my inbox.

Could be a cool piece of fan art or something else all together.

Update: Looks to be art for the Disney XD Ultimate Spider-Man series.

Marvel released the final “Mighty” Infinity teaser which reveals the addition of White Tiger from Avengers Acacemy (and Ultimate Spider-Man toon) and the younger Power Man from Shadowland.

White Tiger, a character that some have seen on the ‘Ultimate Spider-Man’ cartoon and who others know from ‘Avengers Academy’ is ready to step up and take her place as a full-fledged individual hero and not just a hero in training or somebody that’s trying to live up to the reputation of their sibling but becomes a full hero in her own right. Similarly, our other character, Power Man — Victor Alvarez — a young character who first appeared during ‘Shadowland,’ a protege of both Luke Cage and Iron Fist, he too is going to going to get the chance to show what he’s made of in a big way as these characters come together and ‘Infinity’ washes over the face of the Earth.

Full details on the new team and series have yet to be released.

Disney XD has set aside a special night for the Ultimate Spider-Man season 2 premiere that takes a page out of the movies with the introduction of Electro and The Lizard.

Monday, Jan. 21 at 7 p.m will see the one hour 2-part premiere featuring Electro and the Lizard as well as Joe Quesada’s “Marvel Comics Close-Up.”

The series then debuts new episodes on Sundays at 11am ET.

Disney XD’s new Marvel animated cartoon, Ultimate Spider-Man, will see the Guardians of the Galaxy guest star, with the episode written by Brian Michael Bendis, the recently announced new writer on the comic book of the same name.

In an interview with Marvel.com – where Marvel refers to Rocket Racoon as a “joke” character – Bendis spills the news.

Marvel.com: Brian, hearing you talk about Rocket Raccoon reminds me of you talking about Squirrel Girl, and when you added her to NEW AVENGERS, almost taking someone that could be a joke character and treating them semi-seriously. Is there any connection there at all?

Brian Michael Bendis: Absolutely! This is what I say, people that like what we did with Squirrel Girl in the end, particularly that issue that Mike Deodato drew that focused on her solely, we’re certainly going to build to that with Rocket. He’s a funnier character than Squirrel Girl, just in general. We have a lot of love for him and we’ll be dealing with him front and center. And also, I got to write the Guardians of the Galaxy episode of the “Ultimate Spider-Man” cartoon that’s coming out next year, so you’ll be seeing a little bit of that there too.

The Ultimate Spider-Man cartoon also features the new Nova, Sam Alexander, with a new comic book to boot as well, that was also recently announced by Jeph Loeb and Ed McGuinness.

We also know Guardians of the Galaxy was cancelled as well to make way for Bendis cosmic or X-Men cosmic or whatever it may be (Moon Knight Cosmic?).

And a lot of fans aren’t happy.

Thanks to Doug Smith and the Nova Prime Page for the pic. 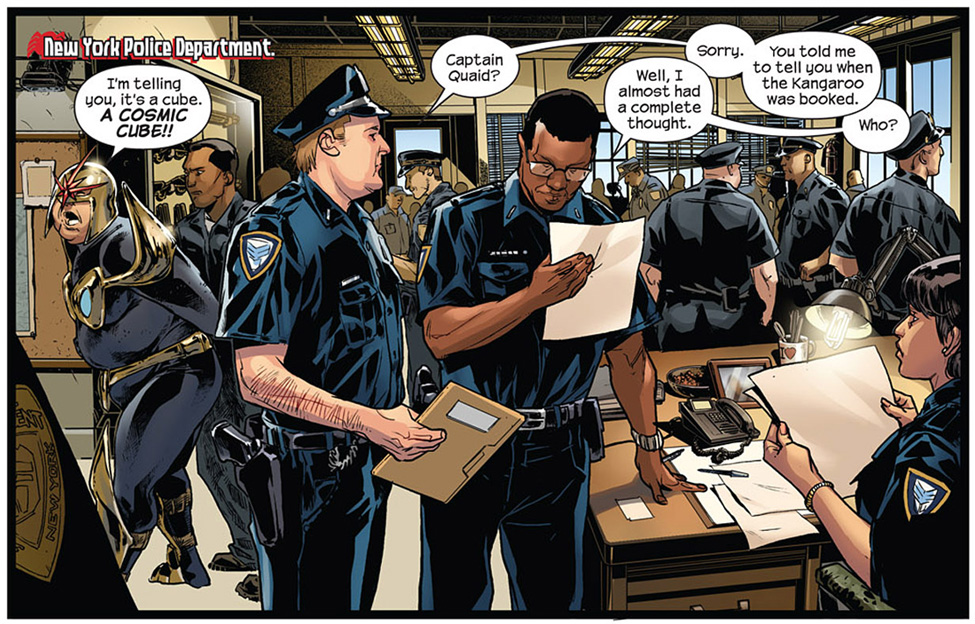 [[wysiwyg_imageupload:1733:]]Cosmic Book News was the first to put forth that Spider-Man might be appearing in The Avengers movie.

It wasn’t much of a stretch seeing how Sony and Disney had come to a deal on the rights for Spider-Man.

Sony kept the film rights and Disney the merchandising rights.

So any promotion on either company’s part would obviously be beneficial for both sides.

Obviously we know that Spidey didn’t appear in The Avengers movie, but how about a sequel?

Could be a possibility as Amazing Spider-Man producer Avi Arad doesn’t rule it out.

CraveOnline, who spoke to Arad about the Venom Movie, has it as:

Now that The Avengers is such a phenomenon, he is even open to considering making a deal between Sonyâ€™s Spidey and Disneyâ€™s Avengers. He says he thought of the Venom crossover possibility independently of Avengers though.

â€œEverything is possible,â€ Arad said. â€œIf something like that happens, itâ€™s great for Disney, itâ€™s great for Sony. If the right story comes in, we are now working on Venom first. Itâ€™s our first out. So our thinking is in the right direction. Avengers to me was an expected success so I never looked at it because Avengers was successful.â€

The way to make team up movies work, Arad says, is to create the raw materials, both technically and creatively, in other movies first. â€œTeam ups can happen once you create the character, establish the CG, otherwise itâ€™s not affordable.â€

Heck, even Andrew Garfield said he wants to be in The Avengers 2.

Going one step further, how about an Avengers appearance in the Amazing Spider-Man movie?

And, of course, Spider-Man is an Avenger in the Marvel comic books.

[[wysiwyg_imageupload:1641:]]After a great episode of Marvel Cosmic madness on Avengers: Earthâ€™s Mightiest Heroes, it is a real shame and a let-down in watching this weekendâ€™s Ultimate Spider-Man toon on Disney XD.

I am all for a jolly old-fashioned time watching the Hulk and Spider-Man rumble through Manhattan while Spidey quips and twips and Hulk smashes. Add the energy monster Zzzax to the picture as well as cub news reporter Mary Jane Watson trying to video tape it all and it sounds like a nice leisurely adventure. Right?

I cannot say what it is about this show, but the danger never seems real because even at the climax of the show Spidey is still quipping. Now I know the hero is known for his jokes and continual trail of puns, but this just keeps the drama of the fight from getting anywhere.

In the comics, Peter knows when to shut it and get to work. In this adventure, it was almost like one of those â€œMarvel Smash-upsâ€ they have where it is supposed to be humorous. Hulk liked Spidey way too soon, and the threat of Zzzaxx wasnâ€™t known until almost two-thirds of the way through the cartoon.

I know this is kidsâ€™ fare, but with great presentations like Avengers: EMH and Green Lantern: TAS, Ultimate Spider-Man better search for some new initials behind its moniker except D-U-L-L.

[[wysiwyg_imageupload:1611:]]Disney XD released a preview clip for the next episode of Ultimate Spider-Man which stars the Hulk!

Spidey finds a way to convince the Hulk to team up in this clip from this weekend’s new “Ultimate Spider-Man,” premiering Sunday morning at 11:00 a.m. ET inside Marvel Universe on Disney XD!

Check out a preview clip for episode 5 of Disney XD’s Ultimate Spider-Man.

Spidey’s got a new suit courtesy of Iron Man, and he isn’t afraid to put it to use in Sunday’s all-new episode of “Ultimate Spider-Man” at 11:00 a.m. ET inside Marvel Universe on Disney XD!