Ryan Reynolds and Hugh Jackman joke on social media about the X-Men and Deadpool movies getting a Disney Plus release.

Hugh Jackman posted on his Instagram account on Saturday about how X-Men: Days of Future Plus will air on Disney Plus.

“Days Of Future Past becomes the first movie to air on Disney+ uncensored. That was my future but let’s be honest … it’s more like my past,” posted Jackman referring to his nude scene which was actually removed in India when it was released back in 2014.

The comment was quickly replied to by Ryan Reynolds.

“Excited for them to do the same for Deadpool. It’s time children knew. #Samesies,” said Reynolds.

Obviously, Ryan Reynolds is having fun as the Deadpool movies are R-rated, while the X-Men flicks are PG-13 and Disney Plus is considered a family-friendly streaming service and only shows content that is PG-13 or under.

The latest regarding a Deadpool 3 movie is that it apparently isn’t happening anytime soon at Marvel, as reportedly, Kevin Feige recently passed on Reynolds’ pitch for a new flick.

Rumors now offer Ryan Reynolds may suit up as Green Lantern in the Snyder Cut of Justice League and The Flash movie for DC.

A PG-13 Deadpool 3 has also been rumored for the MCU instead of an R-rated version.

Feige has also recently confirmed the X-Men are years away in the MCU. 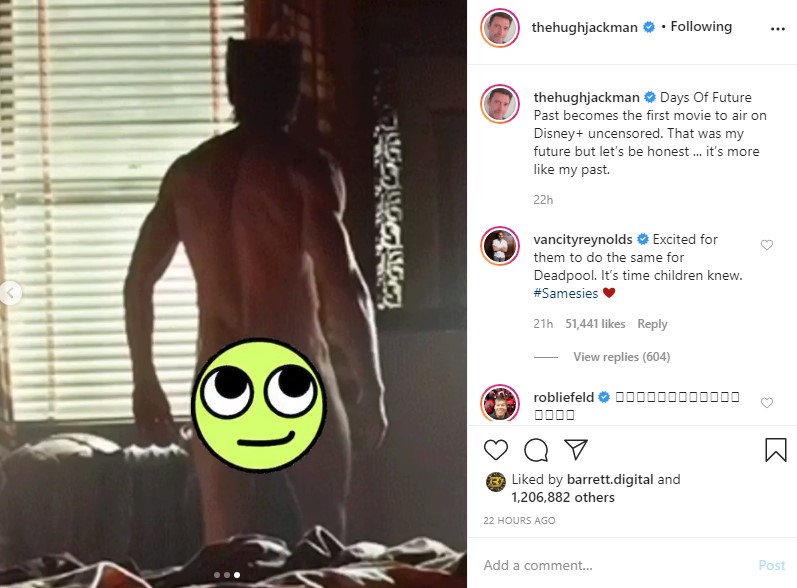 Days Of Future Past becomes the first movie to air on Disney+ uncensored. That was my future but let’s be honest … it’s more like my past.