Leave it up to Deadpool actor Ryan Reynolds to get things right as Reynolds posted a funny video on Instagram mocking fellow celebrities.

There was that video from Vanessa Hudgens which saw her “like” rant about the coronavirus and how long it could last.

A couple of days ago saw that cringe-fest-induced video put out by Gal Gadot where celebrities sang John Lennon’s “Imagine,” offering what would a world be like with no possessions, as they sang from their multi-million dollar mansions.

Then Sophie Turner looked rather stupid as she said “f’ freedom” while posting a video using a goofy Snapchat filter.

There is also the son of Tom Hanks who put out some bizarre Illuminati video and then days later posted another video with girls wearing bikinis.

While Ryan Reynolds doesn’t specifically say it, I can: No one wants to hear or gives a sh-t what these celebrities think, especially in times of trouble. They don’t have anything to worry about, but the average person has a heck of a lot to worry about, especially if you are living week-to-week.

I also give Ryan Reynolds and his wife, Blake Lively, a lot of credit as they have donated a million dollars to charity for coronavirus relief.

Another important message from an important celebrity. Let’s spread the word, not the virus. I happily nominate @stevenpage @terry_n_reynolds and @sethrogen – #FlattenTheCurve #StayAtHomeSaveLives 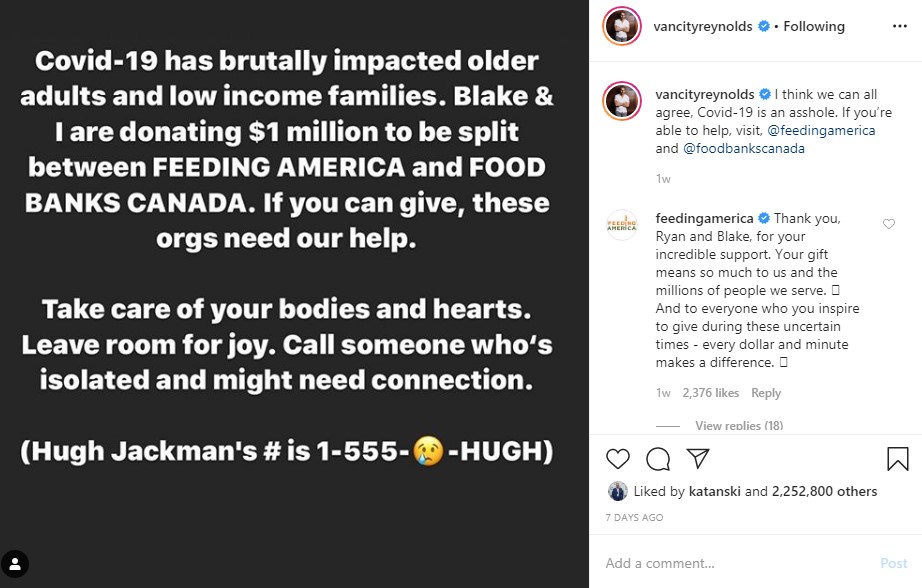