A new rumor has landed online regarding Robert Pattinson getting Zoe Kravitz pregnant while having sex on the Batmobile during filming on The Batman which has taken Twitter by storm.

This will be hilarious if true, but the rumor was posted to 4Chan and while it does sound rather out there, the rumor has gained traction on Twitter as fans are wondering if it's true.

"The Batman in big trouble," states the rumor which says:

I'm working on the set of Batman. So, in about a week or so all media will go after him for what he and Zoe did on the set of The Batman last week... We (me and a lot of workers with Mat Reeves) caught Robert Pattinson and Zoe Kravitz having sex on the Batmobile prop. It's probably one of the worse things I've ever saw in my career now, Matt was so furious he interrupted them. And that's not all, Zoe took a pregnancy test and she is pregnant and everyone believes it's Pattinson's, since October Robert and Zoe started dating in secret, we know about it as we saw them together after work. She recently divorced her husband tho. I'm purely disgusted bu their act, both her and Pattinson. All I know is he that Reeves is so furious he might not do The Batman 2 and 3 as he planned and let someone else direct. He literally told Pattinson, 'You are the most entitled narcissistic actor I've ever worked with, you go back to work, we finish filming in March and then we are done. I don't want to ever work with you after this film.' He even said he refuses to do reshoots if they will be needed. I don't know what they are gonna do but they try to keep this situation on leash before the media will make it official. 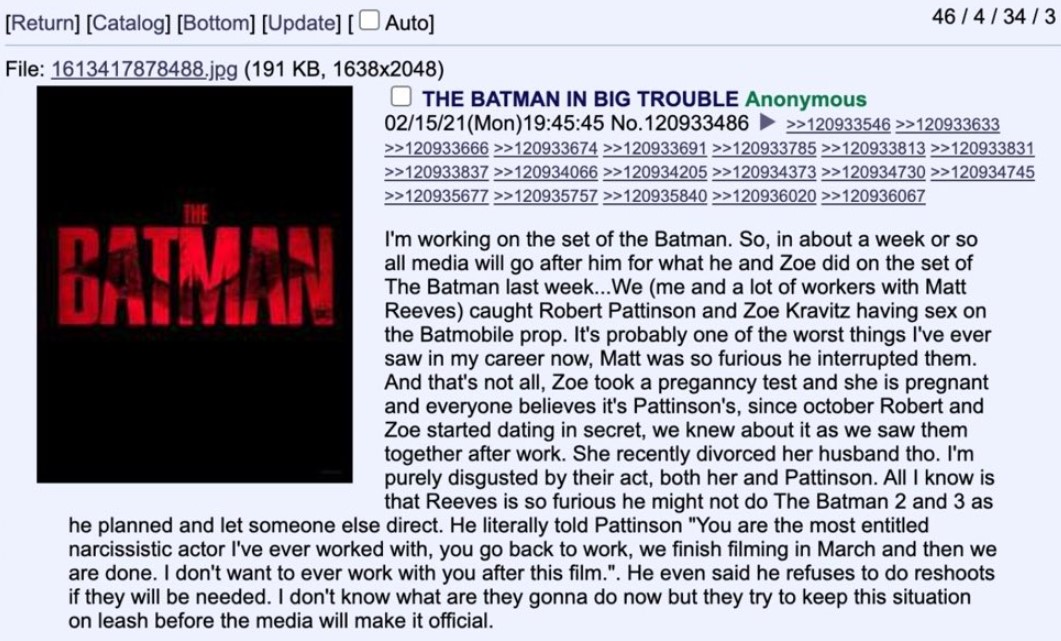 The Batman problems with Robert Pattinson and Matt Reeves

A screenshot of the 4Chan post has been liked and retweeted hundreds of times on Twitter as fans discuss the possibility it's true which follows earlier rumors that offer there have been problems on the set of The Batman involving Robert Pattinson and director Matt Reeves.

A Hollywood writer and director confirmed problems on the set which at the time were said to be due to Matt Reeves not being happy with how Pattinson showed up to film without having worked out, and it's been said Pattinson's COVID diagnosis was faked because of the issue.

A recent rumor from December also offered that Robert Pattinson was ready to quit The Batman because of Reeves being a control freak.