While Star Wars fans are canceling their Disney Plus subscriptions in droves, it's suggested that Pedro Pascal may exit The Mandalorian, which follows Gina Carano getting fired from the series by Disney and Lucasfilm.

It's also suggested that The Mandalorian may be canceled and that a Season 3 will not happen.

YouTuber Grace Randolph has put the puzzle pieces together in a video posted Thursday titled "Gina Carano Fired, Pedro Pascal to HBO's The Last of Us, Mandalorian Season 3?"

Randolph goes over the news of Carano getting fired, which just may tie into the news of Pedro Pascal landing the lead role in HBO's The Last Of Us series.

Before we dive into things, there still may be hope yet that the situation with Gina Carano can be rectified, perhaps similar to what happened with James Gunn whose "indefensible" tweets were at least 104 times worse than anything that Carano posted on social media which saw Gunn hired and then rehired following the backlash to his dismissal. More on that below. 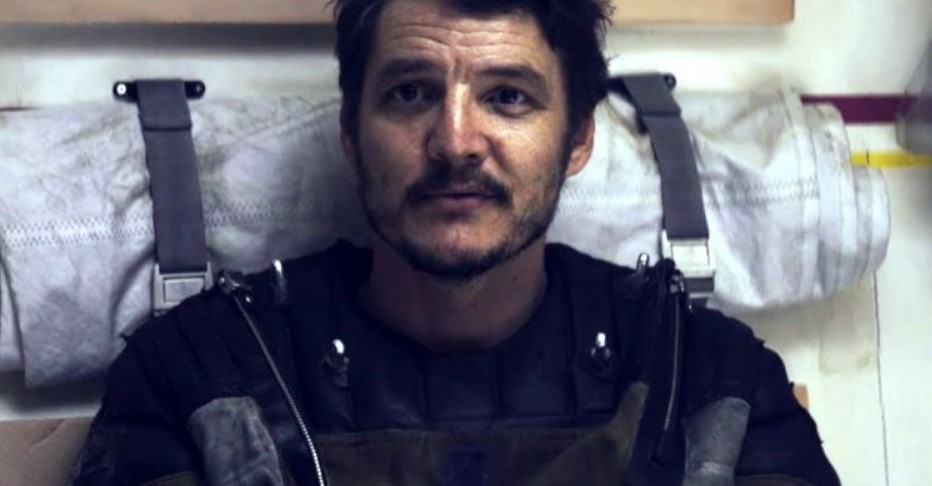 Pedro Pascal starring in HBO's The Last Of Us

Regarding a possible connection between the news of Carano getting fired from The Mandalorian and Pedro Pascal starring in HBO's The Last Of Us, the news of Pedro Pascal was first posted by Deadline, which was immediately followed by the news of Gina Carano (note: the publish times have since changed, possibly due to edits made on the articles, but regardless, they were basically posted one after the other): 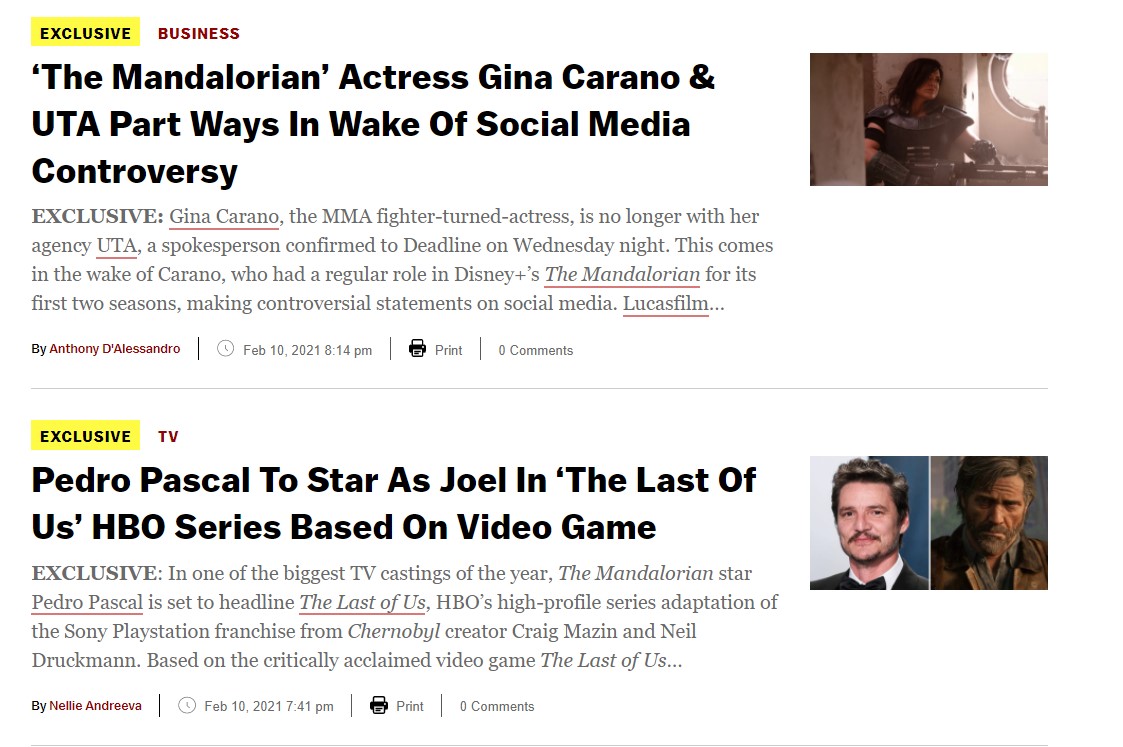 While to the untrained eye it may seem as if Deadline is simply posting articles, it's more than likely that some sort of message is being sent, as the two articles were published prior to Disney's Q1 2021 earnings call.

Recall that it was Grace Randolph who also said there were major, major problems on the set with Pedro Pascal while filming The Mandalorian Season 2, and just as Randolph said would happen, Season 2 took a major turn halfway through when Mando was shown minus the helmet, which didn't fit at all with the events and story from Season 1. Season 2 also ended with that Luke scene, as well as Baby Yoda leaving, which, as Randolph has pointed out, many fans suggested felt like the end of the series.

It's guessed that Pedro Pascal isn't at all happy with Disney and Lucasfilm and that Pascal has gone back home to Warner Bros. as a result, where Pascal was featured in HBO's Game of Thrones as well as the recent Wonder Woman 1984, where some fans think his performance as Max Lord was the best in the movie.

What is interesting about the Deadline article about Pedro Pascal joining The Last Of Us is that it states Pascal has downgraded the importance of Disney's The Mandalorian and opted for HBO's The Last Of Us to be his main focus:

The Last Of Us has him in first position.

What is also interesting about the article from Deadline is that it has been edited to where it first stated "he could continue on the Star Wars series" to "he will continue on the Star Wars series," which implies that the writer of the article had some sort of inside info about Pedro Pascal possibly not continuing with The Mandalorian Season 3, but likely was told by Disney reps to fix it (Deadline is basically the official-unofficial outlet for Hollywood news and gets all their info spoonfed to them).

The Deadline editors should have really explained the correction but for some reason chose not to:

So the first article by Deadline offers that Pedro Pascal has gone back to HBO to star in The Last Of Us, which will take precedent over Disney's The Mandalorian (even though Pascal signed with Disney first and has already done two seasons), and the article also at first suggested that Pascal may not continue with The Mandalorian Season 3, but "corrected" their information to state Pascal is is still a part of the show.

Following the Pascal article (or immediately preceding, again the publish times have since been changed), Deadline posted the Gina Carano article where she is leaving Disney.

The article by Deadline was also posted a minute after the same article by The Hollywood Reporter and followed seven minutes by Variety, with all three owned by the same company (see how it works?).

What probably happened is that Deadline, THR, and/or Variety were tipped off about Carano getting fired, which saw Disney release the following statement (and given the info about Pascal at the same time, so it was a two-punch message aimed at Disney):

“Gina Carano is not currently employed by Lucasfilm and there are no plans for her to be in the future. Nevertheless, her social media posts denigrating people based on their cultural and religious identities are abhorrent and unacceptable.”

Wow! What a story. Now if you follow my coverage regularly, the last few hours and even months haven't been a surprise to you, but what is interesting is the level of play revealed over the last 24 hours. I believe that all four parties are going to come out of this quite well, and some of these parties have navigated the situation particularly aggressively and impressively because Disney has basically allowed two of its actors to shape their own exit narrative.

Is Pedro Pascal done with The Mandalorian now that he's the star of HBO's The Last Of Us? Deadline which broke the story late last night on the eve of Disney Investor Day - I wonder why it was important to get it out before Disney Investor Day? - but the article said that Pascal 'could' continue. That's the word they used but that The Last Of Us is his priority. They also said that Pascal recently became - and this is very interesting as well - available for a new series, which is interesting because it's highly unusual for the star of a flagship show to join another show especially for a competing studio and [streaming] service...

So I believe if Pedro Pascal was locked in for The Mandalorian Season 3, which doesn't have any contracts in place based on the language that Lucasfilm used to describe the Gina Carano situation, well I believe the article would have stated definitively that he was doing both if that was definitely what was going to happen as of right now; so we'll see what happens. We'll see how this develops, and again as I said this could always be a first time [where an actor stars in two series] but it would be weird for him to star in such big important shows for again two very competitive not only studios but streaming services. 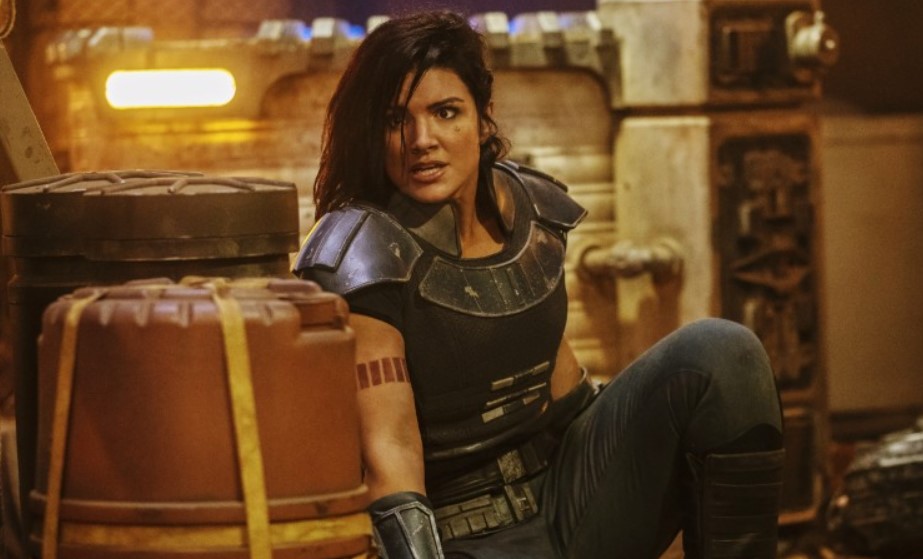 Regarding Gina Carano, Grace points to the article from THR where it confirms the rumors that Disney has wanted to fire Carano for months (according to the rumors it was Jon Favreau who saved her) and says that the original plan was to have Carano star in Rangers of the New Republic but due to previous tweets Disney changed its mind. Via THR:

They have been looking for a reason to fire her for two months, and today was the final straw,” a source with knowledge of Lucasfilm’s thinking tells THR.

According to sources, Lucasfilm planned to unveil Carano as the star of her own Disney+ series during a December investor's day presentation but scrapped those plans following her November tweets. Multiple Mandalorian spinoffs are in the works from executive producers Jon Favreau and Dave Filoni, including Rangers of the New Republic, which could have potentially starred Carano.

Grace thinks Carano knew she wasn't going to get Rangers of the New Republic and decided to post on Instagram Story what she did in order to give herself an out, and we can also add while still remaining loyal to her Star Wars fans (note: Disney had no problem with Pascal's own Nazi tweets and had no problems with racist tweets from another employee whom they officially backed on social media).

Now regarding Grace stating that all four parties are going to win (Pascal, Carano, HBO, Disney/Lucasfilm), Grace thinks Carano might get a gig with a conservative news network.

Pascal and HBO win with The Last Of Us, with Grace suggesting Disney wins because of all the Star Wars series they have coming out which includes Obi-Wan, Boba Fett, Ahsoka, etc., but Grace and Disney may not have counted on the Carano fans who happen to have disliked The Last Jedi which caused a myriad of Star Wars problems at Disney including but not limited to box office failures, and a large drop in merchandise and Disney Parks revenue. Ironically, the failure of The Last Jedi also led to The Mandalorian and the return of Luke Skywalker, but we see the problems never went away, which is of course Kathleen Kennedy. 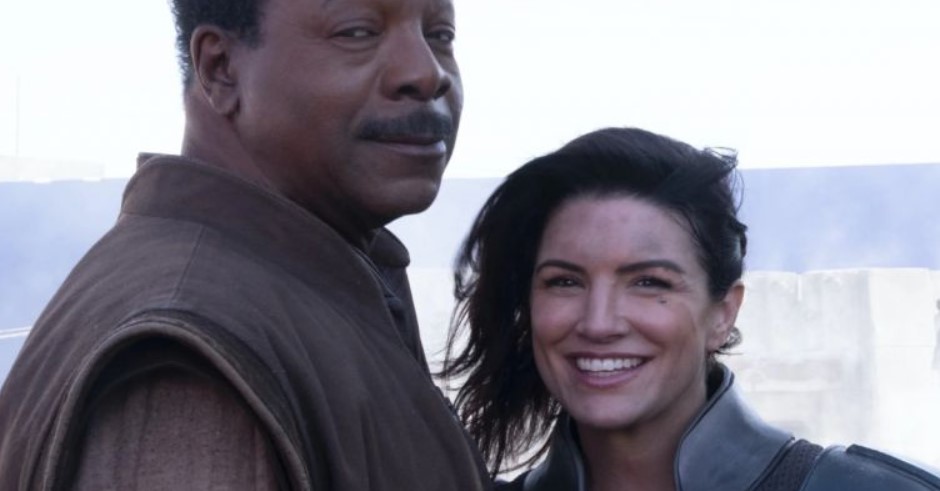 Gina Carano could still be saved

While Star Wars fans may have thought The Force was getting balanced with the release of The Mandalorian, the introduction of Baby Yoda, and the return of Master Luke, but may think the potential departures of both Gina Carano and Pedro Pascal may have thrown all of that into the shaft of the Death Star, there still may be hope yet.

According to YouTuber Doomcock, Disney is considering un-canceling Gina Carano and is "reeling" from all the fan backlash.

It's guessed the different camps at Disney, most likely Favreau's camp, and more than likely investors that weren't happy with what happened to Star Wars following The Last Jedi (including Hasbro), back Gina Carano and want her to return as she is such a fan-favorite actress and character.

So here is what I just learned about the situation as it stands with Gina. I've been informed, and again this has been confirmed by three different sources, but again please take this with a grain of salt since I can't confirm it, that Disney had planned to get rid of Gina for weeks now but the key thing here is they wanted to fire her after the Quarter 1 investor call (afterall, how good does it make you look to fire the biggest star, the most popular character in your entire franchise? Fill investors with confidence much? Not so much).

So I am told that someone who shall be nameless leaked the information of Gina being fired ahead of the investor meeting in an attempt to save Gina Carano's job. It was a last ditch effort and it was hoped, according to sources, that the uproar and fan fury over the firing would give Disney pause, force them to answer akward questions at the investor call, and apparently this plan might well be working.

I am told the reaction on the part of angry fans has been so overwhleming Disney may walk back the firing of Gina Carano. They may try to spin this as a leak that was not approved by Disney. They may try to say that this was all a mistake. It was not an officially approved press release and they had no plans to fire her. My sources say the situation is very fluid, very dynamic and evolving rapidly.