Things are getting ugly as the head of the DC films, Walter Hamada, is being brought in to refute what Heard said last week.

Things are getting real ugly surrounding the Aquaman movies as it is learned Johnny Depp and his legal team may be dropping a big bomb and are rebutting Amber Heard's recent Aquaman comments by bringing in the head of the DC Films, Walter Hamada, to testify on Tuesday.

Last week saw Amber Head claim that she had to fight in order to keep the part of Mera in both Aquaman and its sequel, Aquaman and the Lost Kingdom, which made it sound as if Johnny Depp was to blame for her possibly losing the role, and she also said she was released from her Aquaman contract and fought to stay in the sequel.

So now Deadline is reporting that as a result of Heard's comments about Aquaman, Depp and his legal team are bringing in Walter Hamada to rebut those comments by testifying Amber Heard "suffered no negative reaction from Warner Bros in her Aquaman franchise role as a result of the ongoing explicit and soiled laundry filled legal action from Depp."

It's said Walter Hamada will appear via virtual video to offer up his testimony as a rebuttal witness for the fired Fantastic Beasts star on Tuesday, which means Hamada will refute the testimony of Amber Heard's claims surrounding the Aquaman movies.

Last Thursday also saw Heard’s agent, Jessica Kovacevic, testify that Warner Bros. claimed it was Heard’s "lack of chemistry" with her Aquaman co-star Jason Momoa that almost got her removed from the movies, and that the reason Heard didn't go on to become a big success following the first movie, which hit a billion at the box office, was due to all her negative publicity.

Kovacevic said in her opinion that the studio didn’t "want to hire someone who has bad press," adding, "No one wants that association." 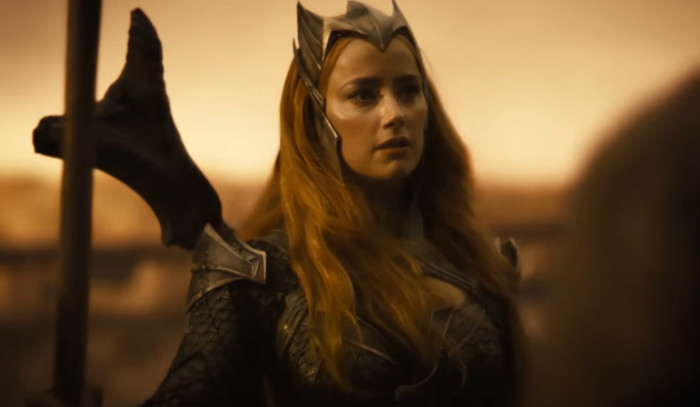 What's interesting is that Amber Heard previously testified she received a $2 million payday for Aquaman and the Lost Kingdom, which was double the amount she said she received for the first film, however, what could be the nail in the coffin, and I don't think it has been brought up at all in the trial, but maybe it's something Hamada might testify about, is that Zack Snyder brought back Amber Heard as Mera for the "Snyder Cut" of his film for HBO Max, which is something I believe was in addition to her three-picture DC deal, and we can also add that if the "Snyder Cut" would have been successful enough to warrant spinoffs, that Zack Snyder's Justice League sequels (again, a separate project than the 2017 theatrical release) would have also featured more of Amber Heard as Mera.

Heard actually testified her three-picture deal included the first Justice League, Aquaman, and Aquaman 2, but made no mention of appearing in the "Snyder Cut" for HBO Max and again, I believe her "Snyder Cut" appearance was something extra, so technically, she appeared four times as Mera (and I believe was paid so) with the possibility of more.

It's also safe to assume her Snyder Cut appearance warranted her an additional payment as back in October of 2020 when it was first announced Amber Heard was appearing as Mera in the "Snyder Cut," THR reported the movie is "being overseen by HBO Max, which is financing the new round of shooting and the completion of the many unfinished scenes."

So if Warner Bros. had issues with Amber Heard, why then was she brought back for Zack Snyder's Justice League on HBO Max, especially in a post-credit scene that could have easily not used her?

Something doesn't seem to add up as while Amber Heard claimed she had to fight for the Mera role in the DC movies, she appeared in the 2017 Justice League movie, received $1 million for the first Aquaman, received $2 million for Aquaman 2, and also whatever she got for returning in the "Snyder Cut" on HBO Max.

Deadline also adds that Tuesday will see Depp's team bring in Kate Moss to testify and rebut Heard's claims she heard Depp pushed Moss down some stairs back when Depp and Moss were involved during the Clinton era, which saw Depp and his lawyer "actually fist-bumped in court in inappropriate glee as if a well-laid trap had been sprung."