Eternals' Lauren Ridloff Clueless In The Flash vs Makkari Debate

Proving how the woke agenda destroys content, Eternals star Lauren Ridloff is absolutely clueless when it comes to her character Makkari and The Flash and the comics.

While talking with CB.com where the article laughably shills and says Lauren Ridloff has settled the debate and describes Makkari as a "hulking, hearing white dude," she said she thinks Makkari is faster than DC's own Scarlet Speedster, The Flash:

"Okay, so this is a conversation I had with my son," Ridloff explained. "When he first found out that I was going to be the fastest woman in the universe he said, 'No you're not.' He brought over his laptop and looked into the computer and said, 'Look! It's true! Flash is faster than Makkari.' But I'm sure Makkari...because she travels faster than the speed of sound."

If Lauren Ridloff actually did some homework and read up on her character, she would have known Makkari and The Flash actually raced in the comic books in Quasar #17 and #58, which I grew up reading, and Quasar happens to be one of my favorite characters and is the very reason this site was created when Quasar was replaced with a woke politically correct character back in 2006. 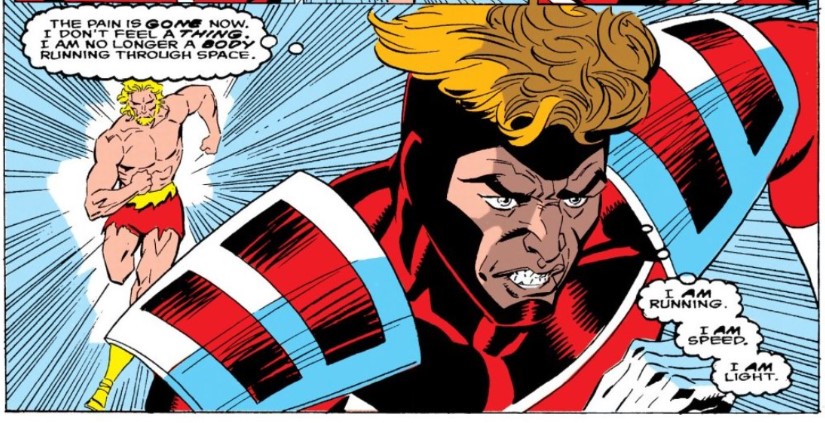 The Flash vs Makkari

Getting back to The Flash vs Makkari, you might ask, how did that happen since The Flash is DC?

Well, the late Mark Gruenwald, a Marvel Comics editor and writer, happened to be a HUGE DC fan, but Gruenwald was loyal to Marvel, so obviously, Gruenwald couldn't use The Flash, so instead, Gruenwald paid homage to The Flash and came up with the character of the "Buried Alien." Get it? It's really Barry Allen.

Quasar #17 features a cosmic race featuring all the Marvel speedsters on Earth where the Buried Alien appears in a lightning bolt and wins the race, much to Makkari's dismay. The two had a rematch in Quasar #58, but the Buried Alien, now known as Fast Forward, was forced to drop out after he stopped another contestant from sabotaging Makkari, with the race eventually ruled not to count.

So as far as canon goes, The Flash is faster and beat Makkari in a race.

Quasar #58 also sees Makkari remark about not understanding death, and that is because the Eternals do not die, do not change, do not have handicaps, as they are eternal. 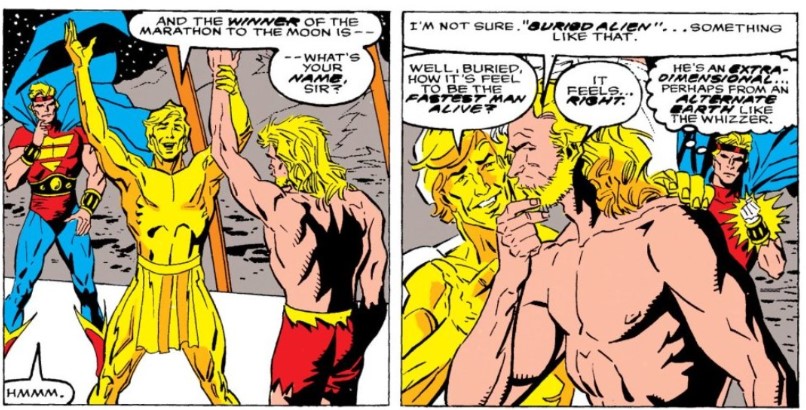 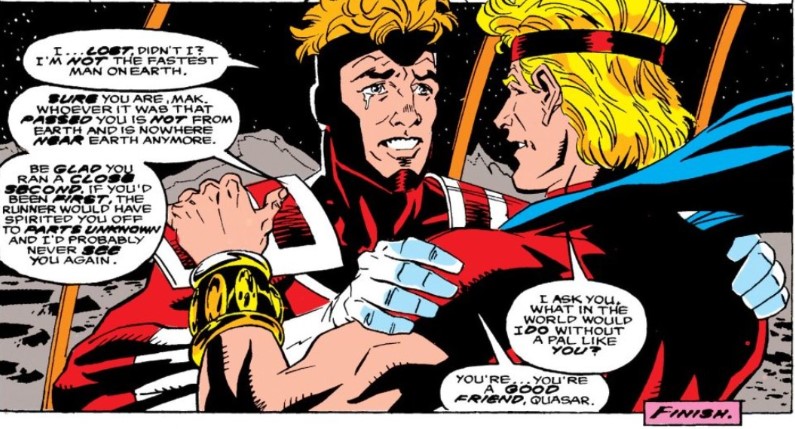 Gruenwald also features Superman references in Quasar, and Quasar is an amalgam of all his favorite characters, IMO, including DC's Superman, Green Lantern, and The Flash.

Gruenwald also wrote his own "Justice League" story with Marvel's Squadron Supreme in the '80s and following his death, his ashes were used as ink in the trade paperback.

In the MCU, Loki features Mobius M. Mobius portrayed by Owen Wilson who is made to resemble Gruenwald, as the TVA originally paid homage to Gruenwald where the TVA staff were all clones of Gruenwald.

Regarding the woke agenda destroying content, we see how the original Makkari has been replaced, with his entire story thrown out the window, so of course, why would Lauren Ridloff bother to read up on the character -- much the same how a writer for WandaVision doesn't even know who Mephisto is, as Marvel obviously doesn't care about the comic books and source material and is all about diversity.

If the PC agenda wasn't the case, why didn't Feige and Marvel Studios simply create a new character for Lauren Ridloff to play seeing how much they changed things from the original comic book version (these are comic book movies we are talking about here)?

It's also thought James Gunn might be using a woke Quasar replacement in Guardians of the Galaxy 3.

Eternals is now bombing big time at the box office, with critics and fans not liking the flick as well.

Quasar #17 Makkari vs The Flash: 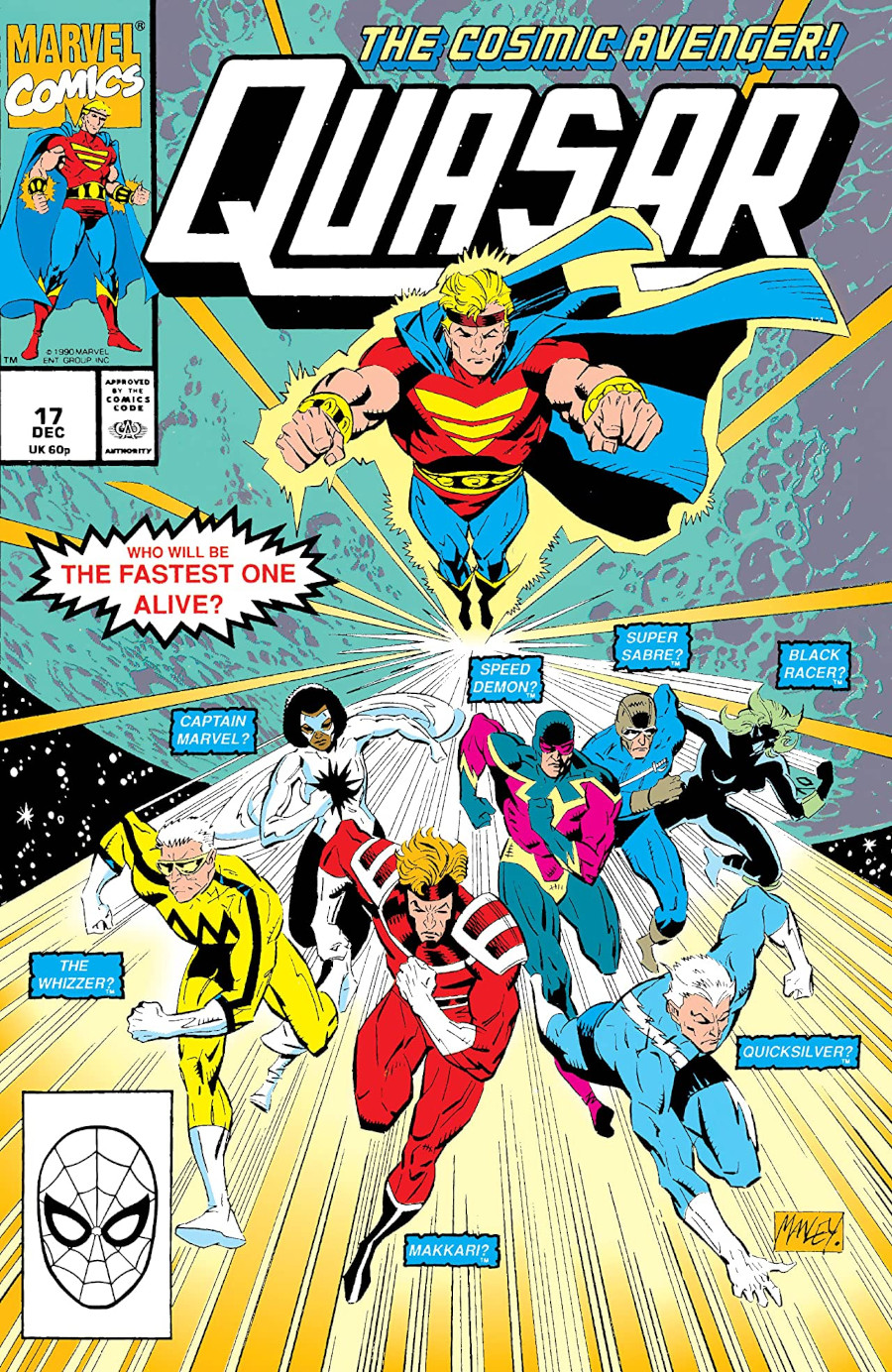