Meet your new Batwoman as The CW and Warner Bros. has cast Javicia Leslie as the new series lead, which follows the departure of Ruby Rose.

The 33-year-old actress is known for God Friended Me, The Family Business, Chef Julian, and Hello Cupid Reboot.

"For all of the little black girls dreaming to be a superhero one day... it’s possible!" posted Javicia Leslie on Instagram following the news.

Leslie will debut as the new Batwoman when the series returns for Season 2 in January where she will play a new character created for the show, Ruby Wilder.

“I am extremely proud to be the first Black actress to play the iconic role of Batwoman on television, and as a bisexual woman, I am honored to join this groundbreaking show which has been such a trailblazer for the LGBTQ+ community,” Leslie said. 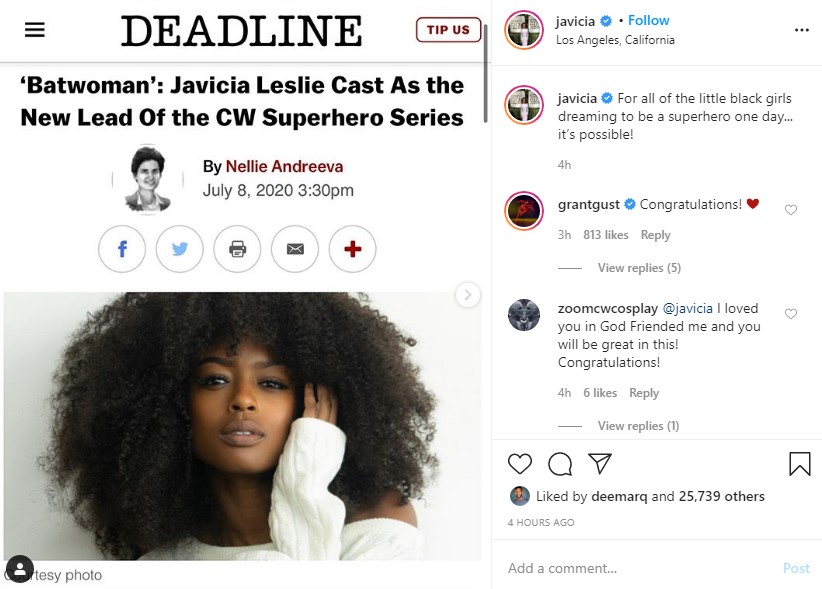 Javicia Leslie is the new Batwoman

The character of Ruby Wilder in the series is described as:

"I’m inventing a whole new character who in her past was inspired by Batwoman," showrunner Caroline Dries previously said. "So she will take on the mantle and is completely maybe not the right person at the time to be doing it, so that’s what makes it fun.”

Regarding Ruby Rose, the original Batwoman recently decided to part ways from the series over unknown reasons, though Rose cryptically posted "those who know, who."