Last year saw that rumor how Wonder Woman 1984 is going to reboot the DCEU, and now in an article from Empire Magazine, it is mentioned that Zack Snyder’s Batman vs. Superman canon might not count.

Wonder Woman 1984 sees Chris Pine return as Steve Trevor, but in Batman vs. Superman and Justice League, Diana mentions how the death of Steve Trevor caused her to isolate herself from the world of men. Only when Lex found that old image of her did Diana decide to reemerge.

Regarding the Empire Magazine article, it’s questioned if Wonder Woman 1984 will be following the continuity set up in Batman vs. Superman (note: bold my own):

Barring flashbacks, Diana’s home of Themyscira remains (presumably) closed to her. Sixty-six years since the end of World War I, her old comrades are dead and her Justice League fellows are still children. This Diana faces the world entirely isolated and alone.

Except, of course, for the biggest mystery of this film: Chris Pine is apparently back as Steve Trevor. In a shell suit. Is he a figment of her imagination? A clone or improbably similar-looking grand-nephew? Have the gods taken a hand in Diana’s life and resurrected him? If the Batman v Superman canon counts anymore (and that is a big if), then this film will end with the pair parted once more. But maybe there is some path to happiness for them. If Steve Rogers got back to Peggy Carter, who’s gonna stop Diana Prince? 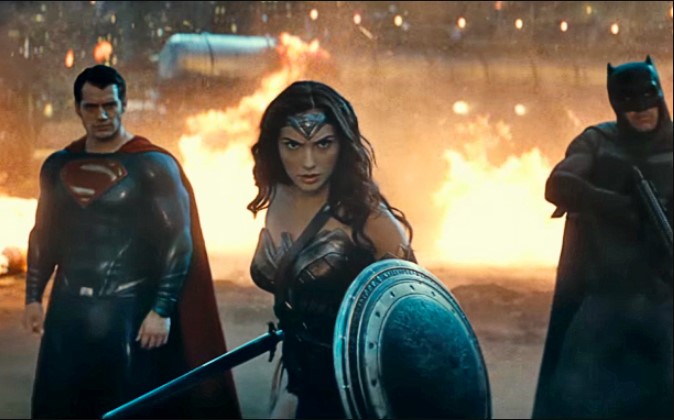 The earlier rumor about Wonder Woman 1984 rebooting the DCEU said that Warner Bros. doesn’t want to wait for a movie for The Flash and Flashpoint, so they are going to bring back Steve Trevor which will change the DCEU continuity and enable the recasting of Ben Affleck as Batman and Henry Cavill as Superman.

I was also told at Comic-Con by DC insiders that a DCEU reboot is underway involving Matt Reeves and Robert Pattinson’s The Batman, James Gunn’s The Suicide Squad and J.J. Abrams recasting with a younger Superman and taking on Green Lantern.

We can also add that Jesse Eisenberg has said he is done playing Lex Luthor, so look for Lex to eventually get recast and rebooted as well.