With it previously reported James Wan is unsure about directing the Aquaman sequel, it’s learned that now Warner Bros. is moving forward with a spinoff based on the Trench.

It is reported that Noah Gardner and Aidan Fitzgerald are writing the “horror-tinged” script focused on the Trench, the deadly amphibious creatures seen attacking Arthur Curry and Mera in Aquaman.

James Wan and Peter Safran are producing the project, which will be titled The Trench. The flick is said to have a much more modest budget than the normal DC superhero tentpole. Details include that it will be set in the kingdom of the Trench and will not feature the main cast of Aquaman.

Regarding the Aquaman sequel, it’s said there are no current serious talks among Warner Bros., director James Wan or star Jason Momoa, with everyone seemingly intent on taking a breather and their time. A previous report offered that James Wan won’t return unless the script is good enough and that Aquaman 2 is considered to be only in development mode until Wan makes a decision.

The Trench fits with DC’s new direction of going the route of smaller budget movies such as with Shazam!, Joker and Birds of Prey and moving away from big tentpole spectacles such as Superman or Justice League movies (or Aquaman 2). 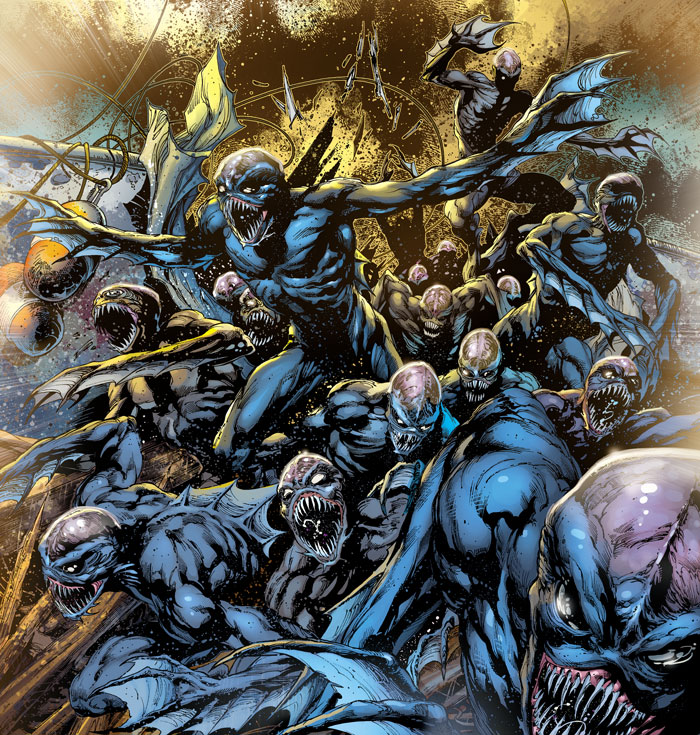 Introduced in Geoff Johns and Ivan Reis’s Aquaman #1 back in 2011, the Trench are a race of monstrous sea creatures who came from a trench in the bottom of the sea, the Marianas Trench, one of the deepest and most mysterious canyons in the ocean floor.

The Trench aren’t exactly autonomous entities. They exist as a sort of ravenous collective with every member of the species looking and acting nearly identical to the next. The sole exceptions are their king and queen, who are able to force the rest of the horde in line, at least when it comes to claiming whatever food might be in their path. But this wasn’t always the case. The real story of the Trench begins a long, long time ago back at the dawn of Atlantean civilization.

It turns out the Trench used to be normal, human-looking Atlantean citizens, back before the city sank beneath the sea. When King Atlan drowned the city, the surviving Atlanteans were split off into not two, but three independent groups: the Atlanteans we know today, the Xebelians who existed in the Bermuda Triangle, and the Trench who fell into the deepest parts of the sea. (This is slightly different from the movie, in which there were seven groups that split off.) Thanks to their isolation and extreme conditions, the Trench evolved, or perhaps devolved into a monstrous, mindless swarm set on consuming anything in their path.

But one thing you might want to understand about the Trench is that they have a good reason for this. The reality of their existence is pretty dire. The unforgiving and harsh ecosystem they live in means that they’re running out of food to support the continuation of their species. Their ravenous, brutal appetites aren’t always the product of a wanton need to destroy—they’re also looking for a way to ensure that their race doesn’t simply die out.