Massive, massive WandaVision spoilers have leaked online as footage from the next two episodes has hit social media.

Apparently, the next two episodes of WandaVision have been leaked online and it is actually claimed Disney will be taking legal action against the individual, with it also said that due to the leak, this Friday may see the two episodes released on Disney Plus instead of just the one.

Checking the various social networks, I did find the footage; however, I am enjoying the series, so I won’t spoil things. Obviously, you can do a quick search and find the WandaVision footage online if you want to.

The leaked footage probably comes at the worst time (or the best, depending on how you look at it) as this past Friday’s episode was pretty big as it bridged the real world with the reality created by Wanda, so it’s not too much to assume the next two episodes will be pretty big as well.

Judging by the first few seconds of leaked footage that I did see, the next two episodes will be that big.

YouTuber Grace Randolph confirms the leaked footage, and the word about Disney potentially taking legal action and releasing the next two episodes comes from another Twitter user (note: In the time that it took me to write this article and post it, the Twitter user deleted the tweet, so consider the tweet from the second user a rumor).

What’s with all these #WandaVision leaks?! This is a HUGE breach of security for #Marvel, maybe the worst I’ve seen?

I will not be covering them, be careful on social media, etc

OFFICIAL! Disney will take legal action against the person who leaked everything, they have already eliminated everything from social networks and the least thing that is uploaded account that they will eliminate. It is also rumored that next Friday they could premiere two episodes because it is the leaked content. 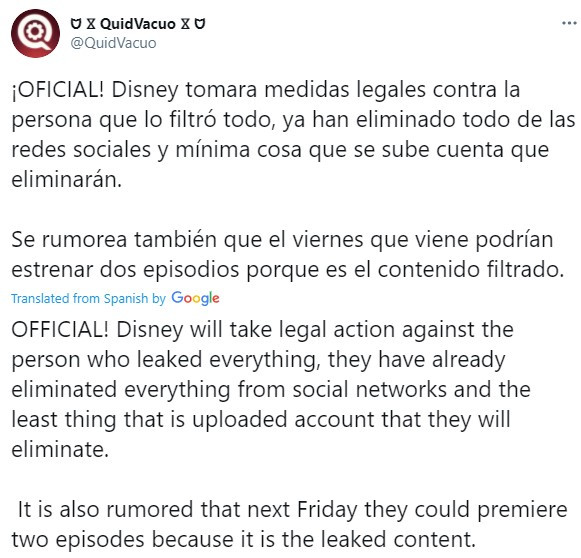