With the Jared Leto Morbius trailer dopping earlier on Monday, the footage revealed potential connections to the MCU, which is something being said that Tyrese is claiming.

Back in October saw Charlamagne from the Comic Kings on YouTube offer up that Tyrese said they have signed on for three additional movies and that everything will be a part of the MCU.

"And Tyrese actually told me, I was speaking to him a couple weeks ago, he actually told me that they're doing the Morbius movie," Charlamagne said. "They all have deals to do three other movies, and he did say to me that it would all be in the MCU. Yeah, he did say that to me."

Charlamagne was asked if he thinks Tyrese was lying or telling the truth.

"I don't think he would have any reason to lie," replied Charlamagne. "Yeah, but he did say they are doing the Morbius movie and they are going into the MCU."

Interestingly enough, Tyrese posted a screenshot from the Morbius trailer on his Instagram on Monday of the "In Association With Marvel" image, but it should be noted that isn't the Marvel Studios logo (actually Kevin Feige is in charge of all of Marvel movies, TV and comics now, so it remains to be seen if Feige will be keeping Marvel Studios as a separate brand).

The Morbius trailer happened to tease connections to Venom, the MCU Spider-Man films and the Sinister Six. 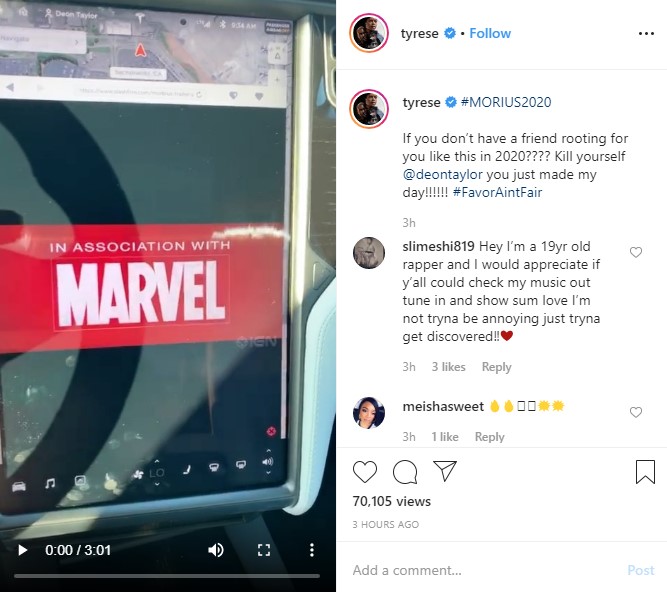 Is Morbius in the MCU?

Regarding the questioning, if what Tyrese had to say might be right or wrong, Sony actually owns the film rights to all the Spider-Man and related characters (i.e. Venom, Carnage, Morbius, etc.) and not Marvel Studios, which basically licenses the use of Spidey from Sony.

It's possible that Tyrese might be confused and simply means the overall "Marvel" universe of characters and not the "MCU," which is from Marvel Studios and Kevin Feige.

Then again, maybe Tyrese knows what he is talking about and there are plans to incorporate the Sony Spider-Man characters into the MCU.

There have been various reports from the past couple of years suggesting just that, with it even said Sony wants to connect their characters to the Avengers.

Sony and Disney just did sign a new deal to keep Spider-Man in the MCU, so maybe it also includes connecting characters such as Venom, Carnage, and Morbius into the MCU with appearances by Tom Holland in the Sony movies.

As the YouTubers note, a potential Blade crossover would be pretty cool, as Blade has been announced by Marvel as part of its Phase 5 plans; maybe Sony's Spider-Man spinoff universe will also be a part of Phase 5?