Marvel and Disney are currently rumored to be introducing a group known as the "Illuminati" into the MCU, which allegedly in the real world have ties to pedophilia and additional evil and nefarious deeds.

Rumors offer the Illuminati will appear in Doctor Strange 2 and consist of a Multiverse team of heroes made up of Professor X, Captain Carter, Balder the Brave, Monica Rambeau, and Mordo.

In the comics, the Illuminati were introduced in the pages of the New Avengers where the group consisted of Professor X, Black Bolt, Iron Man, Doctor Strange, Reed Richards, and Namor.

Marvel retconned the group as forming following the Kree-Skrull War and meeting regularly to share information that impacted the Marvel Comics universe; only Black Panther rejected the group.

Interestingly enough, Professor X and Namor art happen to resemble either Satanists Aleister Crowley and/or Anton Lavey, which some fans think was made to look like writer Brian Michael Bendis. 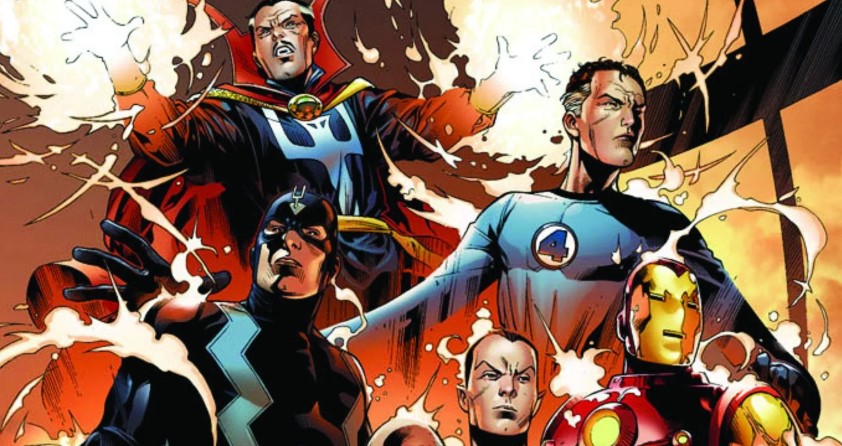 Regarding the Illuminati in the real world, it's been said they are made up of an elite group of racist white men who control the world based on the Luciferian philosophy and are the cause of most things that have gone wrong in order to form their one-world socialist New World Order (the title of the first episode of The Falcon and the Winter Soldier, with "One World, One People" the title of the last episode).

Last year saw the Out of the Shadows documentary released where a Hollywood stuntman, who is known for Batman Forever, Spider-Man, Star Trek, Terminator 3, Fast & Furious, and more, reveal pedophilia and satanism connections in Hollywood, and how the public has been manipulated by the media and CIA for decades (all said to be controlled by the Illuminati).

Allegedly, people like Jeffrey Epstein had ties to the Illuminati deep state pedophile rings along with rumors of the Clintons, with high-level Hollywood execs attached to the Illuminati as well including Harvey Weinstein.

Jared Leto, who James Gunn accused of pedophilia, now lives in the former Lookout Mountain Air Force Station, a formerly used defense site, said to be the base of operations for the CIA as they regularly told Hollywood what content to put out. Leto is known for Joker and Mr. Nobody.

Of course, James Gunn has been in the hot seat in regards to pedophilia himself as Gunn was fired and then rehired by Disney over tweets about the subject, and just this month saw James Gunn named in a lawsuit involving a 15-year-old girl who was allegedly abused and sexually assaulted at the hands of then 27-year-old James Euringer, the lead singer and songwriter of Mindless Self Indulgence, who is said to have attended James Gunn's pedophilia party.

It has also been said the Illuminati recruit famous actors, athletes, celebrities, and media figures to achieve their goals and distract and trick the public, where those actors, athletes, celebrities, and media figures sign a blood oath to achieve their success and are eventually sacrificed "by the numbers."

DC's Birds of Prey movie was also said to initially have pedophilia elements where a young teenage girl was said to have swallowed d-ck pics of the film's villain.

“The ultimate objective of the leaders of both groups is identical. They are determined to win for themselves undisputed control of the wealth, natural resources, and manpower of the entire planet. They intend to turn the world into their conception of a Luciferian totalitarian socialist state. In the process they will eliminate all Christians, Jews, and atheists. You have just learned one, but only one, of the great mysteries.”

“Right or wrong, the world is covered with agents of the Illuminati who are attempting to cause that evolutionary jump THEIR WAY, utilizing evil, non-consensual treachery and piracy. We have not been taken into their confidence.”