Henry Cavill reveals he is in training for The Witcher Season 2 and will be rooting for the Kansas City Chiefs in Super Bowl 54.

Cavill took to his Instagram account to also announce he will be taking part in The Durrell Challenge 2020 to benefit the Durrell Wildlife Conservation Trust.

"I just finished my first run in training for the Durrell Challenge which will be happening in May in Jersey," Henry Cavill said. "For those of you who don't know, the Durrell Wildlife Conservation Trust is one of my charities and they focus on making sure that animals on the endangered species list survive and thrive. So yeah, get on out there, check out the link in my bio. It's essentially a 13k run around my home island of Jersey, but get on out there, get training. The first run, I will tell you, it isn't the easiest, but it's really, really worth it, and I do feel pretty good now. So [laughs], get out there, go check it out and have fun."

Henry Cavill training for The Witcher Season 2 and The Durrell Challenge:

Double training!!! Not just for Witcher 2 but also for all the ecosystems of the world!! Disgusting isn't it..... "But what are you training for, if not just The Witcher?!" I hear you cry. Well dear friends, it's for a wee run around my home island of Jersey on the 17th of May. A 13k run called The Durrell Challenge. I will tell you what I was told the first time I did it, there are absolutely no hills -- and if you do find a hill....it's definitely the last one ----. For more info on Durrell's mission and for sign up for the run follow the link in my bio! Get on out there and go for a run! -- #Durrell #DurrellChallenge #Witcher2

Regarding Henry Cavill and the Kansas Chiefs, who are facing the San Francisco 49ers on Feb. 2, since Cavill was cast as Superman in Man of Steel, he's naturally a Chiefs fan, as Clark Kent resides in Smallville, Kansas.

"Let's Gooooooo!!!" Cavill posted prior to the Chiefs beating the Tennesse Titans. 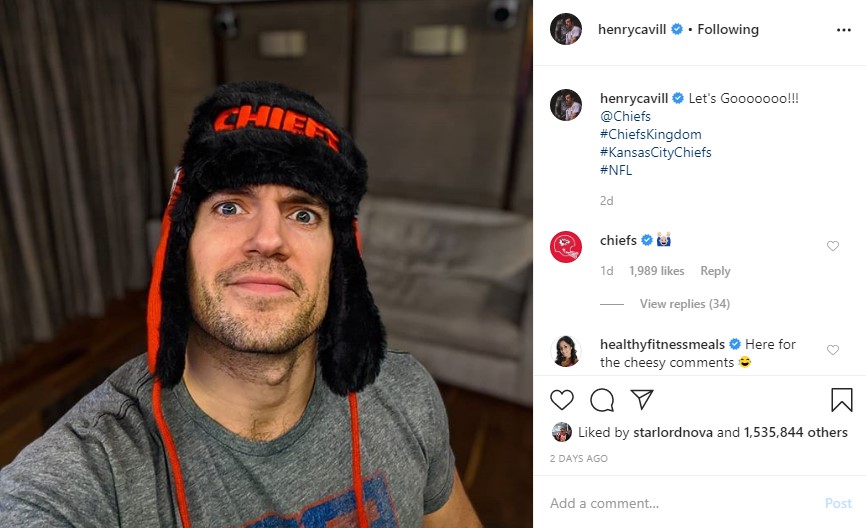