A review for Cyberfrog: Bloodhoney

Former DC Comics artist Ethan Van Sciver crowd-funded his Cyberfrog: Bloodhoney comic book to the tune of millions of dollars, and while fans paid a hefty price tag for the comic, unfortunately, it fails to deliver.

Perhaps not surprisingly, Cyberfrog: Bloodhoney comes up short in terms of story, as it comes across as pretty boring, dull and confusing -- and just when it starts to get good, it ends.

I say not surprisingly because this comic book reminds me of something put out in the early days of Image Comics when the Marvel Comics artists left and formed their own company in the 90s. While all of the Image founders were stellar artists, they weren't exactly the best writers (i.e. Todd McFarlane on Spawn; Liefeld, really, on anything). I think the same applies here to Ethan Van Sciver.

Cyberfrog: Bloodhoney read as more of an extended prelude with Bendis-style exposition and little action; there is no conflict for the first 16 pages, which is basically an entire comic book these days. The comic read to me as if it was a cliff-noted version of an extended story that we were already supposed to know about.

My warning bells started to go off when the issue kicked off things in 1996. I know Ethan Van Sciver published a Cyberfrog book years ago, so I was left wondering if this was just a rehash of the old stuff, which isn't necessarily a problem, but the problem is the entire story read like a recap of previous events, and again, when it gets to the here and now, the book is over. It's like The Walking Dead Season 6 season finale all over again or the end of The Force Awakens with the Luke teaser.

The story also wasn't as organic as it needed to be, it needed to be better fleshed out, as it seemed to be all show and no tell. It was like "here, here, here and here." For instance, Cyberfrog saves Heather from some goon (why does he have bug wings??), they become besties, and she gets a tattoo. I found that to be really odd.

What was also odd was the inclusion of Bill Clinton's speech about Monica Lewinsky, which felt completely out of place. I do get where Ethan Van Sciver is coming from (I watch his YouTube channel), but the inclusion of Clinton felt really, really forced.

The end was rather confusing, too, as Cyberfrog and Sal are fighting the wasps, then something else attacks who aren't the wasps? Is that right? We don't have any answers, as the story ends [rips hair out of head] and we're left with a huge cliff hanger.

I think I would have enjoyed the book a lot better if it skipped most of the recap and went right into the war, which I am guessing if there is a second book, where things will be headed. The story definitely needs a bit more meat and less dressing.

Regarding the art, of course, it's top-notch, so no complaints there.

Of course, the question of paying basically ten times the price for a comic book will come up, but that is something I really don't mind. I did get a super cool variant cover (see below), which also includes a blank variant on the inside with an autograph by Ethan Van Sciver. The back of the book also features a bunch of pin-ups, which honestly I would rather have had replaced by more story pages, but the art is at least really cool. I'll add paying this much for a comic book means I am going to hold these crowd-funders to a higher standard than if I paid three or four bucks. 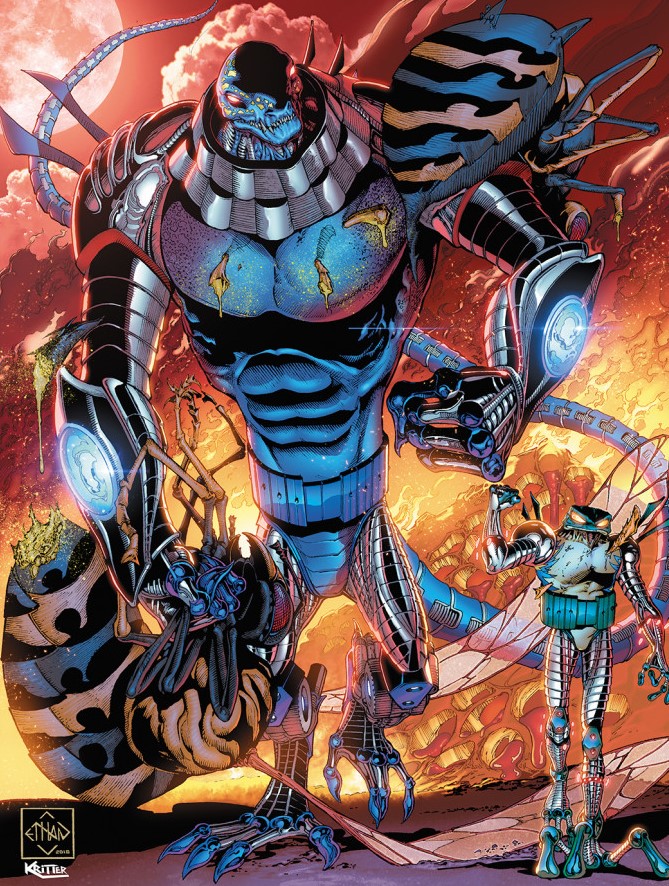