Details from a script for Colin Trevorrow's version of Star Wars: Episode IX have leaked online which includes the title said to be "Duel of the Fates."

Prior to J.J. Abrams directing Star Wars: The Rise of Skywalker, LucasFilm president Kathleen Kennedy had Colin Trevorrow, known for the Jurassic World movies, directing Episode IX, but things went sour and Trevorrow was removed from the movie.

A Redditor put together the following details, which actually do sound pretty cool.

What could have been, I suppose.

Update: The original source of the script leak is on YouTube from writer-producer-director Robert Meyer Burnett. 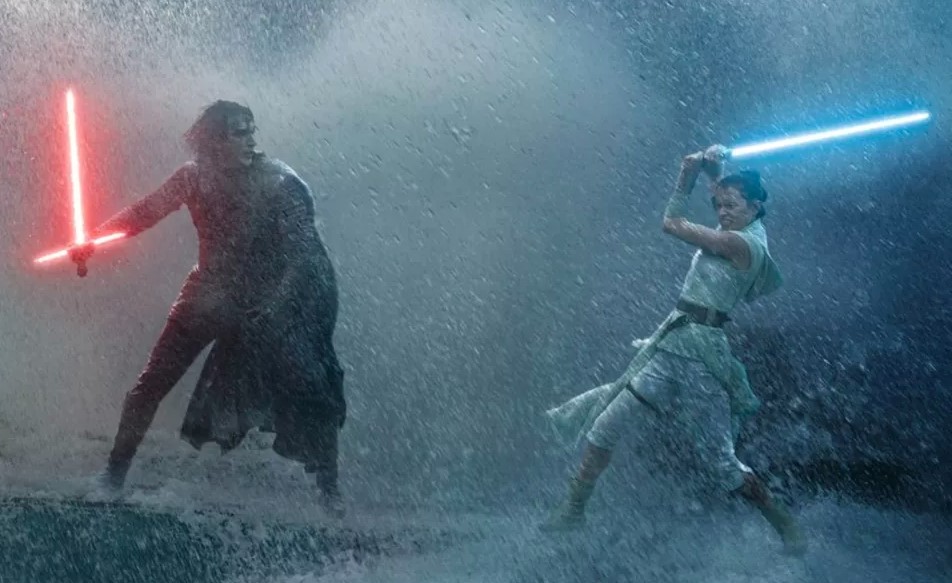 The iron grip of the FIRST ORDER has spread to the farthest reaches of the galaxy. Only a few scattered planets remain unoccupied. Traitorous acts are punishable by death.

Led by GENERAL LEIA ORGANA, the Resistance has planned a secret mission to prevent their annihilation and forge a path to freedom...

• Opens at the Kuat Shipyards (man on a mission-style)

• BB-8 and Rose Tico (allegedly a key character in script) are infiltrating Kuat Moon where First Order build their ships (workers are oppressed). There is an orbital ring and moon below it. Finn and Poe are there. No R2/3PO. Rey arrives.

• The plan: Send explosive into the power shaft that delivers raw ore into the ring.

• Rey disguised as a Tusken Raider is revealed to have created her own weapon (a double-blade lightsaber hybrid of her staff and Luke's cracked saber).

• They battle and Poe, Finn, Rose, Rey, and BB-8 STEAL A STAR DESTROYER (Eclipse-class) and escape.

• The Knife 9 a ship containing the Knights of Ren arrives a Kuat. Ataska (?) Ren kills Admiral Vaughn for his failure.

• CUT TO: CORUSCANT. No longer a vibrant city. "The new structures are built atop the art deco structure of the old republic." Occupied by the First Order now (they have a citadel/palace there). Citizens are scavengers now. Hux is now CHANCELLOR HUX and is addressing Bisc Kova (traitor who helped Resist. steal Star Destroyer.) Kova is executed with a light blade guillotine.

• Hux and Commander Selleck have a meeting with several alien war lords (ode to ANH imperial council scene). First Order has allies. They are aware of Rey being the last Jedi. Council wants to know WHERE IS KYLO REN? He is missing. Hux only knows he has gone searching for something of great power.

• CUT TO: MUSTAFAR. Kylo Ren is alone, except for a Darth Maul-esque droid. He has stubble indicating search has been for a long time. Ren is being HAUNTED by Luke's force ghost.

• Luke: "This is where the dark path leads; an empty tomb." Kylo (retort): "Where did your path lead?"

• Luke is trying to convince him to go back to Leia. Kylo: "I'm going to be more powerful than any Jedi...even you."

• In Vader's Temple, Kylo finds a Sith Holocron which reveals a hologram of Palpatine. Recording is for Vader. Palpatine has a contingency for Vader if Luke kills him. Vader is to take Luke to the Remnicore (?) System to see TOR VALUM, Master of Sith/Palpatine's Teacher.

• After scanning Kylo, the Holocron explodes and releases red lighting which burns Kylo, who screams.

• CUT TO: RESISTANCE BASE on KOR-ALAF (?). Leia is introduced as she feels what's happening to Ben. Chewbacca and Lt. Connix tell Leia that the Kuat team is back. They're shocked to see a Star Destroyer (which is landed onto the planet). Funny moment w/ Rey using Mind Trick on First Order officers who were still on the ship.

• Rey confides in Finn that she doesn't feel like she has what it takes to be a Jedi and can't live up to everyone's expectations. Finn asks her if she still senses Kylo. Rey confesses she's been having nightmares. Finn asks if it's Kylo. Rey says she can't explain their connection.

• Resistance realizes that the Star Destroyer stills has most of it's weapons (tanks, TIEs, etc). Only missing piece is an army to use it.

• Rey researching the Jedi texts from Anch-To discovers that under Coruscant Jedi Temple there is a communication system (called a FORCE BEACON) from the Old Republic that can send a signal to 50 planets. They plan on using it to get allies. First Order can't stop it, since it predates Imperial tech. Rey: "Hope is all we have left."

• Force Ghost Luke appears as Rey trains. Luke is pushing Rey to get stronger in the Force, while he is pushing Kylo to let Ben out.

• Kylo makes it back to Coruscant. Face is damaged. Mandalorian armor is smelted and is been applied to his face. Confronts Hux and belittles him, saying he doesn't need titles.

• Rey to Luke as they train: "Balance? The dark suffocates the light, light extinguishes the dark. Over and over and over again. How is that balance in the force?"

• Rey: "So says my master and his master before him. A thousand masters so eager to tell us how to live."

• Rest of exchange between Rey and Luke is basically Rey trying to back away from being a Jedi (she admits she is NO ONE) and Luke trying to convince her (he says the Force is speaking to her).

• Back to Kylo. He and Hux continue to snipe at each other. Kylo says he's leaving again, but not before telling Hux the power he discovered will make destroying planets insignificant. Kylo's last order to Hux: "Find the Resistance, wipe them out, leave the girl to me."

• TEAM B (Rey, Poe, Chewbacca): Going to a planet to find someone to help Rey figure out what she needs to do. (side: Yes, his descrp. is that vague)

• Kylo is going to a Sith Planet/Remnicore. EDIT: Before he leaves Coruscant, he takes Vader's mask and says he understands Vader now. Kylo: "You allowed love to cloud your judgement" and he throws Vader's mask off of a balcony and it shatters.

• Leia stays at the base overseeing the Resistance.

• Before Rey leaves, she and Leia have an exchange were Rey says she believes there's still good in Kylo. Leia is skeptical, but Rey believes in her Jedi Training. Leia: "You're not like my father or my brother. You're new. Whatever happens, remember the force choose you Rey. You're story isn't written by anyone else."

• TEAM A successfully infiltrates the Jedi Temple and turn on the beacon. Cut to different places around the galaxy receiving the signal (Bossk cameo). It is then cut off by the First Order. TEAM A then flee into the underbelly of Coruscant.

• TEAM B are being pursued by the Knife 9 (Knights of Ren ship) and eventually reach the planet Bonadan.

• Bonadan: Poe takes Rey to a Seer who can pull information out of memories. The Seer pulls a star chart out of Rey's mind from her visions w/ Kylo. Knights of Ren show up and fight Rey in a lightsaber battle. She defeats them and TEAM B escapes.

• Both Rey and Kylo eventually get to MORTIS.

• Leia asks Lando if he will organize the smugglers and fight the First Order.

• Rose is captured and tortured by the First Order, but is able to escape.

• Finn/R2/3PO start a citizens uprising on Coruscant around the First Order's Citadel/Palace.

• Rey and Kylo battle on Mortis, using force energy that can pull from each other. At some point is revealed Kylo killed Rey's parents at the behest of Snoke. Towards the end, Luke/Obi Wan/Yoda appear as Force Ghosts to save Ben, but are unsuccessful. Ben is "extinguished."

• RMB seems to be at the end, so just for house keeping sake - Resistance won, First Order loses.

• One final deet: Han Solo did appear in the script and does confront Kylo at some point.