In a shocker, Jamie Foxx will be back as Electro for the untitled Spider-Man 3 movie from Marvel and Sony which may suggest the creation of a live-action “Spider-Verse.

Foxx played the electrifying villain in the less than stellar Amazing Spider-Man 2 which starred Andrew Garfield, so apparently, there is going to be some kind of melding of all the Spider-Man films as J.K. Simmons is also back as J. Jonah Jameson from the Raimi movies.

How it all is going to work out remains to be seen: Will Feige reference the Garfield flicks somehow? Will Foxx’s Electro coming into the MCU be explained through the Multiverse? Possibly caused as a result of the Disney Plus WandaVision series? Or will they simply ignore the Garfield movies and just have Jamie Foxx as the MCU’s Electro? 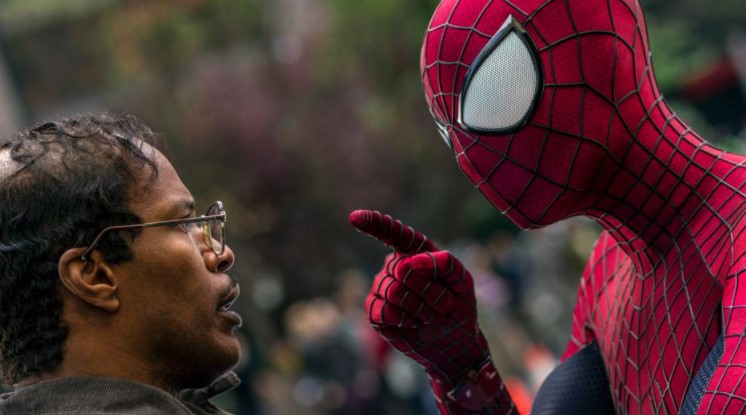 Will the Multiverse play a part in Spider-Man 3?

I’m actually surprised they are bringing Foxx back as I thought his Electro was pretty awful. Guess we’ll have to see how it all plays out, and I suppose Foxx back as Electro adds to the credibility of those rumors that Tobey Maguire may return as Spider-Man. Maybe this is all building up to Doctor Strange 2 “In The Multiverse of Madness” which ends Marvel’s Phase 4.

Worth a mention is that this follows DC announcing both Michael Keaton and Ben Affleck will be back as Batman for The Flash movie.

THR also adds most of the cast from Homecoming and Far From Home will be back including Zendaya, Marisa Tomei, Jacob Batalon, and Tony Revolori.

The Amazing Spider-Man 2 was released in 2014 and brought in around $700k worldwide; over at Rotten Tomatoes, critics gave it a 51% with audiences rating it a 65%, much lower than the first Garfield movie that has a 73% critics score and a 77% audience score.