It’s now said there will be no Green Lantern Ryan Reynolds for the Snyder Cut of the Justice League movie, which follows the news of Deadpool 3 happening at Marvel Studios.

Actually, it’s claimed the Snyder Cut won’t have a Green Lantern at all.

The info comes from YouTuber Grace Randolph who has been claiming that the Snyder Cut will feature the return of Ryan Reynolds as Green Lantern and that an announcement would be coming soon.

“To clarify re Green Lantern in Snyder Cut, there WAS a GL scene with Batman where the Batman half was already shot. There was talk of completing that scene, maybe w/ Ryan Reynolds. It didn’t pan out. So no current GL in the movie. You’re getting a TON of other cool stuff,” tweeted Randolph.

A fan remarked how there was a “Unite The Seven” poster (but there are only six members of the Justice League), which saw Randolph reply, “I told you someone else will take that place.” 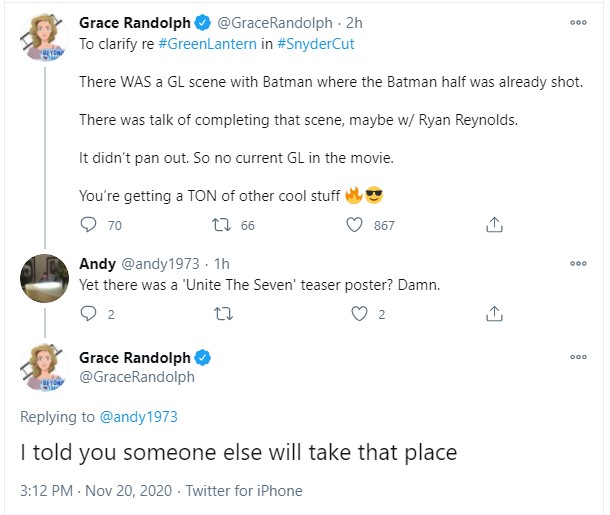 Ryan Reynolds back at Marvel with Deadpool

Grace Randolph has interviewed Zack Snyder a couple of times, so it could be possible she was given insider information about Ryan Reynolds possibly returning as Green Lantern in the Snyder Cut, so bear that in mind, but with Reynolds back as Deadpool at Marvel, it seems likely a return to Green Lantern won’t be happening.

Reynolds actually said himself he had no idea about a Deadpool 3, and character creator Rob Liefeld also backed up the claim, so perhap Feige came through for Reynolds in order to keep him from returning as Green Lantern.