Less than a month after its debut, it’s learned that Netflix has canceled Jupiter’s Legacy after only one season, with reactions from Mark Millar, Stephen S. DeKnight and the actors involved in the series pouring in on social media.

Mark Millar, creator of the comic book series who sold his MillarWorld to Netflix in 2019 – which means Jupiter’s Legacy can’t go elsewhere – confirmed the news on Twitter on Wednesday.

Millar did note in development is a villains anime and live-action series set in the same universe as Jupiter’s Legacy with Supercrooks, so perhaps some of the actors may still appear:

“I’m really proud of what the team achieved with Jupiter’s Legacy and the amazing work everyone did on that origin season. I;ve been asked a lot about what we’re planning next with this world and the answer is to see what the super-villains are getting up to. I’ve always loved crime stories from Scorsese to Tarantino and super-villains are always the most fun part of any superhero story. To do soemthing exclusively focused on villains they fight just feels incredbily fresh as we explore what it’s like to be a bad guy in a world crawling with good guys who want to put you in jail. Jupiter’s Legacy is a vast and rich space with lots of characters to mine and so I’m happy to share that our next step here is a live-action version of the Supercrooks comic I created with Leinil Francis Yu a few years back. Given where we’re going next, we’ve made the tough call of letting our incredible cast out of their show commiutment as we continue to thoughfully develop all realms of the Jupiter’s Legacy saga. We’re confident we’ll return to it later and just want to say thanks to you guys for your continued support and to the cast and crew who made this look so great.

Note: Supercrooks will appear first as an Anime series from Studio Bones later this year. @leinilyu & I have created a lot of new stuff for this show and it’s looking fantastic. It’ll be previewed at the Annecy animation festival in France later this month!”

Note: Supercrooks will appear first as an Anime series from Studio Bones later this year. @leinilyu & I have created a lot of new stuff for this show and it’s looking fantastic. It’ll be previewed at the Annecy animation festival in France later this month!

The anime show airs this year, by the way. Previewed this month at the Annecy animation festival in France in 2 weeks time! 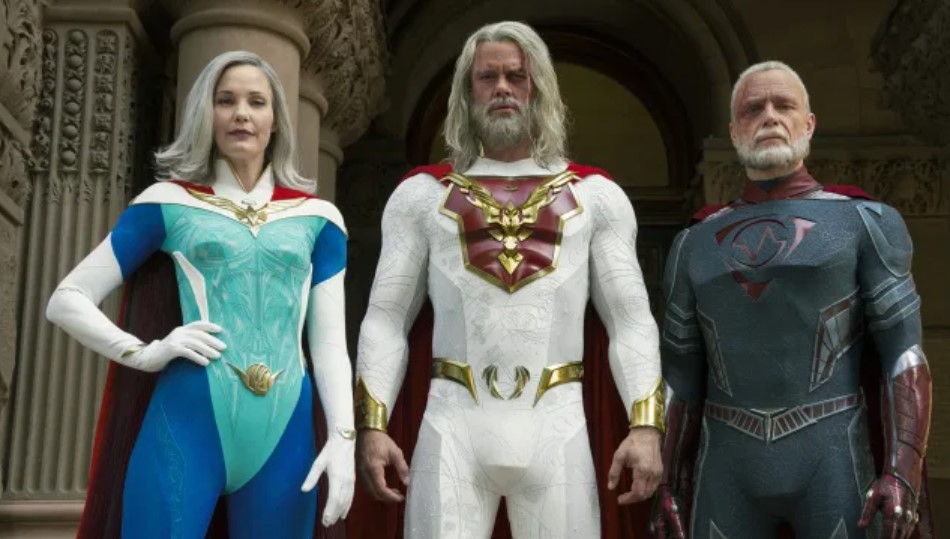 Stephen S. DeKnight, who is known for Spartacus, Marvel’s Daredevil, and more, was the first showrunner of the series but left half way through filming, so it’s guessed the behind-the-scenes problems may have led to Jupiter’s Legacy getting canceled as apparently the show did have a lot of views and wasn’t canceled because no one tuned in.

Sang Kyu Kim ended up taking over as showrunner, where we see DeKnight mentions the version of the show didn’t match DeKnight’s vision of how DeKnight wanted the series to go.

Regarding Rotten Tomatoes, the critics slammed the series with a 38% Rotten rating, and fans gave it a 72%. I thought it was okay myself, but thought The Boys and Invincible did DC’s Justice League better; Jupiter’s Legacy also had some questionable special effects, which unfortunately seemed on par with The CW DC shows (in other words, pretty bad).

Sad to see the story come to a premature end, but I wish @mrmarkmillar and @netflix the best moving forward. My deepest thanks to all the cast and crew who worked so hard on @JupiterLegacy. And to all the all fans, I am forever grateful. https://t.co/FJJXlkHPRX

The show was very expensive and insanely complicated, so I completely understand the decision. But I can tell you this now: I was planning on the end of season two to be THE BIG MURDER. https://t.co/VeZBp1kKcG

Hey, @THR. You might want to occasional check your facts. I parted ways on this show halfway through shooting the first season. How about you update this with the name of the showrunner who took over after me?

At least with this you can read the comics to see here it would have gone. Not an exact match, but it will give you some closure. https://t.co/f4CpJuvfJa

Not from me. The dual timeline was going to be in every season. Although we would jump decades so we could tell the story in Jupiter’s Circle in parallel with Jupiter’s Legacy. https://t.co/Pr3hwBj2tz

No, he wasn’t. I never had an issue with @mrmarkmillar. He was incredibly supportive and extremely generous in his praise. I’d work with him again in a second. https://t.co/B2AT0Z15eR

Not what I said. I’ll take my lumps. But @THR can’t lay all the negative reviews at the feet of the guy who parted ways midway through the season. Got to tag the person that came in after me for that one. https://t.co/rZgVajN3s5

That’s actually not how it works. I can’t get into details, but a lot of very talented people tried to make the best show under very difficult circumstances. Mark was always very supportive of my vision. https://t.co/d2GEejZkMH

Very often a show will get green lit at a specific budget but then depending on location and other factors the budget can start to grow beyond that. So it just gets more expensive than the viewership justifies. https://t.co/ErY3tGXrhF

Don’t get me wrong: I completely understand @netfli’s decision. The production was expensive, complicated, and troubled. Unfortunate, but understandable. https://t.co/e21M61dKrY

As most of you know, I parted ways with Jupiter’s Legacy halfway through shooting. But I adore the cast and crew. They gave it their all. What finally aired may not have been my vision, but for the armchair pundits saying the show was a flop, here’s my counter argument: pic.twitter.com/P7MHekKUZ3 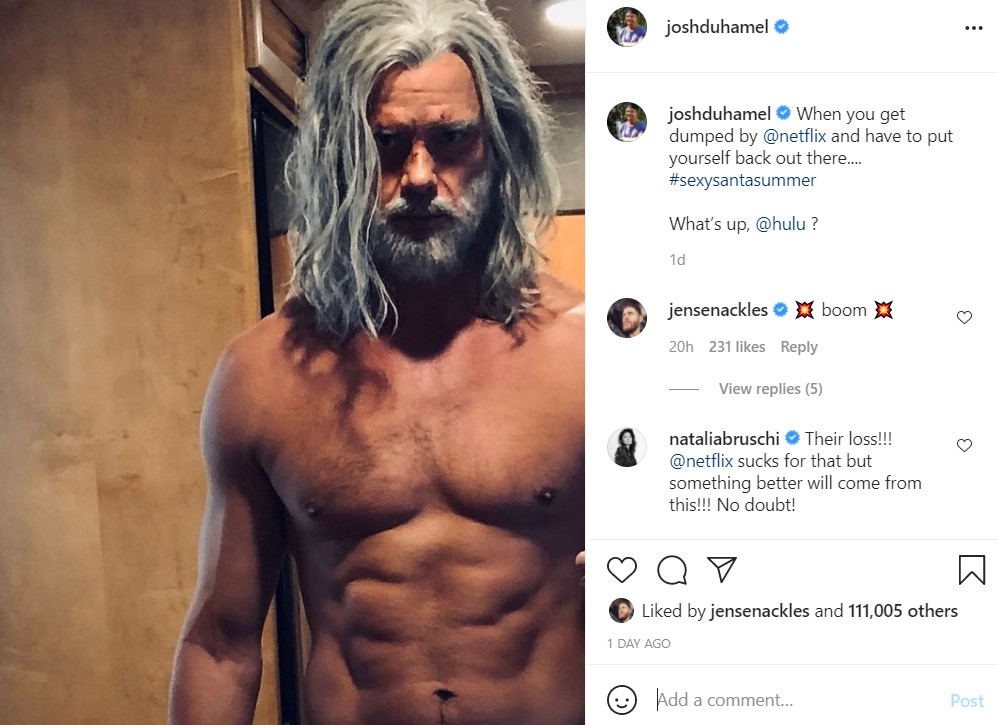 “When you get dumped by @netflix and have to put yourself back out there….” posted Josh Duhamel who played the Superman-like character Sheldon Sampson aka The Utopian. “What’s up, @hulu?”

Matt Lander, George Hutchence / Skyfox, posted, “This 1st photo seems fitting. A gang of friends who once was. Thank you to my incredible cast, crew and creatives behind #JupitersLegacy. What an experience you all made this…. It’s not every day that a kid like me gets to be a superhero.”

Mike Wade, Fitz Small aka The Flare, posted, “Worked with a Brilliant Team on #JupitersLegacy @netflix I appreciate the work that everyone put into this and am beyond grateful for the experience. Be on the lookout for everyone involved, they’re sure to have something amazing coming your way soon.”

Andrew Horton, Brandon Sampson aka The Paragon, posted, “I’m gutted. Jupiter’s Legacy was a once in a lifetime experience and one I will never forget. I’m sad and sorry that we don’t get to continue this journey. I feel as though we had barely scratched the surface with this one, but as the inimitable Jim Carey once said ‘that’s the way the cookie crumbles.’ A huge thank you to every single person involved in this titan of a project; we should be incredibly proud of what we created, regardless of the outcome. Thank you to @netflix for the opportunity. Thank you to @mrmarkmillar for creating Jupiter’s Legacy. Thank you to Steven DeKnight for taking a chance on a nobody. Thank you to everyone who has watched the show.On to the next one.” 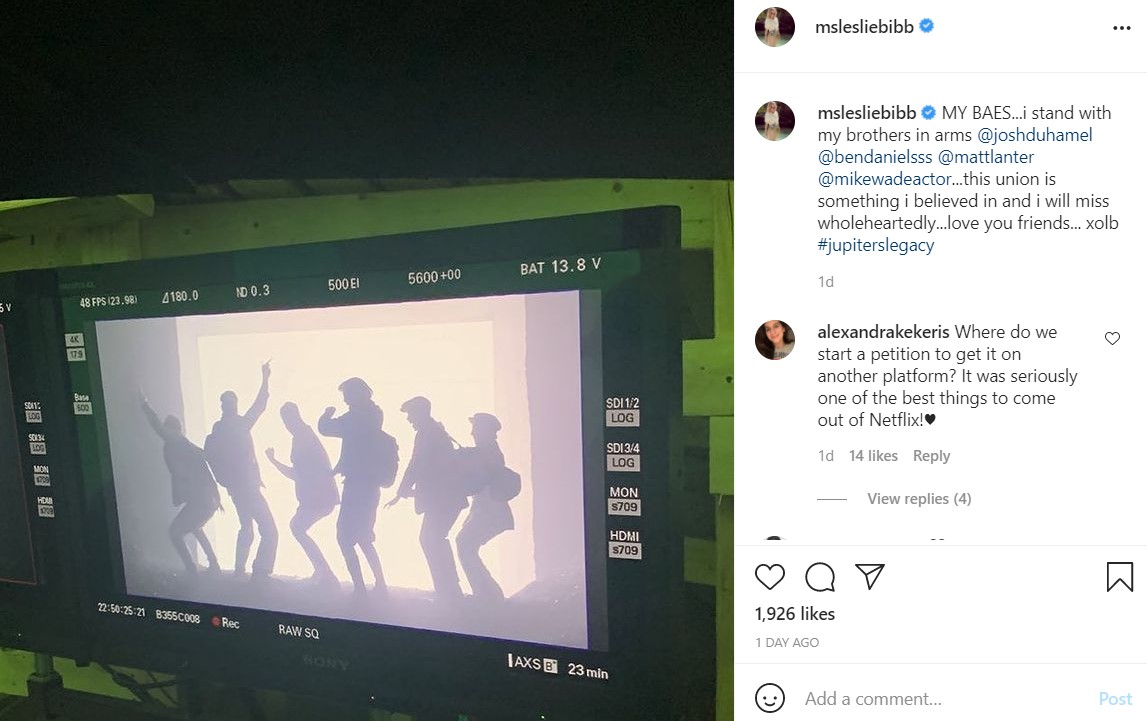 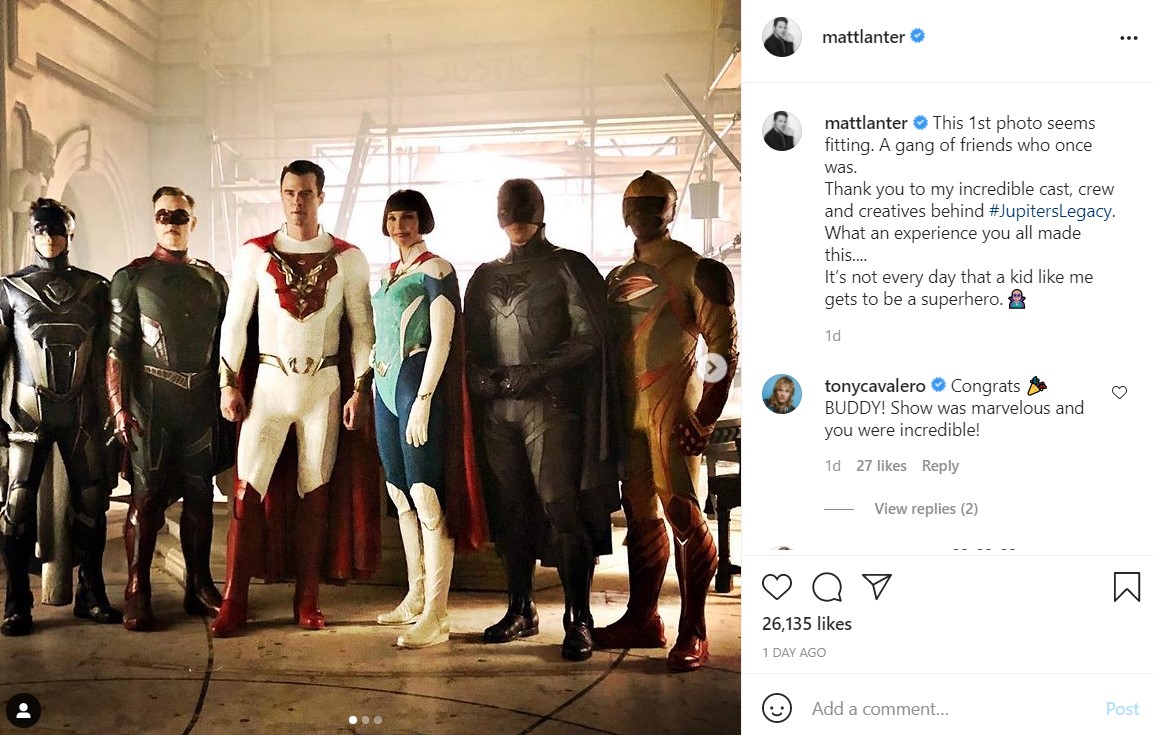 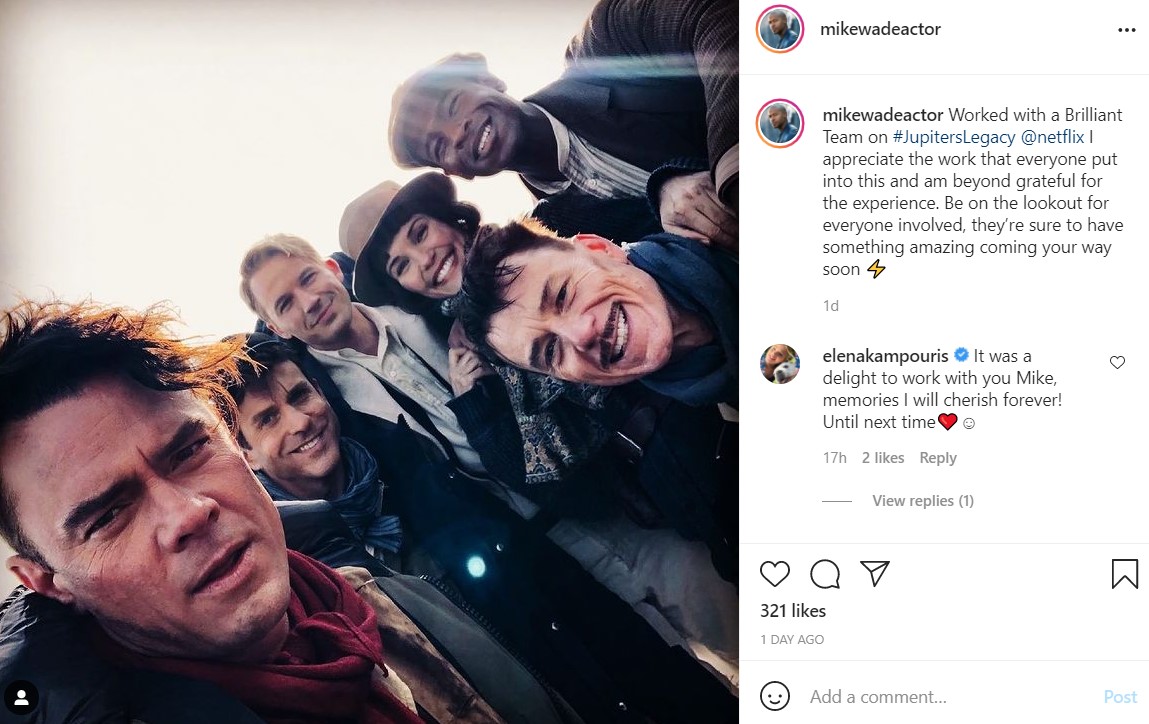 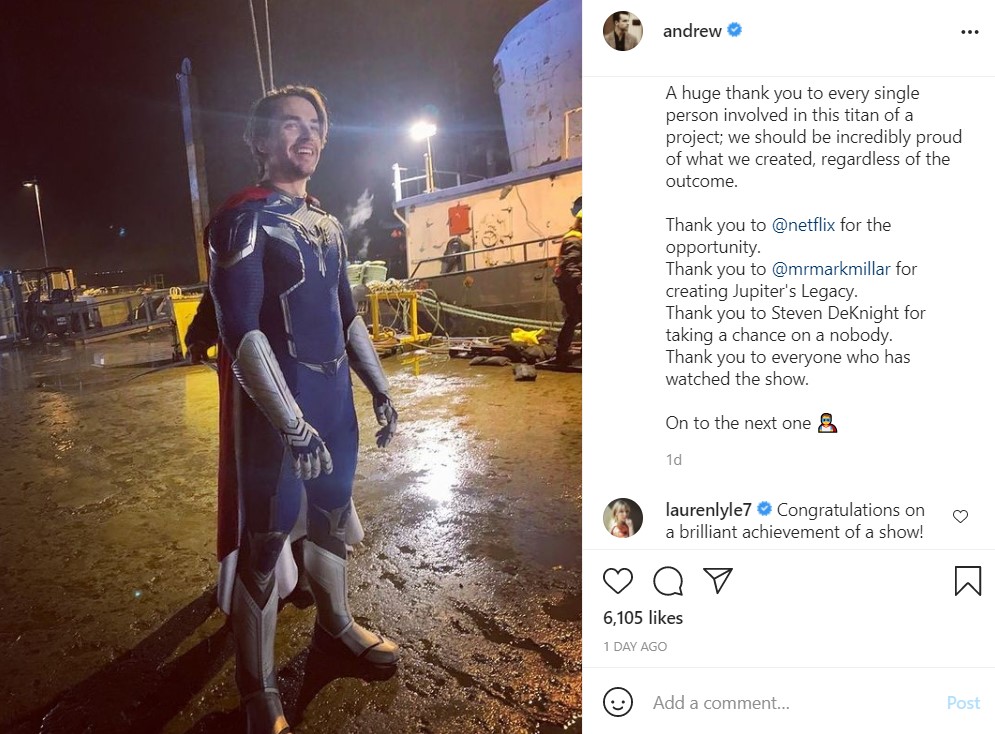