He-Man fans have overwhelmingly rejected both Kevin Smith and his woke Masters of the Universe: Revelation series on Netflix, which follows it learned the show recently disappeared from the Top 10.

While Kevin Smith and the shill media attempted to downplay the negative reaction to the series from thousands and thousands of fans on Rotten Tomatoes by excusing it as "review bombing" (the same excuses didn't work for Star Wars: The Last Jedi or Captain Marvel) the official Netflix YouTube account happens to offer confirmation that fans aren't happy at all.

Earlier today saw Netflix post a video titled "Inside the Orko vs. Scare Glow Fight in Masters of the Universe: Revelation" where the likes, dislikes, and comments haven't been turned off (unlike Smith's Fatman Beyond He-Man video from last week), where the dislikes and comments are overwhelmingly rejecting Kevin Smith and Masters of the Universe: Revelation, as presently there are 925 dislikes to 593 likes. 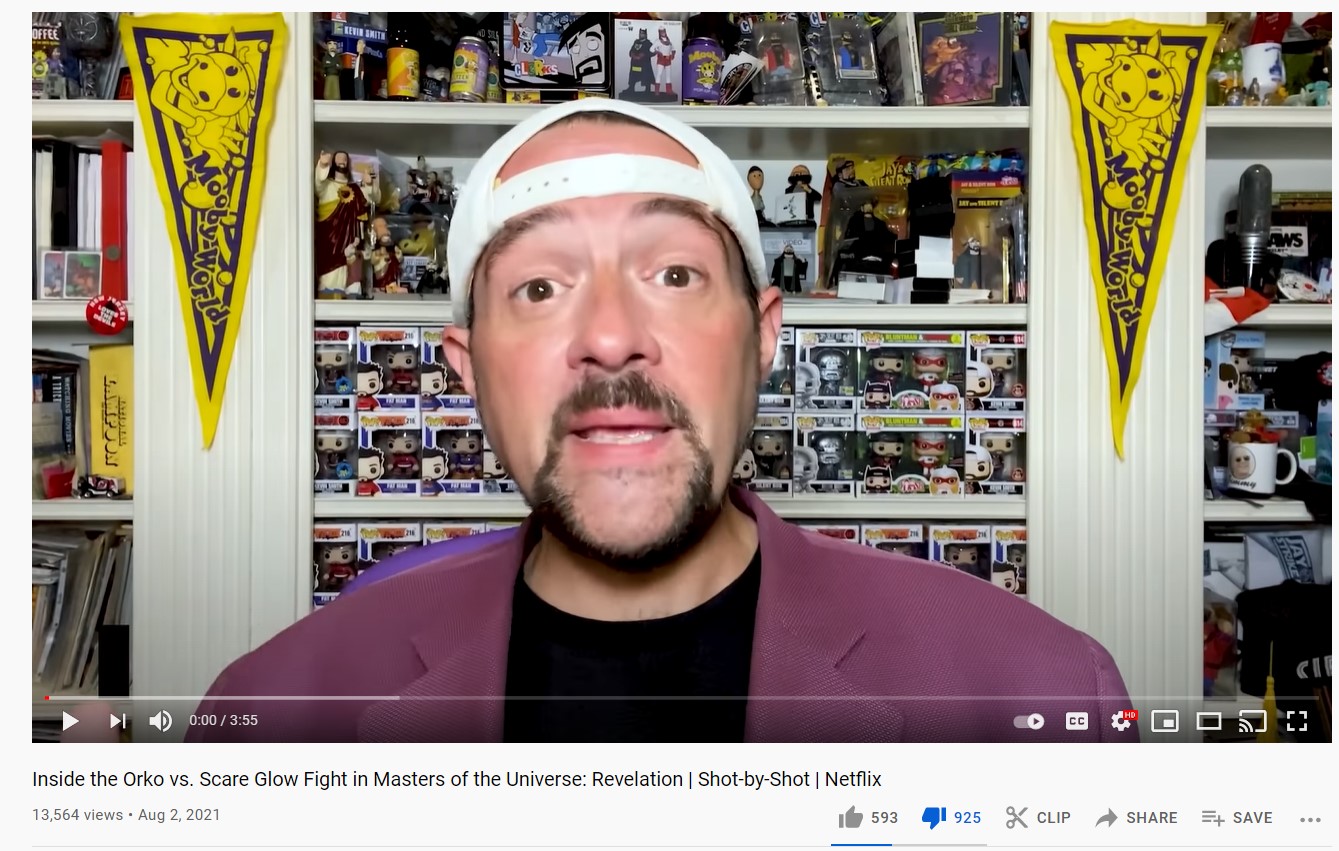 Checking a video from a week ago titled, "Masters of the Universe: Revelation ENDING EXPLAINED with Kevin Smith," shows even more fan dislike as there are 5.4k dislikes to 1.3k likes. 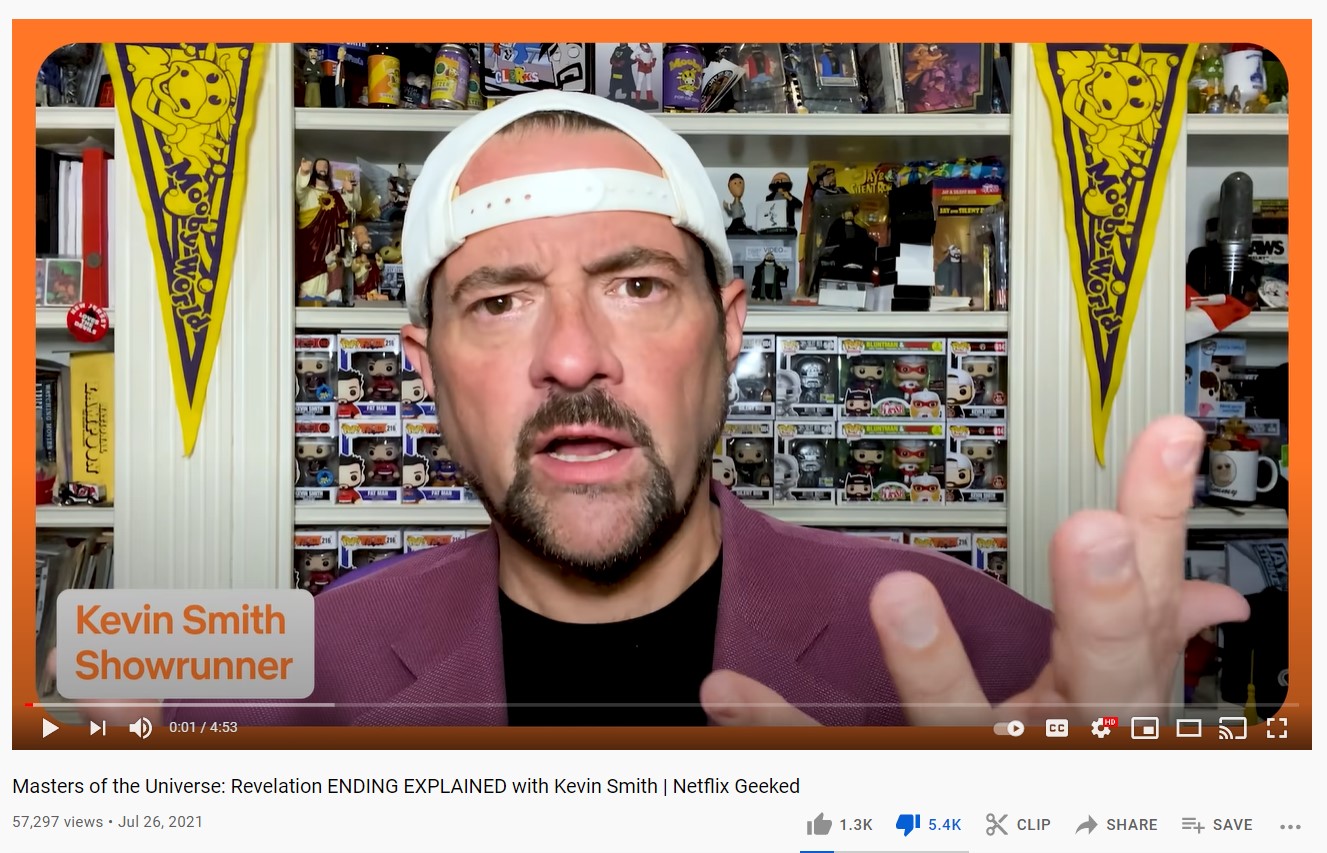 Another video, "Masters of the Universe: Revelation in 60 Seconds," also has a significantly more amount of dislikes, 1.5k, to likes, 965. 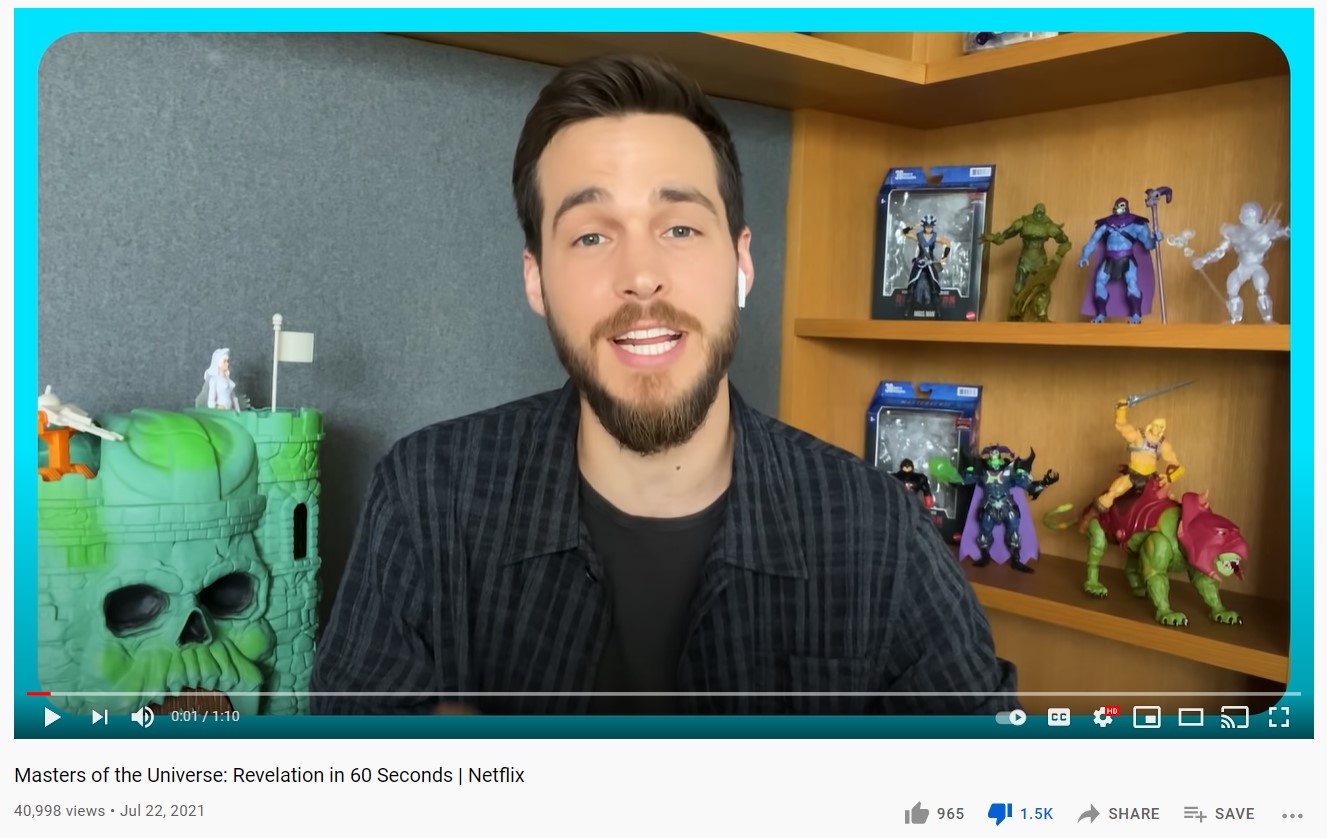 Fans not happy with Kevin Smith and his "He-Man" series

So through the Netflix YouTube channel, we have some real-world feedback about Kevin Smith and the Masters of the Universe: Revelation series (see below), where at the least, the takeaway is that a majority of fans are not happy with the series, and even if it was a 50-50 split, that would be really bad as well.

Kevin Smith has been pretty cocky about the show as he f-bombed fans and seems to be stating reactions don't matter, that Netflix only cares about the views, but what the show dropping from the Top 10 tells us is that no one is watching Masters of the Universe: Revelation anymore on Netflix. You may argue that means everybody watched it already, but many other shows have stayed in the Top 10 for weeks on end on Netflix, while Masters of the Universe: Revelation dropped out after a few days or so. As I previously pointed out, this also means the show is not being watched a repeated number of times, again, which isn't good at all.

I'll also be curious to see how well the Masters of the Universe: Revelation toy line sells for Mattel. I know for a fact that following the release of Star Wars: The Last Jedi, Star Wars merchandise tanked (as confirmed through Disney investor reports), so it will be interesting to see if the fans also reject the new Mattel line, and if that is the case, it's game over for Kevin Smith, Teddy Biaselli and Rob David.

And just in case Netflix does decide to disable the comments, dislikes, and likes on the videos, below you can check out a sample of the reactions from the Orko video released earlier today.

While true, some of the comments attack Smith directly (he's a big boy, he can take it, right kids?), it does show how much the fans care for He-Man and that they aren't happy with this Netflix series. 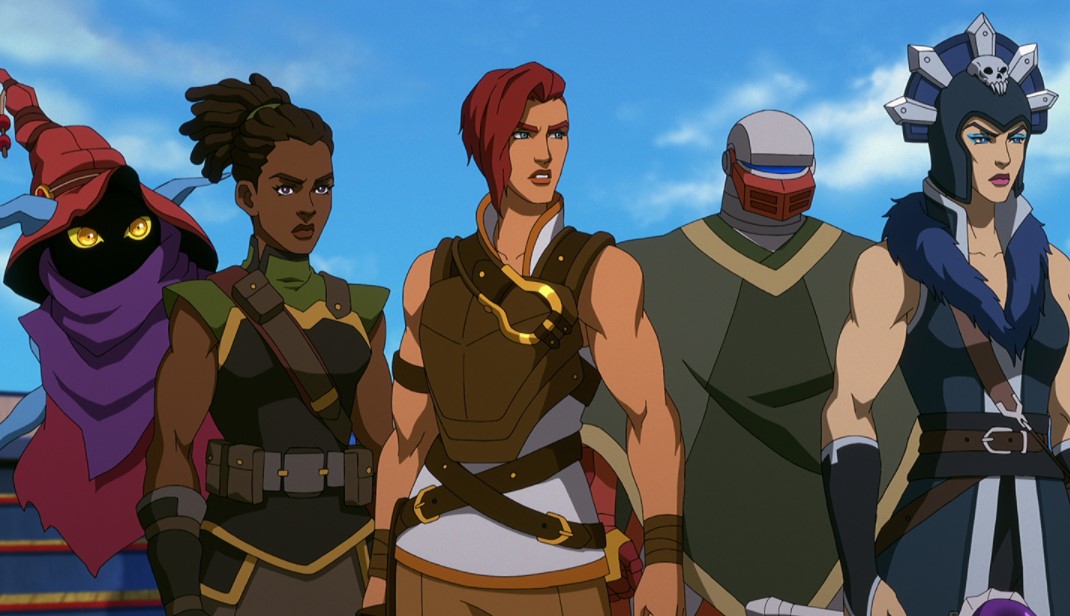 Fans react to Kevin Smith and Masters of the Universe: Revelation on the Netflix YouTube channel:

- Ah yes the moment they killed off the only actual watchable character in the series.

- It's always interesting to see Kevin transition to Karen Smith... So stunning, so brave!!!!

- This guy needs to buy clothes that fit him and remove that hat, act your age man.

- Surprise he didn't cry whilst making this

- Hopefully one day we'll actually get a new He-Man show.

- I was thinking to cancelling my netflix account after i see this crapy schow sooo ... that is all i have to say

- Look who it is. It's Mr. Killjoy himself

- Everyone who dislikes what was done,with this series,can’t possibly be an incel or neckbeard. I’m getting kinda sick of people like Kevin Smith (and corporations like Netflix) needlessly messing with established properties and then

- I loved Kevin's Marvel reactions, I can't watch his crap now. He lied, twice to be exact... Hollywood thinks their lies are facts

- "This is what happens when ideology trumps art" - Quentin Tarantino.

- Dislikes are more than the likes

- He made orko a ball of depression

- I just canceled my Netflix.

- bring back im not okay with this

- All characters we love is dead forver

- ahahahahah More down votes then upvotes... Guess he'll do another cry baby video saying it's everyone elses fault but his.

- looking at his imdb, man his movies sure bombed hard. stupid of netflix to hire him.

The new show inspires narcissistic self obsession and hate speech against all men...
It's an abomination that I would have never shown to any kids.

- Kevin Smith the massive comic fan and creator of some great films, has become Karen Smith, this is sad he's fallen and can't even see the issue.

- I would like to let you know that I cared very little for the show and your creative choices. And I care less for this video.

- After watching this series, I'm just disappointed. It's upsetting that a franchise with so much lore, history and potential, gets so much disrespect. I guess my "next hope" it's Sony live action movie that I've been waiting for over a decade now, so

- Bruh This Sucks More then rise of Jedi

- This is as bad as Dababy getting drop from his festivals, Kevin please stop making videos and just pray people watch Part 2, because sadly I don’t think people will

- I didn't grow up with he man but what I find funny is kevin told people to grow up but just look at his room behind him, the way he dress for a man in his 50s and had a hissyfit about George Lucas star wars prequel to the point where he made a episode where kevin took lucas to court for the prequel movies. Lol

- Why are you calling your audience kids? Most of fans are atlest 20/30+ we did grow up with He-Man older / newer version. Also I like how Evil Lyn is so bulky/sexy you know that if she wants to remain where she is she must be strong to defeat others without magic. Teela -_- under age rage girl. Can you fix her? Or it was already a plan just like Ashoka Tano to make her fans favourite after change?

- Where's He-Man? It's like they got some hack to make the show

- This show is a perfect storm of suckage and im only interested in trashing it , without respect we reject

- I remember when I wanted to make movies like Kevin Smith, and everything since Clerks 2 has been trash. Kevin 'cash grab' Smith.

- Have you guys noticed that on Rotten Tomatoes if you click on the name of someone who gave a 5 star review that person either has a new account or only reviewed masters of the universe and nothing else. Is he creating new accounts to raise his rating?

- how did he know how to destroy a classic

- Trying to save the series with all this bs

- How long until 5K dislikes like the other vid? Kev, glutton for punishment.

- Andra has the power! Right Shilletor?

- pass.... won't be watching part 2.... the show had good animation but everything else was horrifically bad.

- It's Mr Sellout himself

- For everyone that is wondering about the hate: it was leaked on Twitter that the plot would switch he-man as the main character for the female - a couple months ago, this guy said "no that's not what's gonna happen he-man is the focus the whole time" so people are angry that he lied. Rightfully so in my opinion I don't care that much about he-man though so.. just for anyone curious.

- They should not have oversold the series through a bogus trailer, specially edited to match the soundtrack of catchy music.

- At this point we dont need to hear anything from you sir accept an apology for that bait and switch crap you pulled with this series...if you wanted to do a Teela series you should have just been honest and maybe people would have accepted that but now you have lost the fans respect..great job.

- Thanks but no thanks. I have no time for woke activist directors ruining classics

- "How does it feel to have lived long enough to have seen all of your favorite franchises go down in flames" - Red Letter Media.

- Killing off classic MOTU characters fan loved just because you did not like them is just wrong especially when you said this was a love letter to fans and promised to be faithful to the original series! Very upsetting!

- Thanks for destroying the show. I wish that you don’t ruin more franchises.

- NETFLIX, instead doing stupid stuffs like this, cancel the this abomination of a show season 2 & use that very budget to make a full on Anime Adaptation (or remake) of manga CLAYMORE, maybe even a live action version show. Actual FAITHFUL adaptation of course! The actual series is actually full of female demi goddesses characters & definitely can garner adult audiences both male & females with the right/faithful story adaptation.

- We can only hope that they fix the show on season 2..

- Show was such a disappointment. Maybe season 2 will be better.