A Review Of Guardians of the Galaxy #6

I bought Issue #1 of The Man Called Nova in a small family-owned drug store in my little home town way back in 1976. I found it on the old wire spinner rack where they displayed comic books for sale and was immediately drawn to the iconic cover art. Marv Wolfman’s writing and vision for the Richard Rider Nova character and the incredible artistic talent of John and Sal Buscema kept me anticipating each new issue of the all too short first Volume of stories. Forty-four years later, I’m still an ardent Nova fan and expect to be for the remainder of my life.

I consider the entire run of The Man Called Nova to be Rich Rider’s origin story. It’s really where we see Rich acquire his powers and grow into a superhero, culminating in his first journey into space where he formally joins Xandar’s Special Forces military unit, the Nova Corps, and fights in the Second Xandar-Skrull War. We know little about these years except for a few references Rich has made to fighting in the war and to a reference to a battle on Epyrus 7 which culminated in Rich having to euthanize some soldiers causing him to develop PTSD which the Xandarians apparently treated by inducing amnesia for the incident. After Volume I concluded, Marvel didn’t seem to know what to do with the character, so they de-powered him and he disappeared until The New Warriors debuted many years later. Nova was the stand-out character in The New Warriors series and a great deal of character development and Nova mythos was created during that time including the second resurrection of Xandar in The Starlost Saga. Two more rather short-lived Nova solo series were spun off during The New Warriors run that further developed the character and mythos. Then, once again, Marvel seemed to lose interest in the character and he virtually disappeared until the debut of Giffen’s legendary Annihilation mini-series, an extraordinary military science-fantasy epic which ushered in what most Nova fans consider the Golden Age of the Nova character and mythos. Annihilation was followed by Abnett and Lanning’s critically acclaimed Nova series, thought by most ardent Nova fans to be the best Nova series to date. Marvel unwisely canceled this series for all the wrong reasons (apparently a cynical attempt to cash in on the Guardians of the Galaxy movie’s popularity) and what followed were hack-jobs perpetrated against the Nova character and mythos by Loeb, Bendis, Duggan, and Loveness & Perez which accomplished what Annihilus himself was unable to do as they utterly annihilated all the best concepts from the Giffen/DnA era. Most egregious of all was Loeb’s PC replacement character for Rich Rider, Sam Alexander – an embarrassing disgrace to the Nova mythos that just needs to go away forever. Then, a couple of years ago, we began to see a glimmer of hope for a Cosmic renaissance with Cates’ work with Nova and Guardians of the Galaxy where it was openly acknowledged that the goal was to re-capture the spirit of Giffen/DnA’s Golden Age of Cosmic. Some good work was produced that went a long way toward mending the fences with Cosmic fans – most especially including virtually ignoring the deplorable Sam Alexander character. This brings us to the present and Ewing’s tenure.

I was anxiously awaiting this issue to see what Ewing would do with Rich Rider. Would he treat the character with respect and try to un-do the damage done to the character since the end of the DnA years? The tentative answer is – yes. Not all I was hoping for, but a respectable start.

As I’ve said many times, writers subsequent to DnA have made many poor choices, portraying Rich as too traumatized and broken by events he has faced during his many years as a professional soldier. Cates began the rehabilitation process, but still wrote Rich as too broken. Ewing decided to begin the rehabilitation process by portraying Rich within a psychotherapy session and through flashback sequences we are reminded that he has many times been the one man that has made the difference between life and death for multitudes of the local group of galaxy’s residents. His internal motivations are explored via flashbacks to childhood memories. Finally, his guilt over the death of Peter Quill is explored. We end up being reminded of Rich’s great accomplishments and why he should be respected. As a side-story, this process begins Gamora’s rehabilitation as she, too, has been portrayed as too broken.

Did it work? Yes, I think so – more so for Rich than for Gamora. I did think that Rich’s father was portrayed as too harsh and punishing since in the past he has always been portrayed as kind and loving. Also, as referenced above, the Annihilation War was hardly Rich’s first exposure to brutal combat – so his conversation with Gamora is not totally true to continuity. I know a comic book has limited page time to tell a story and Ewing needed to make his points efficiently, so I can overlook these inconsistencies. I’m just hoping that broken Rich is behind us now and we get back to professional soldier Rich with some haste.

I’m hoping that we also get back to sociopathic Gamora in short order. She is also being portrayed as too broken – like she’s never before lost anyone she loved. She’s been involved with half of Marvel’s phone book over the years – including Hercules if I remember right. And how many times has she lost Adam Warlock? This angry-depressed Gamora just seems out of character to me. Heroes are able to rise above their personal problems and act for the greater good. That’s why we admire them. It’s one of the important parts of being a hero. Chronically morose heroes are just not fun. Rich and Gamora kicking bad guy ass – now that’s fun to watch.

There was some minor character development for some of the other characters with the Phyla-Moondragon developments referenced for future issues and a rather ridiculous PC moment for Hercules and Marvel Boy. Now – before the Facebook and Twitter PC enforcer trolls collectively lose what passes for their minds, let me clarify. I realize the ancient Greeks and Romans had in many ways much more enlightened views on the expression of sexuality than most of modern Western Civilization, and I realize that Western Civilization is moving toward more enlightenment in terms of sexuality and its myriad methods of expression. Though Hercules has never been portrayed as bi-sexual in the past, I’m open to the possibility that he has always been bi-sexual but that no story has ever explored that part of his sexuality. I have positively portrayed characters of all sexual orientations in all of my writings, so I have no problem with this development per se. I have a problem with the way it was portrayed. While I am not a combat veteran myself, I work with combat veterans every day and not one of them in the midst of combat would stop to make out with anyone. Sex is not on your mind during combat. You’re too busy trying to stay alive. The reveal of Herc and Marvel Boy as an item while bullets were still flying around them is just dumb and is easy fodder for criticism of shoehorning a PC moment into the story where it doesn’t belong. That reveal should have taken place during a celebration after combat. It would have been more realistic and made criticism more difficult for even the harshest critics. In other words, my problem is with the method of the reveal, not the reveal itself.

Turning to art, I liked Albuquerque’s cover in concept and execution. I have a problem with only one detail in that the uniforms of the Corpsmen, including what is supposed to be a down and out Rich, more closely resemble the costume of “Nova in Name Only” Sam Alexander and the so-called “Black Nova” gang of criminals, than the uniforms of true Nova Corpsmen. Takara’s interior art was quite well done and Blee’s colors were perfect as usual.

Sorry to the action junkies, but this was more a rehabilitation story than an action story, so it was heavy on drama and light on adventure. This arc transition issue hopefully puts the rehabilitation of Nova and Gamora behind them and lets them get back to the business of being effective leaders in the ongoing mission of saving the local group of galaxies from all sorts of doom. Looks like next issue will focus on how the Guardians of the Galaxy respond to the events of Empyre. I’ll definitely be buying this book to see what happens. I urge you to buy this book, too.

Guardians of the Galaxy #6 preview: 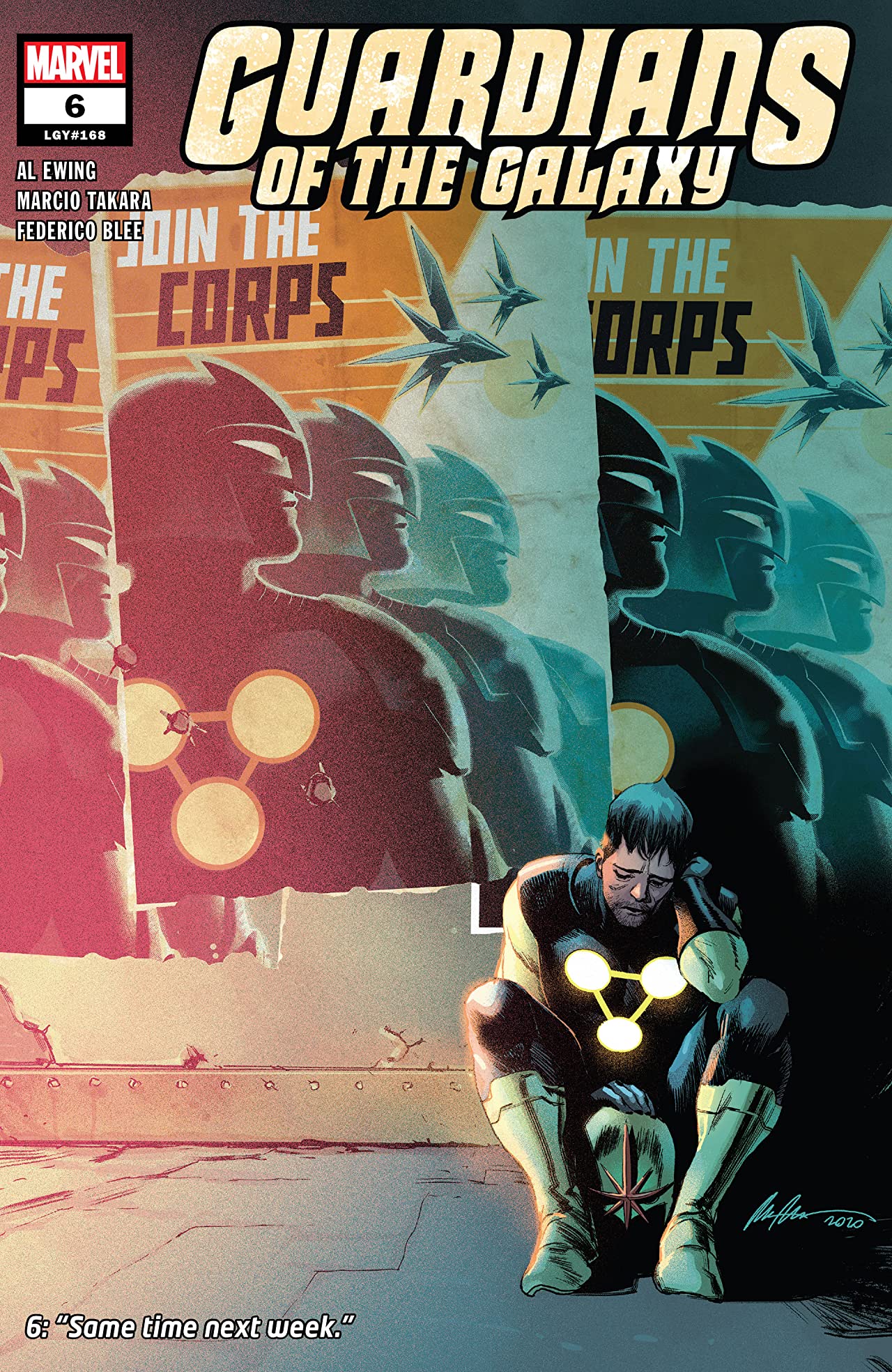 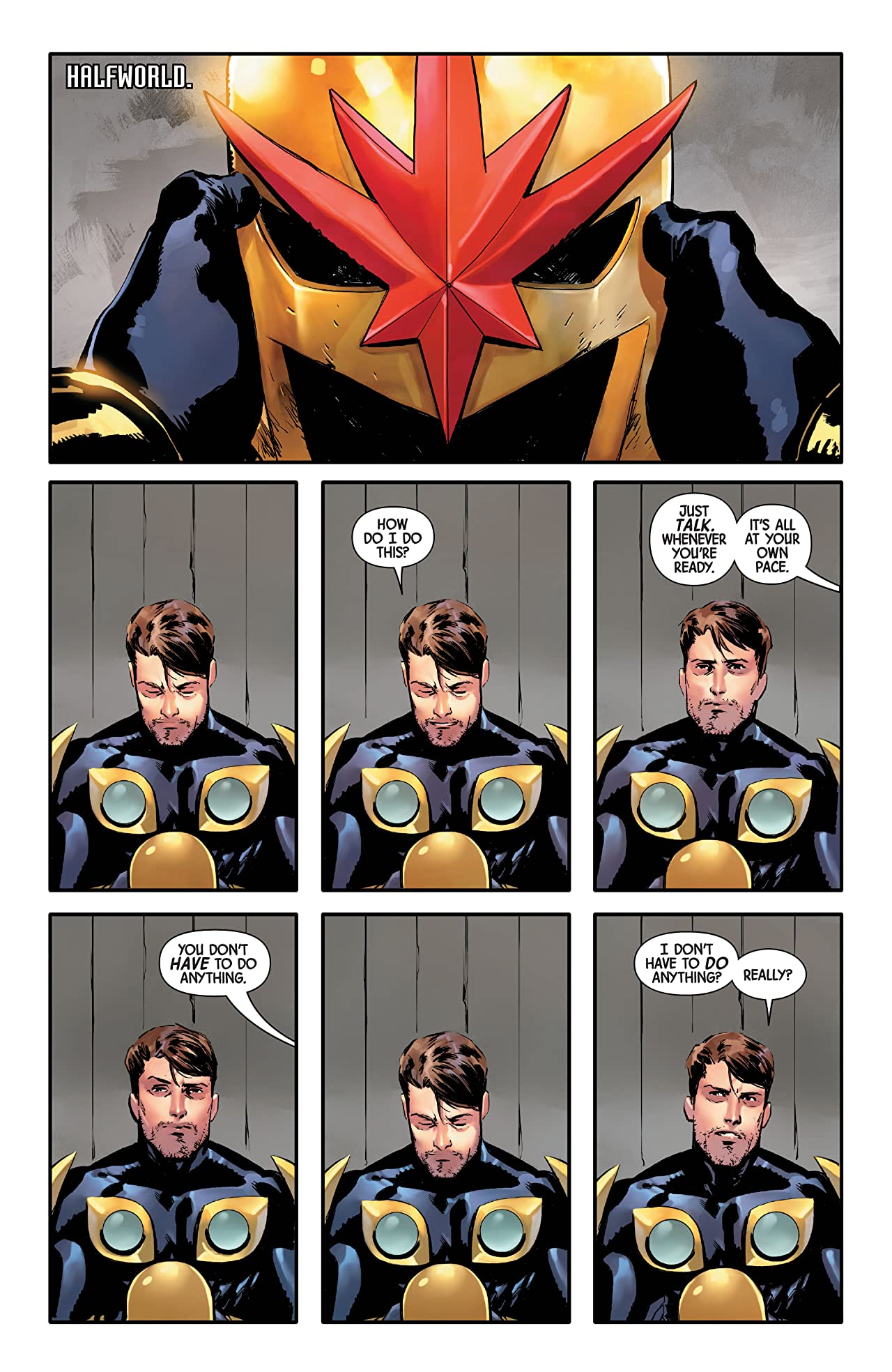 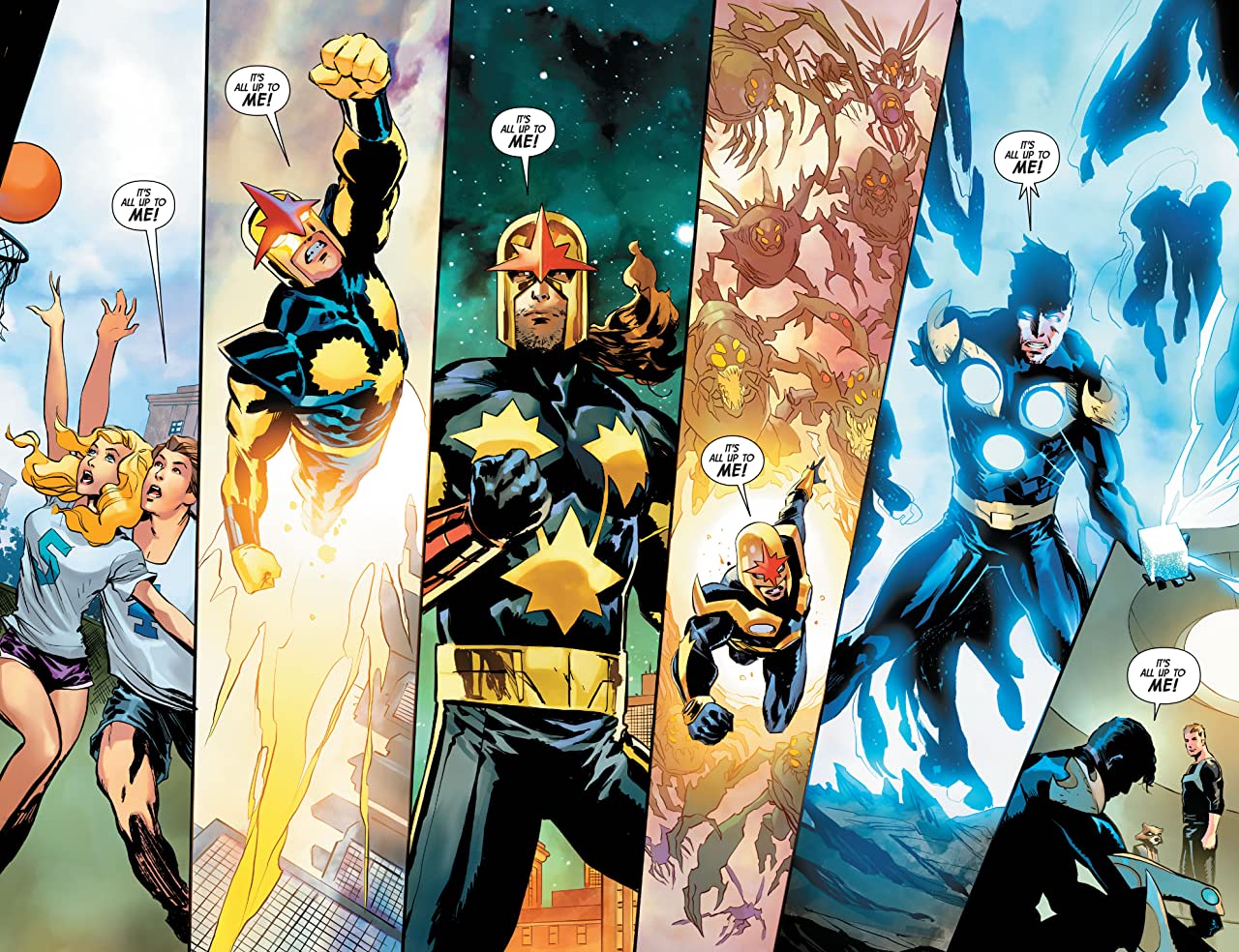 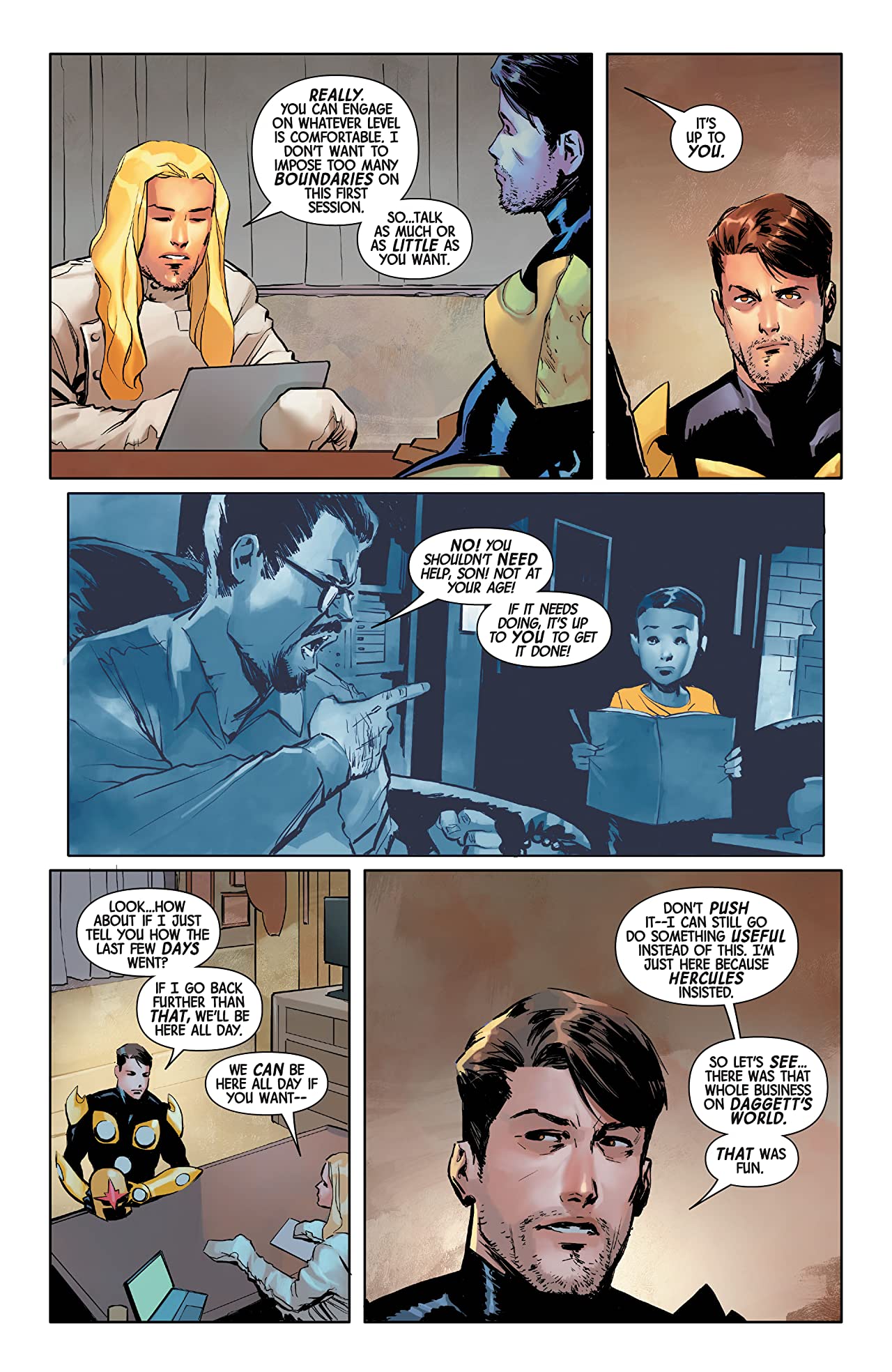