A Review of Guardians of the Galaxy #15

I personally believe the original Annihilation mini-series was the single greatest Military Science-Fantasy story Marvel has ever produced. It was fast-paced, starred all the right characters, hit all the right notes that should be included in such a story, kept readers on the edge of their seats with intriguing twists and exciting action, and breathed new life into Marvel Cosmic characters and concepts that had lain fallow for far too long. Giffen, Abnett, and Lanning had an understanding of the Marvel Cosmic characters and concepts that had not been seen before the Annihilation event and has not been seen since their respective departures from Marvel Cosmic. Giffen, Abnett, and Lanning achieved the storytelling potential of the Marvel Cosmic characters and concepts that the fans always knew existed and always craved to actually appear on the printed page. They transcended the generic superhero formulae by injecting modern and classic Military Science-Fiction/Science-Fantasy elements into the storytelling process. The result was genius and all of the Cosmic characters involved – especially Nova and the Guardians of the Galaxy crew – reached new heights in Marvel Cosmic mythos. The Marvel Cosmic fans were ecstatic and energized, sales were respectable, and we hoped it would last for a good long time. Alas, our hopes were dashed.

Inevitably, there was a backlash. The Guardians of the Galaxy movie couldn’t resist the tired old trope that if the story takes place in space, the characters and concepts have to be campy/goofy and played for cheap laughs. I can’t argue with the success of the ticket sales for the movie, but I think it would probably have done just as well if not better at the box office had they played it straight and stuck much closer to the source material. I would argue that avoiding camp, sticking close to the source material, and playing it straight was responsible for the initial success of the MCU at the box office with the Iron Man movie and the initial set of movies that followed. Of course, the tides of generic superhero storytelling and the success of the goofy Guardians of the Galaxy movie along with the failure of Marvel Editorial leadership at the time to understand what truly makes Marvel Cosmic great led to a great decline in Marvel Cosmic storytelling after the departure of DnA. Richard Rider Nova was replaced by a truly annoying generic PC tween character, GotG degenerated into goofy rom-com trash played for cheap laughs, and writers with no interest in or skill at writing Cosmic got busy applying standard superhero tropes to Cosmic, effectively destroying all that Giffen, Abnett, and Lanning had wrought. Luckily, however, some writers remembered what made Cosmic great during the Giffen and DnA years – which brings us to the present.

Marvel has tried to emulate Annihilation without DnA’s involvement and mostly failed. Cates’ most recent attempt – though worthy and a good faith effort – was largely disappointing. Now, Ewing is taking a swing at it with issue #15 of Guardians of the Galaxy kicking off The Last Annihilation event.

I think Ewing remembers what made Cosmic great under DnA, but is probably in the difficult position of having to thread the needle between what he knows made Cosmic great and pressure to make the comics more like the MCU. The powers that be still haven’t learned that the comic books should drive the MCU, not vice-versa. That is, the source material from the comic books should inspire the movies – and the movies would do well to stick as close to the source material as possible. You’d think the Game of Thrones lesson would still be fresh. GoT was great when it followed Martin’s source material fairly closely, but became mediocre at best at the end when the source material ran out and the adaptors had to improvise. The standard tropes were trotted out and the rest is infamy.

If issue #15 of Guardians of the Galaxy is any indicator, I have high hopes that The Last Annihilation will be a worthy addition to the brand. I will say that Dormammu as the big bad is an inspired choice.

There was an adequate balance of action and character development in this issue. I especially enjoyed the interaction between Rich and Peter as well as classic hot-headed Rich in an action sequence with Magneto followed by Rich coming back to his more recently evolved mature level-headed characterization. I only regret that Rich and Magneto didn’t have a more prolonged fight sequence as it could have been epic. Rich’s mastery of the Nova powers has been well-portrayed under Ewing, and I hope we get to see additional maturation with this new Annihilation-brand event. Also, I am truly digging Star-Lord’s more mature characterization and the incorporation of the mystical elements to his skill set as a nod to Englehart’s original concepts. Keep writing Star-Lord this way Mr. Ewing – it may well become my favorite iteration!

I hope that we get to see more character development with Drax. I like it that he appears to have his classic powers back, but I really want to see him in action. He should be a powerhouse on the team and it's time we see that manifested. Also, let’s see Quasar get some much-needed page time. And by Quasar, I mean Wendell, not whatshername. She just needs to go back to limbo and stay there. I’m just not a fan of these PC replacement characters. The originals were great for a reason. You want characters with certain gender/race demographics? Great. Create new ones. Leave the classic characters the way they were originally created. It’s the only respectful thing to do for their fanbase.

Friegeri’s art is awesome! He has a real talent for Cosmic art and I hope he stays on this book for a good long time. Blee’s colors continue to be exceptional and he, too, needs to be a permanent resident in Cosmic books. I’ve truly been enjoying the Booth/Corona/Guru-eFX cover art these past few issues as a good way to introduce us to the expanded team. I’m looking forward to seeing more of their work.

Buy this book and support this new Annihilation-brand event. Let’s show Marvel they’re finally moving in the right direction with Cosmic by voting with our dollars.

Guardians of the Galaxy #15 preview: 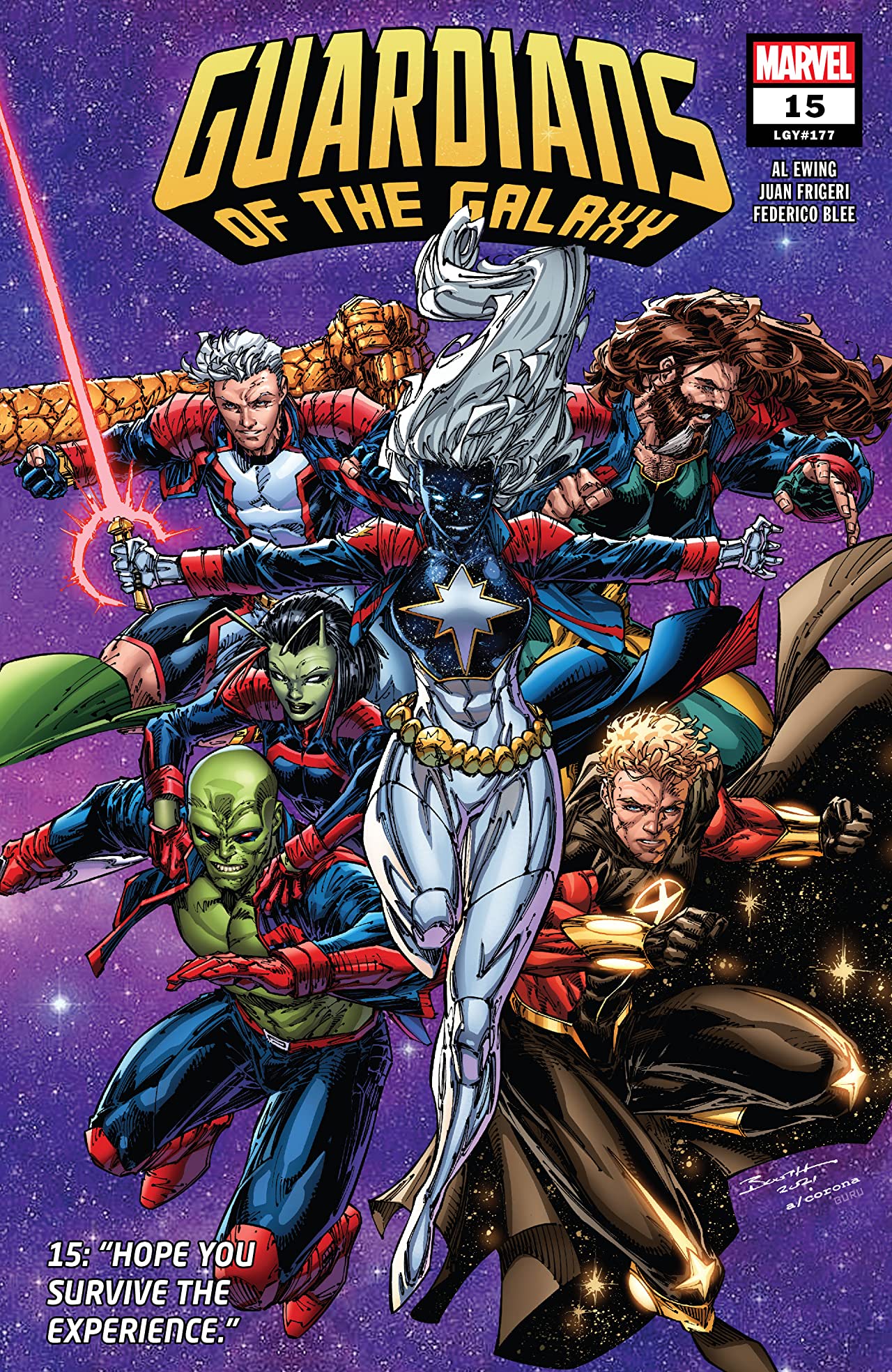 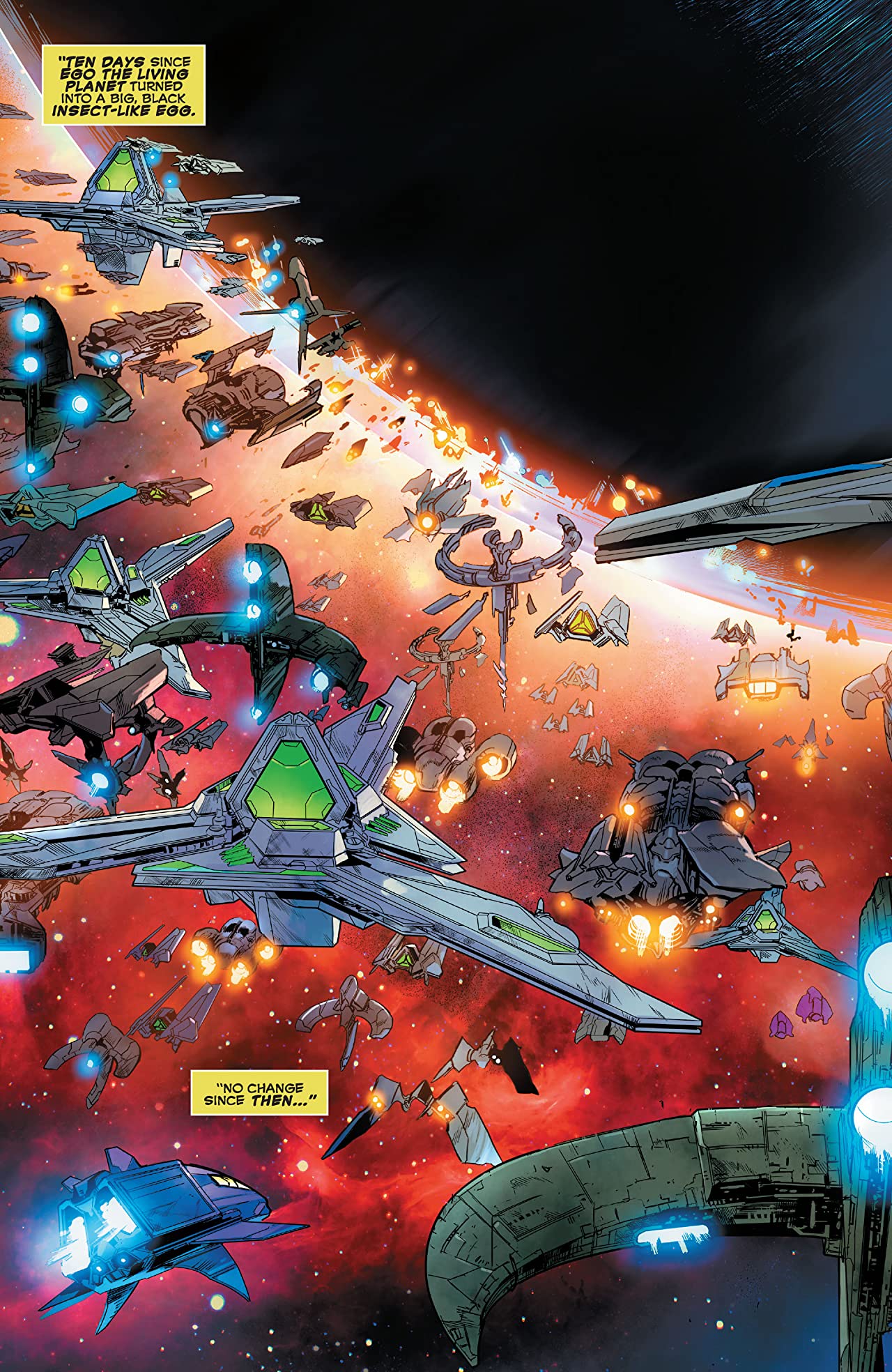 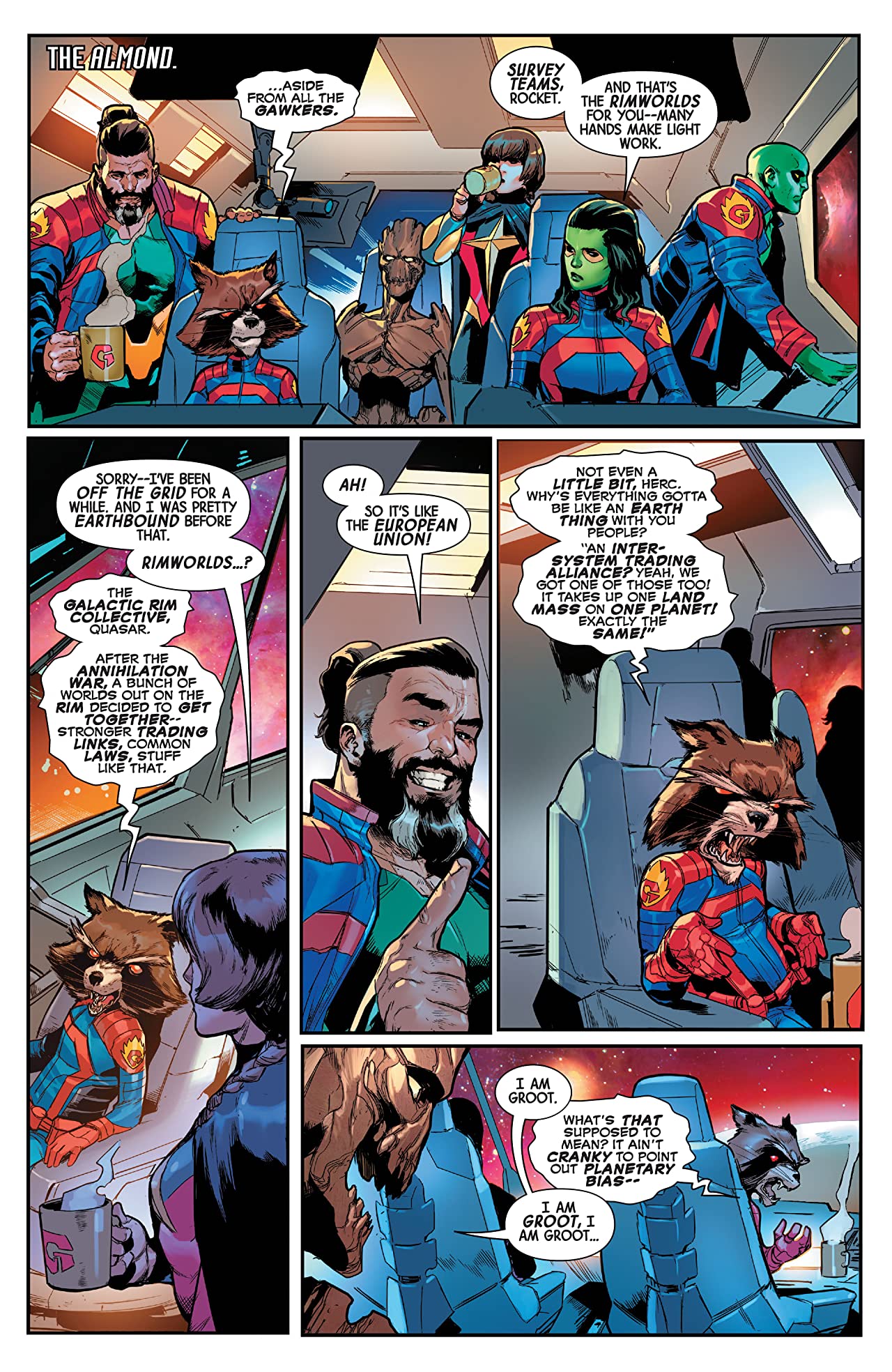 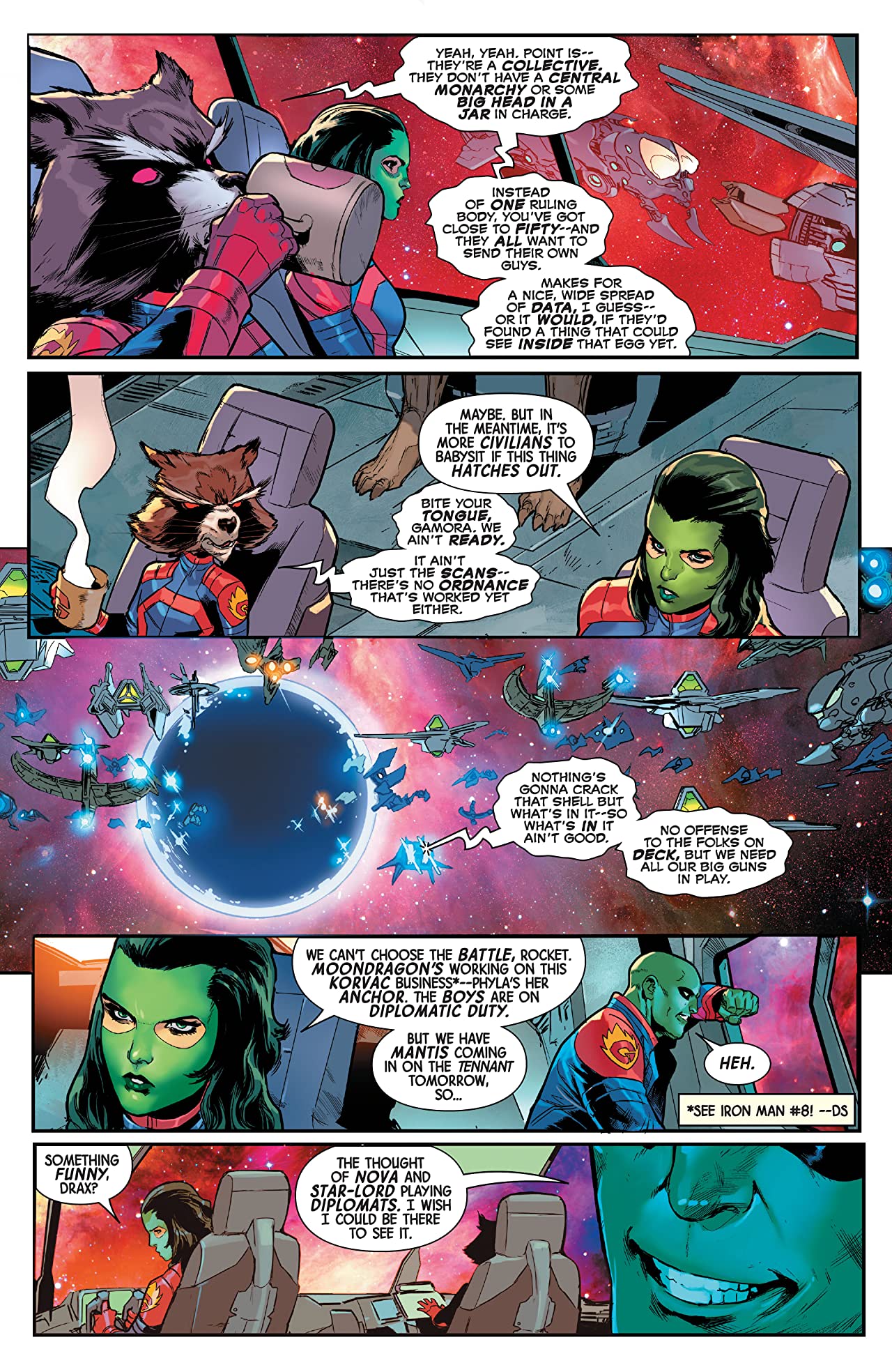