A Review of Guardians of the Galaxy #11

I enjoyed this issue for its walk down the memory lane of the Annihilation-era glory years of Marvel Cosmic. It was nice to finally see Marvel pay appropriate tribute to the genius of Giffen and DnA who realized that there was an important place in the Marvel Universe for military science-fiction/science-fantasy storylines and who went on to produce the un-arguably best era of Marvel Cosmic with Giffen’s Annihilation as well as DnA’s Nova (2007-2010) and Guardians of the Galaxy (2008-2011). These masterpieces have yet to be matched, but I have to give Cates and Ewing credit for beginning the walk-back from the absolutely deplorable Dark Ages of Marvel Cosmic ushered in by Bendis, who apparently thought Guardians of the Galaxy would be best written as a bad romantic comedy; and Loeb, who cynically sought to cash in on Cosmic’s surge in popularity by replacing Rich Rider with an annoying politically correct teen character. Out of disgust with Bendis and Loeb’s hatchet jobs on Cosmic, I quit buying Marvel comic books during their tenures and only resumed buying when Cates and Ewing began the process of rehabilitating Cosmic. Cosmic is not quite back to where I would like to see it, but we are perhaps at the beginning of a much-needed Renaissance if issue #11 of Ewing’s Guardians of the Galaxy is any indicator of things to come.

Sadly, since DnA’s iteration of Marvel Cosmic ended, hack-jobs have been perpetrated against pretty much all the Cosmic characters until the last few years when Cates began to give them the respect they deserve. Perhaps the most disrespect and the worst hack-jobs have been perpetrated against the Richard Rider Nova character. Giffen/DnA understood Richard Rider Nova better than anyone since Marv Wolfman and they both strengthened the core concepts that made Rich a great character in the first place – and introduced new concepts from their background in writing military science-fiction stories that took Rich to new heights of greatness. Instead of celebrating and enhancing this accomplishment with the character, Marvel stumbled all over itself to abandon the character and replace him with an inferior teen politically correct farcical Spider-Man wanna-be character. When Rich was finally resurrected, the hack-job continued with the elimination of the Worldmind, the elimination of the Nova Corps, the demotion of the character from Nova Prime, and the writing of the character as a broken soul – truly an epic failure on the part of the writers and editors who clearly did not understand the character or the proper use of the military science-fiction/fantasy concepts that made the Giffen/DnA iteration great. While I thought Cates wrote Rich as too angry/broken, Cates clearly liked and respected Rich, so I was able to enjoy his work for the most part even if I thought the characterization was off. There was quite a bit of much-needed character development and rehabilitation for Rich Rider in this 11th issue of Ewing’s tenure as writer. Ewing has chosen to rehabilitate Rich from a terrible case of bad writing/editing in the years since the DnA era ended by having him re-embrace his hard-won confidence and resolve from the Annihilation-era and exorcise the demons placed within him by bad writing by portraying him benefitting from psychotherapy. Along the way, we are reminded why Rich is such a great character by re-visiting his Annihilation-era accomplishments. I actually enjoyed seeing Rich heal from the bad writing of the past and rise to the challenge of the current Cosmic crises with the courage, resolve, and general bad-assery we have come to expect from him during the Giffen/DnA era. Now, Mr. Ewing, carry on with the rehabilitation by re-booting the Worldmind, resurrecting Xandar, and re-establishing a true Nova Corps with Rich Rider as Nova Prime. And for f***’s sake Marvel Editors, once Nova Corps is re-established, stop using them and Xandar as the Red Shirts of the Marvel Universe! Oh, and let’s keep pretending that that annoying little b*****d, Sam Alexander, doesn’t exist. A Cosmic Universe where I don’t have to see “Nova in Name Only” (NINO) Sam Alexander is a better Cosmic Universe.

Next in line for hack-jobbery since 2011 has been Star-Lord, Peter Quill. Thank you, Mr. Ewing, for realizing that the Peter Quill of the comic book universe does not have to be written the same as the Peter Quill of the cinematic universe! I won’t argue that Chris Pratt’s MCU iteration doesn’t sell movie tickets as it clearly does. I will argue that the MCU iteration doesn’t sell comic books and that it doesn’t make for great comic book writing and storylines. Englehart’s vision for Star-Lord was great for its time and Giffen/DnA took Star-Lord to new levels of greatness, but the MCU iteration shoe-horned into the comic books has been consistently both annoying and disappointing. In the Bendis et al iteration, he comes across as an immature, buffoon-ish, low-self-confidence, accidental hero who falls bass-ackwards into success out of dumb luck or with a little help from his equally buffoon-ish group of friends. Until recently, that has made for absolutely terrible writing and editing in my not-so-humble opinion. In issue #10 and now issue #11 of Ewing’s run as writer, he has at least attempted to split the difference between classic and MCU Star-Lord characterization and he’s come up with something that, while not up to the Giffen/DnA characterization, is something that I can live with for now. I’m liking this more mature, seasoned, insightful, determined, goal-directed, strategy-oriented hero. I’m liking the nods to the classic Star-Lord continuity and mythology. Yes, Mr. Ewing, write Star-Lord more like this. Resist regressing him to buffoonery just because there’s a new movie filming soon. You’ve rehabilitated the Element Gun. Now bring back Ship and the associated Star-Lord powers arising from Ship.

Moondragon gets some much-needed rehab this issue as well. She’s never been a particularly likeable or sympathetic character in my book, but I find myself getting more interested in her in this melding of the 616-Universe Moondragon with the Hero-Universe counterpart. She may emerge as a likeable character if Ewing’s rehab attempt on her works.

Certainly, Gamora, Rocket, Drax, and Groot also require rehab from bad writing/editing that has sought to make them mimic their MCU counterparts. I hope Ewing brings them back closer to their Giffen/DnA iterations soon with the exception of Drax. I think he needs to be written more like his pre-Infinity Watch iteration of old complete with his powers of flight and energy projection. The team needs that kind of powerhouse and frankly, Thanos-obsessed Drax was always more interesting.

Cabal’s art just keeps getting better with every issue. He is rapidly becoming my favorite Cosmic artist in residence at Marvel these days. Please keep doing what you’re doing, Mr. Cabal. Blee’s colors continue to impress and make Cabal’s art pop off the page. Please, Marvel Editors, keep Cabal and Blee working together on Cosmic for as long as possible. Albuquerque and Maiolo deliver superb Cover art with the Annihilation-era triumvirate of Nova, Star-Lord, and Gamora in the background overseeing the current portrayals of the triumvirate. It is a great cover and one of my favorites of this series thus far.

Buy this issue. Tell your friends to buy this issue. Let Marvel know that this more serious military science-fantasy iteration of Guardians of the Galaxy is what we want.

If the solicits for issue #13 are any indicator, it looks like Guardians of the Galaxy is going to be transitioning into a long-discussed but never realized “Cosmic Avengers” type format. I’m not sure how I feel about that right now as I’m not at all convinced that every team book must emulate The Avengers in order to be interesting or successful. It remains to be seen if it will work. I guess we’ll cross (or burn) that bridge when we come to it.

Guardians of the Galaxy #11 preview: 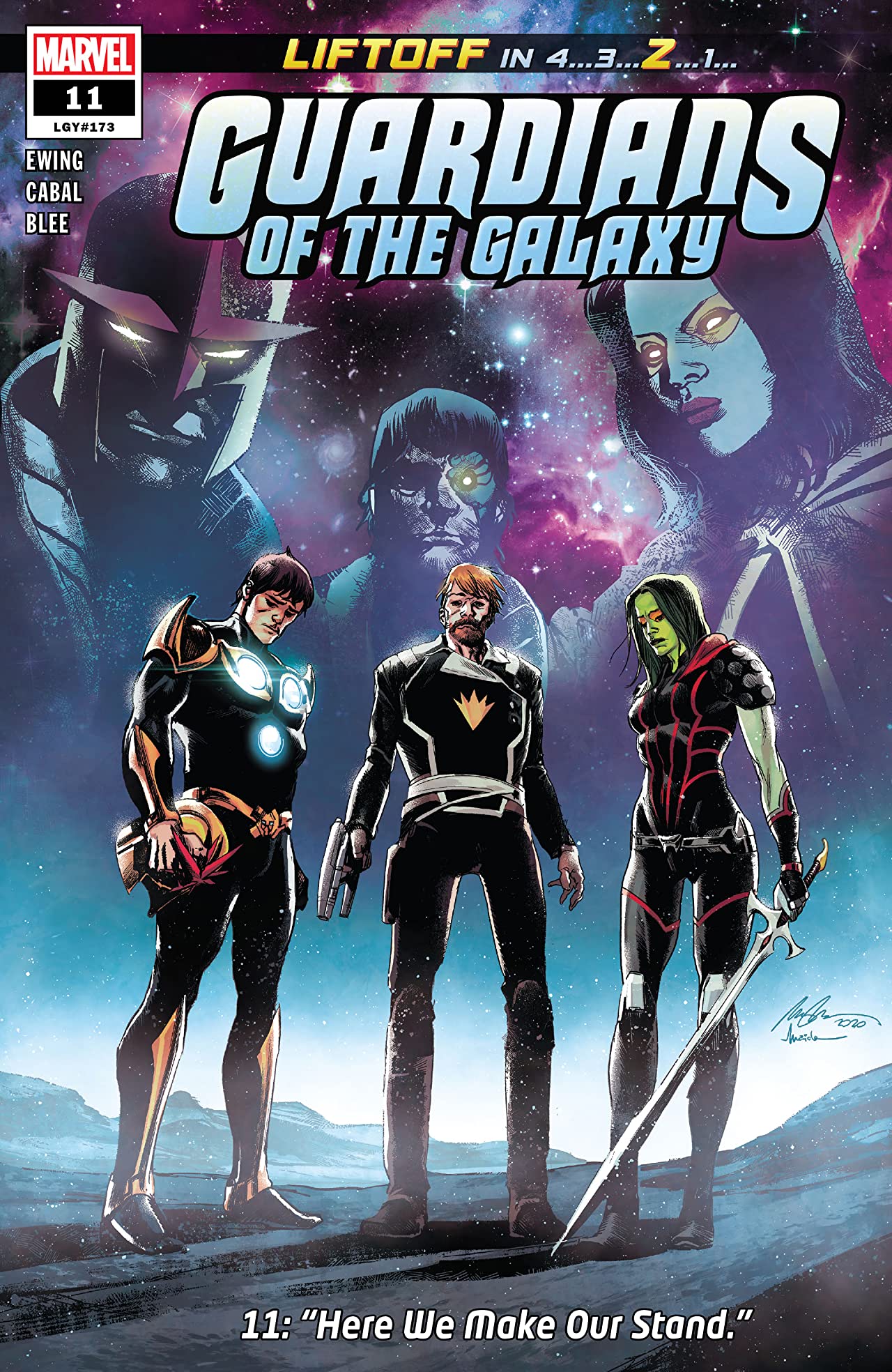 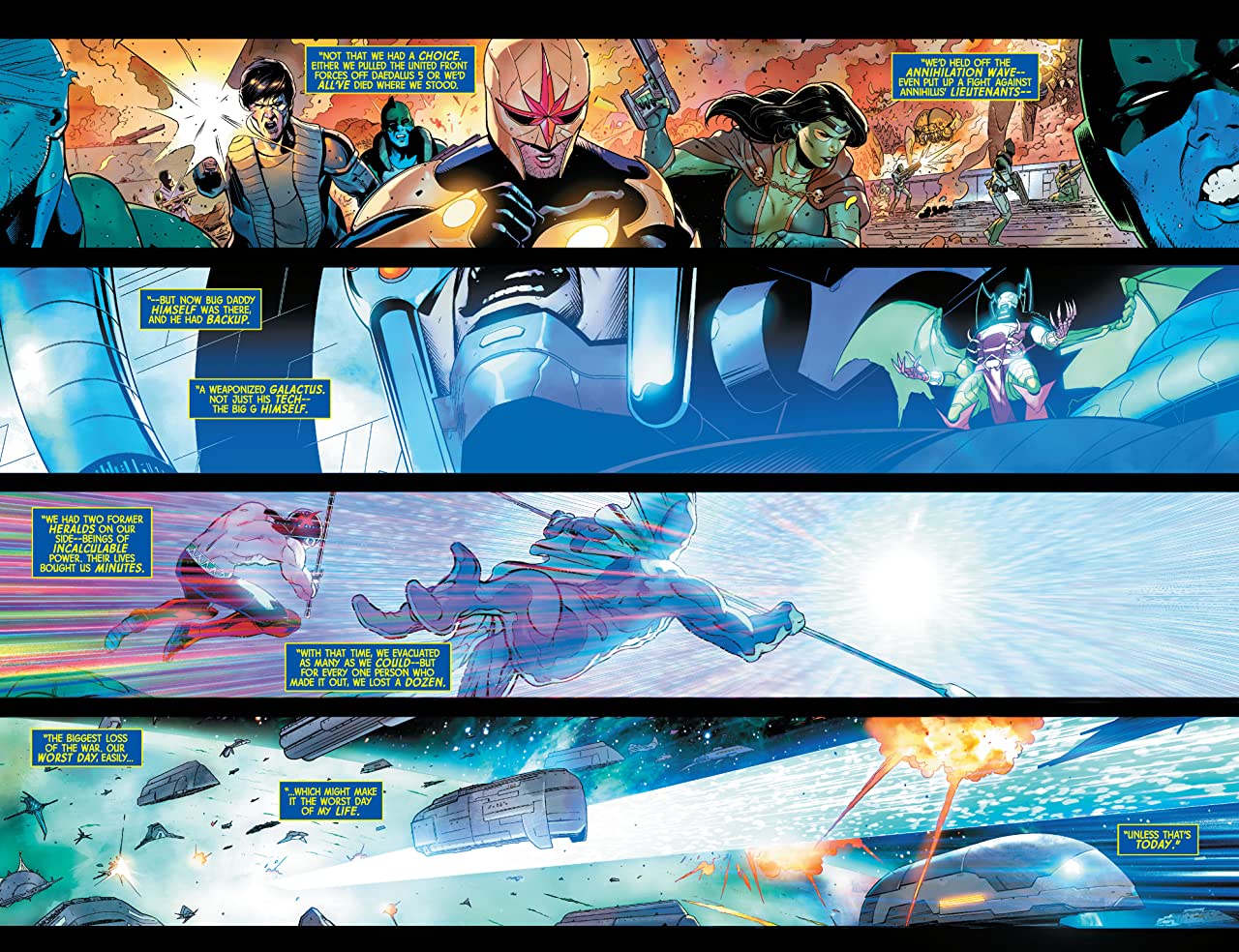 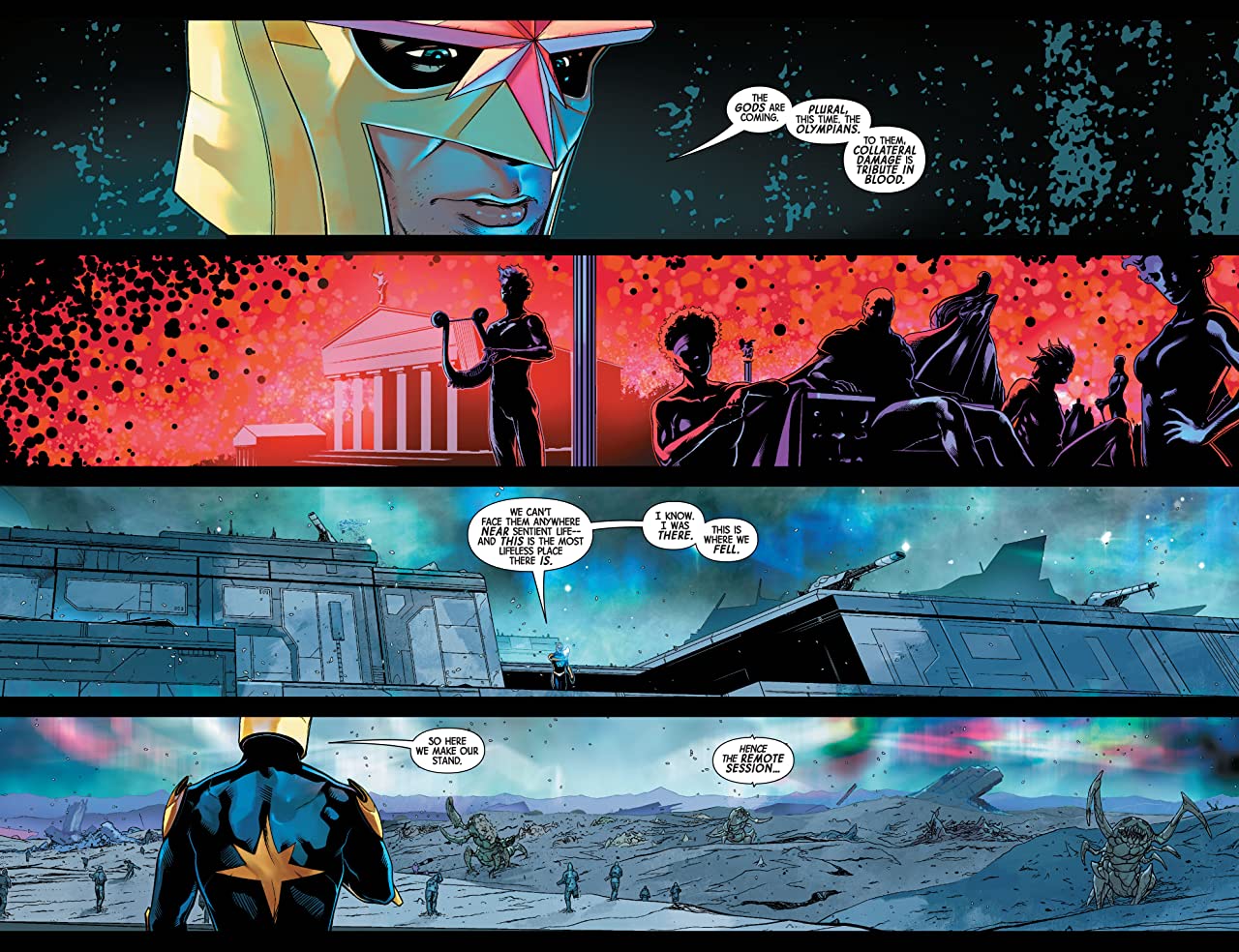