Bad news for Captain Marvel as comic book fans on social media have rejected the current version of Carol Danvers in the comic books.

A fan tweeted that the Captain Marvel comic book is currently the best comic book on the shelf and included art of the character using her hands like a gun blasting energy at a creature.

The tweet has received a lot of reactions from comic books fans, which can be viewed below, where, just as I have pointed out many times, the fans reply noting the comic book has never been a big seller (it’s been relaunched like a hundred times) and that the character isn’t all that powerful.

What is funny is that while promoting the release of the Captain Marvel movie starring Brie Larson, Kevin Feige actually said the character is one of the most popular and powerful in the comics, which was an obvious ploy to sell the character to his normie audience who has never purchased or read a comic book and never will (Feige now says Scarlet Witch is the most powerful in the MCU).

MCU rumors also offer Disney isn’t happy with Brie Larson, where interestingly enough we see the writing and directing team of the first movie is not returning and the sequel isn’t even titled “Captain Marvel,” but The Marvels, and has added new actors and characters. 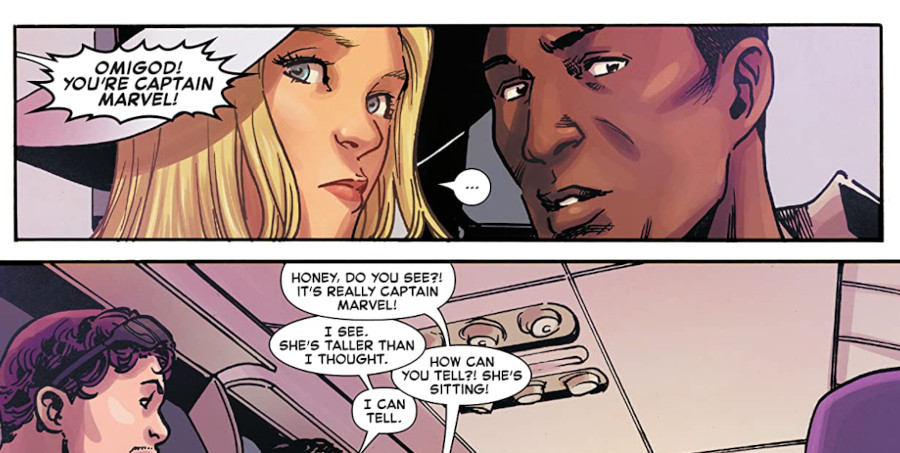 Aha constantly taking everything from every other hero. Ya okay fair enough.

LOL which reboot is this one? the 9th or 10th?,,,,In SEVEN FUCKING YEARS…. MY carol danvers from 1969-2012 was: Brave, Stoic, Strong, Humble.Good leader THIS thing called Carol Danvers is Obnoxious, Cocky, Poor Leader, MIsandrist, and murderer. NOT THE REAL CAROL DANVERS.

A character who was rebooted 12 times because the sales were bad everytime they come out with a issue #1? Hahahah you clearly don’t know comics at all. Shes hardly top tier in sales. pic.twitter.com/BgqpKs4AC8

This is why I hate the MCU. A second tier character, at best, about as physically strong as The Thing or She-Hulk is now a walking embodiment of The Power Cosmic. This is nonsense. Monica Rambeau was better.

Thank you for reading my mind. Next she will copy a different technique of his maybe his spirit cuffs? Or going full Demon?

Read the Brian Reed Ms. Marvel solo series from 06. Heaps better. Read ch. 31 “Family” if you want to break your own heart.

You mean the one that had to be rebooted like 12 times because no one cared?

Yikes , that’s depressing for the industry
The art is only so so even
They should just put this 12xfailed character out of her and our misery.
This is kinda blah even for the House of Ideology bullpen
Like New Defenders was more exciting
And better drawn
Marvel died years ago

I was going to post this gif as well , top tier taste man

Lol — Nope! Not even a little bit.

The Last Ronin is also vastly better. Batman 89, Superman 78, Hardware, Static, are all better too.

Captain Marvel is literally towards the bottom of current superhero titles.

Damn, I imagine how despicable the rest are if this is the best one.
Or do you take the “good ol super hero” standards of the golden age when writers had to deal with censorship and demand for political propaganda?

That statement says everything we need to Know about the state of modern western comics!——