It seems as if all those rumors have been correct as Disney appears to be distancing itself from Lucasfilm president Kathleen Kennedy in favor of Jon Favreau, the creator behind the popular Disney Plus Star Was series, The Mandalorian.

The Atlantic has published an article first titled in its print edition with the headline "A New Hope for Star Wars" and then published on its website with the title "How Disney Mismanaged the Star Wars Universe: And how The Mandalorian can restore the true power of George Lucas’s galaxy."

The basic gist of the article is that The Mandalorian does correctly what George Lucas did right with the Original Trilogy, while the prequels and Kathleen Kennedy's Disney Star Wars movies have failed.

Responding to a Twitter user who pointed out the article, Hollywood producer Kamran Pasha, known for Roswell: New Mexico, The Substitute, Nikita, Kings, Bionic Woman, Sleeper Cell, and more, pointed out "this article is a decapitation move by Chapek against Kathleen Kennedy" and notes those rumors from YouTuber Doomcock are correct.

"I wonder how much longer my Lucasfilm stalker is going to have a job after this? The Atlantic is deeply connected to the Hollywood Club. This article is a decapitation move by Chapek against Kathleen Kennedy. @doomcock was right (and I kinda predicted it too on @Midnights_Edge)," tweeted Pasha. 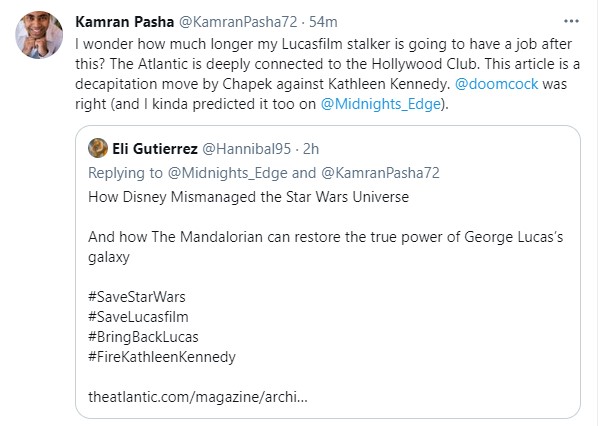 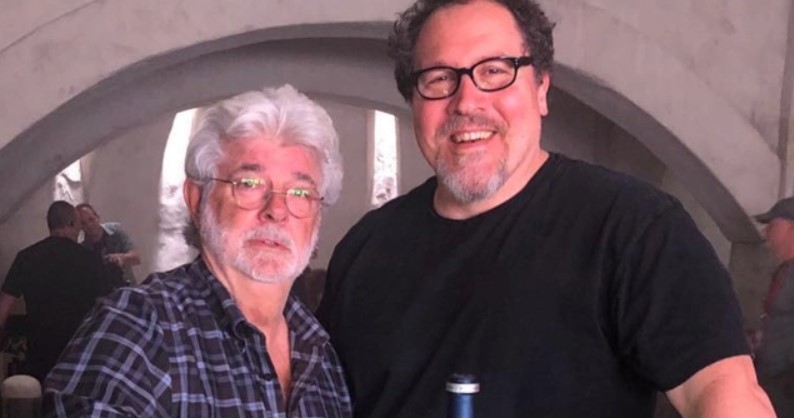 Regarding the rumors, it has been claimed a Star Wars "civil war" has been taking place within Lucasfilm between Kathleen Kennedy and those that support her, and Jon Favreau's camp, which includes those who are also behind the upcoming Boba Fett spinoff as well as the Rosario Dawson Ahsoka Tan series and the delayed Rangers of the New Republic series which was to star Gina Carano.

While Kennedy's Star Wars movies have failed (simply look into Disney's quarterly investor earning reports), Favreau's has succeeded. It's claimed that Kennedy is leaving Lucasfilm soon, that Indiana Jones 5 will be Kennedy's last movie, and that Jon Favreau could become the new president of Lucasfilm and in charge of Star Wars.

So it appears as if the article by The Atlantic is more or less a hit piece by Disney and CEO Bob Chapek against Kathleen Kennedy and in support of Jon Favreau's Star Wars.

• The Star Wars franchise offers action and escapism, but re-enchanting our own world was always its greatest trick. As Luke Skywalker rises from backwater farmhand to galactic savior over the course of the first three films, audiences gain a visceral sense of why the galaxy he lives in is worth saving.

• Right now, Star Wars is at a turning point.

• Though early acclaim and profits were impressive, creative troubles began to hurt the bottom line. In 2019, dismayed reviews and relatively soft ticket sales greeted The Rise of Skywalker, the finale of a trilogy set 30 years after the action of the first films. Around that time, Disney’s CEO, Bob Iger, announced a moviemaking “hiatus” for Star Wars.

• Had Lucas’s galaxy lost its power, or had its new stewards simply mismanaged it? The recent success of a remarkable Star Wars television series suggests the latter.

• By the end of Season 2, a critical consensus had emerged: It was the best live-action Star Wars product to arrive since the early 1980s.

• Whenever Star Wars films have faltered with audiences, commentators have blamed shoddy storytelling: the needless complexity of Lucas’s prequels, the inconsistent logic of Disney’s sequels.

• The Disney sequels are too frantically paced—and too packed with winks to old Star Wars films—for viewers to settle in with the new sets, creatures, and costumes.

• If the miracle of The Mandalorian continues, viewers of future seasons will only rarely notice an overdetermined hand of fate guiding the action. They’ll instead continue to be caught up in individual moments.

Read the full article at The Atlantic.