With Marvel Comics bringing back the X-Men in November as well as going back to their fan-friendly approach under new EIC C.B. Cebulski, Marvel now dominates the comic book sales market.

For a while, Marvel and DC Comics were pretty much neck and neck, due to Marvel's liberal and anti-fan friendly approach to comics, which included replacing fan-favorite characters and being hostile to the fans.

Now we see with Marvel giving fans what they want, which I have been stating literally for years, they see a huge sales bump, which will more than likely continue in the coming months.

We see in November that even though Marvel gave Uncanny X-Men #1 a hefty price tag of $7.99, fans still gobbled it up. Heck, I'd pay $20 a month for an Abnett Nova series or Quasar.

Compared to October, Marvel Comics jumps from a 34% dollar share to near 41% in November; likewise, its unit share jumps from 38% to almost 44%.

Worth a mention is that DC is tanking, which interestingly enough follows Brian Bendis coming to the company, who was partly responsible for Marvel Comics' disastrous run during the Alonso years. A guy like Bendis (similar to JMS) should never be let anywhere near Superman. To boot, when you have the DC Universe twitter account f-bombing President Trump (and conveniently none of the shill sites reported on it, or those that did covered it up, and DC also never responded to my inquiries) it's no wonder fans don't want your product. DC also removed Abnett from Aquaman - with a new movie coming out - and put Bendis' Kelly Sue DeConnick on the title. Sound familiar Guardians of the Galaxy fans?

It should also be noted that Marvel Comics basically canceled and killed off X-Men titles and characters (and Fantastic Four), but now that Disney is buying Fox Studios, the characters return. At one time, the X-Men were Marvel Comics' biggest property and bigger than the Avengers. Now we see with the X-Men back, the fans also return. Who would have thought, right?

Here is Diamond's info and charts for comic book sales in November 2018:

One of the most storied titles in comic book history returned in November as Marvel Comics relaunched Uncanny X-Men #1 in an oversized issue from an all-star roster of writers and artists, giving Marvel Comics the best-selling comic book of November 2018 according to information provided by Diamond Comic Distributors, the world's largest distributor of comics, graphic novels, and pop culture merchandise.

Venom faced the most powerful adversary he had ever faced in Marvel Comics' Venom Volume 1: Rex by Donny Cates and Ryan Stegman, the best-selling graphic novel of November. In total, Marvel had seven titles in the top ten, including Thanos: The Infinity Conflict at #2, Will.I.Am and Damion Scott's Black Eyed Peas Presents: Masters of the Sun: The Zombie Chronicles at #4, and Amazing Spider-Man Volume 1: Back to Basics, the first volume of Nick Spencer and Ryan Ottley's run on the title, at #5. DC Entertainment had two titles in the top ten, led by Justice League Volume 1: The Totality by Scott Snyder, Jim Cheung, and Jorge Jimenez at #3, followed by Sean Murphy's Batman: White Knight, October's best-selling graphic novel, at #7. Image Comics also had a title in the top ten; Mirka Andolfo's Unnatural Volume 1: Awakening ranked #8.

Dark Horse Comics' The Legend of Zelda: Breath of the Wild: Creating a Champion, an art book that delves into the creation of the latest game in the fan-favorite Nintendo franchise, was the best-selling book of November.

DC Collectibles' DC Comics Bombshells: Batman & Catwoman Statue, based on Ant Lucia's pin-up styled artwork and sculpted by Jack Mathews, was November's best-selling toy product. In total, DC Collectibles had three products in the top ten including the Batman Black & White: The Batman Who Laughs Statue at #2 and the DC Cover Girls: Catwoman by Joëlle Jones Statue at #10. Diamond Select Toys had four products in the top ten, led by the Marvel Gallery: Venom (Comic Version) PVC Figure at #2.

Shinobi 7's My Hero Academia Card Game, based on the popular manga and anime, was November's best-selling game. IDW Publishing had two games in the top ten: the Batman: The Animated Series: Gotham Under Siege Game ranked #4 and Teenage Mutant Ninja Turtles Munchkin, a special edition of the popular Munchkinboard game, ranked #6. 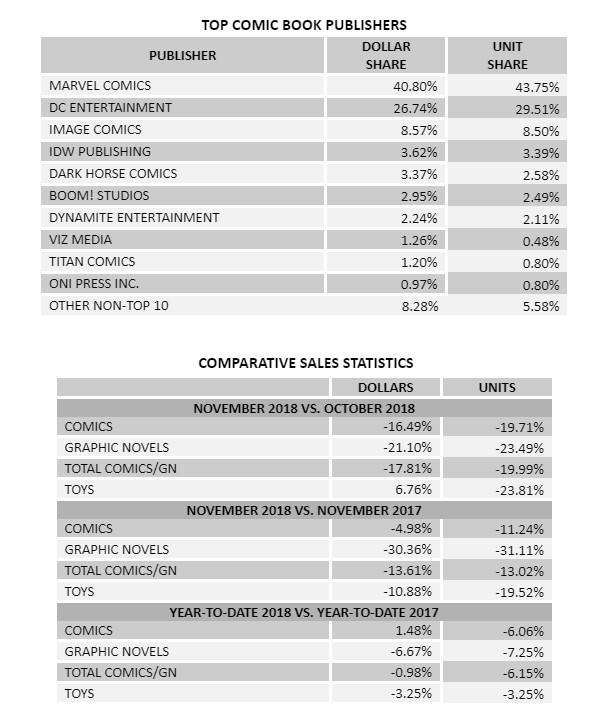 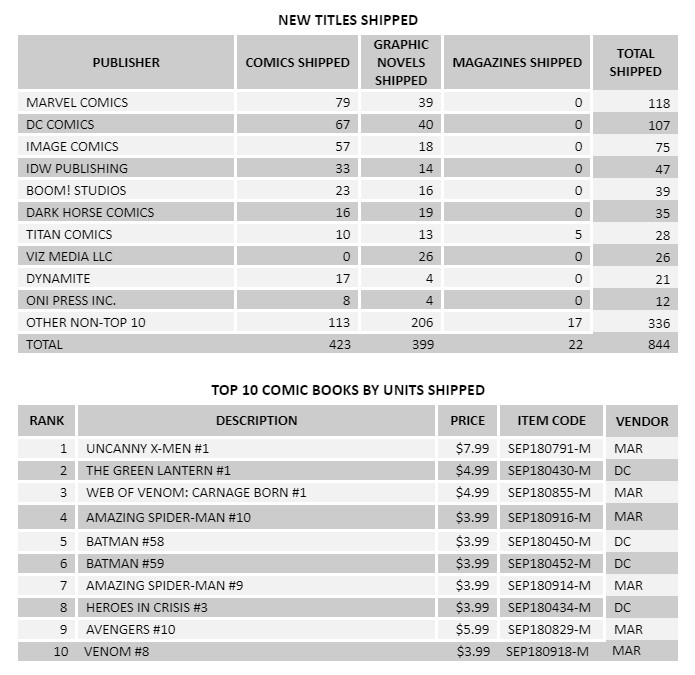 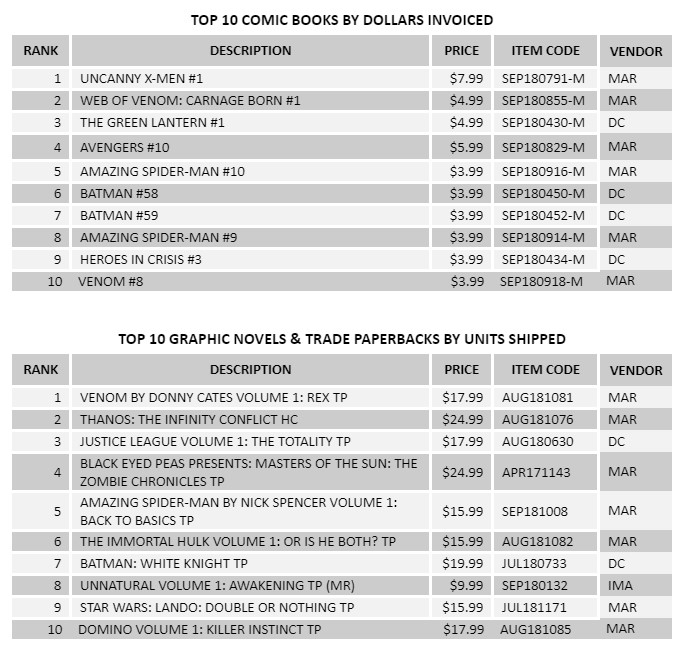 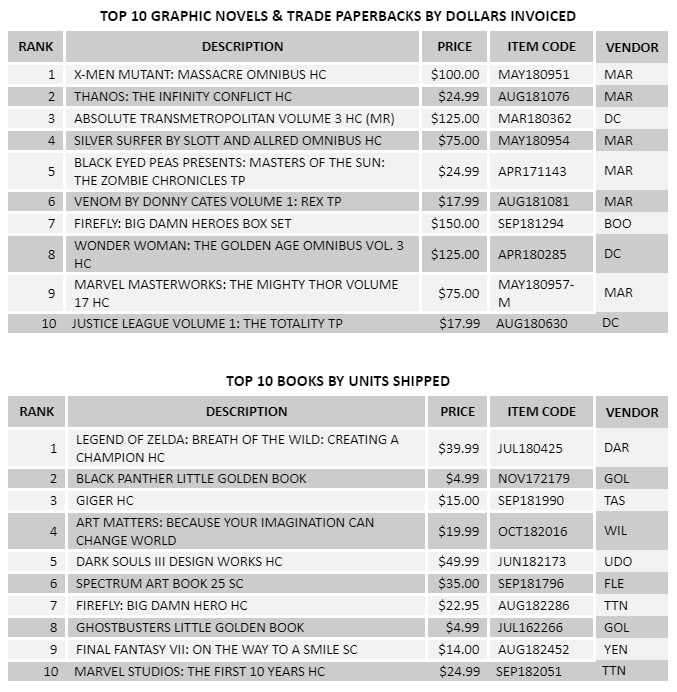 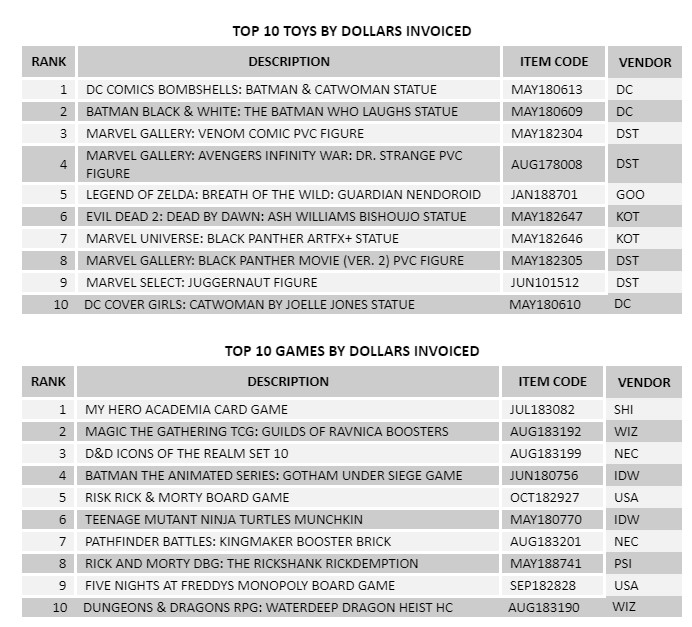 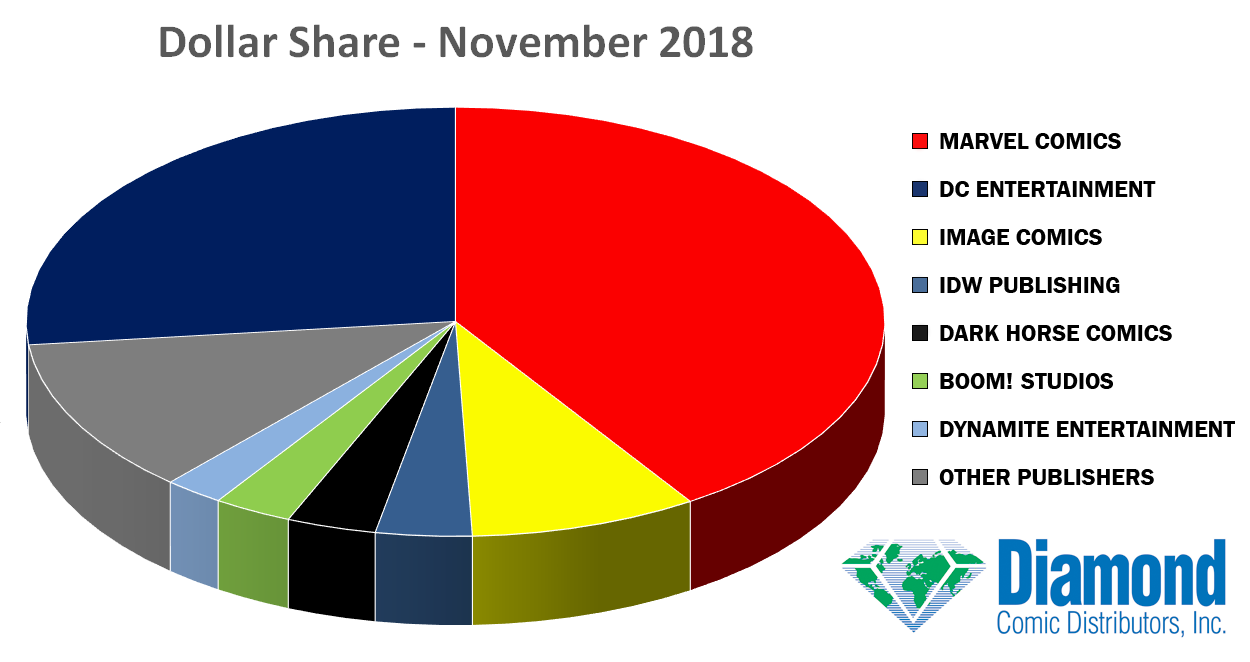 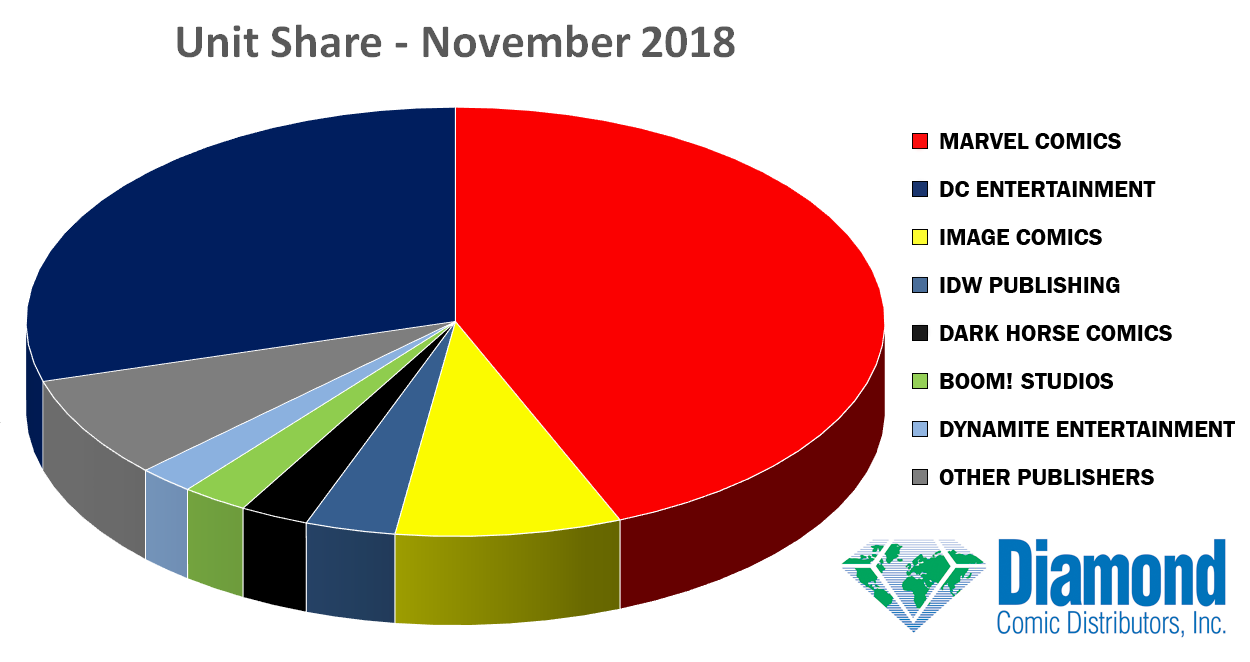