Zack Snyder posted the following images, which features a host of symbols, on the Vero app with a link to purchase.

“My contribution to the T-shirt campaign,” Snyder posted. “Thank you to Adam Forman. It was fun putting this together.”

Proceeds for the charity t-shirt go to raising money for suicide awareness and prevention. Snyder’s daughter committed suicide in March of 2017 at the age of 20. 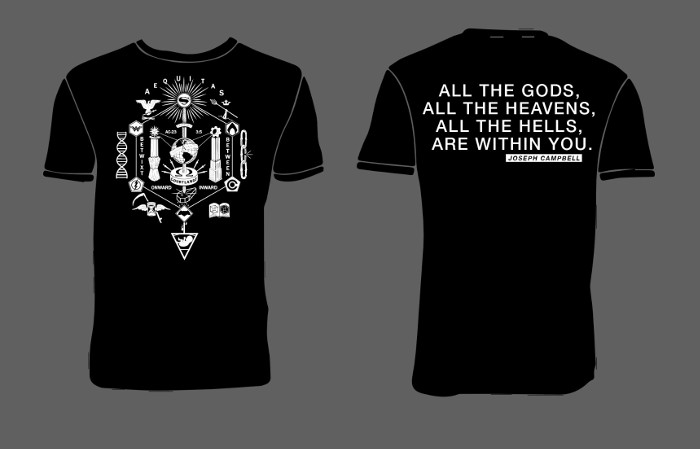 The back of the shirt features a quote from Joseph Campbell, whose most well-known work includes “The Hero with a Thousand Faces”: “All the gods, all the heavens, all the hells are within you.”

The front of the image looks to be based on the Kabbalah (Tree of Life) and Freemasonry (The Masters Carpet), which ties into the Campbell quote, and it features symbols for the Justice League including Superman, Wonder Woman, Aquaman, The Flash, Cyborg and Batman.

Strung along the top is the Latin word “Aequitas” which means justice, equality, conformity, symmetry, or fairness, and is the origin of the English word “equity.” Aequitas also represented divine personification in Roman times and was used on coins representing honest measure.

The left of the image features the double helix, also known as DNA, which by some is a symbol of two snakes.

The word “Betwixt” follows which could be a reference to the Bible as it was used to show the promise between Abraham and God (circumcision). It’s also used in Freemasonry representing the covenant or friendship between brothers.

The two pillars are there, which again is related to Freemasonry, as they are the pillars of Solomon’s temple, Boaz and Jachin, as well as representing the two temples that were destroyed. On top of the pillars are symbols including a variation of the all-seeing eye and the blazing star on the left, with a half moon on the right.

On the right is a broken chain, along with the word “Between.” It could symbolize the breaking of the chains that bind us (Prometheus).

Snyder also includes the 24th and last letter of the Greek alphabet, Omega, which also happens to represent Darkseid (Omega beam). In Snyder’s Batman v. Superman, he included a Knightmare Batman scene featuring the Omega symbol in an alternate universe where Darkseid destroys the Earth and Superman becomes bad, and it is also thought a Knightmare scene was also going to be a part of his version of Justice League.

The bottom right also reveals cube symbols, which are symbols of Saturn, and were used in the Snyder movies as the three Mother Boxes (also seen in The Avengers as the Tesseract, Transformers movies with the Allspark, etc). The Justice League symbols are also using a hexagon, which is an imprint of a cube.

Snyder’s The Stone Quarry production company fits with these symbols as well, which he describes as, “A sacred creative space that has been four years in the making.” 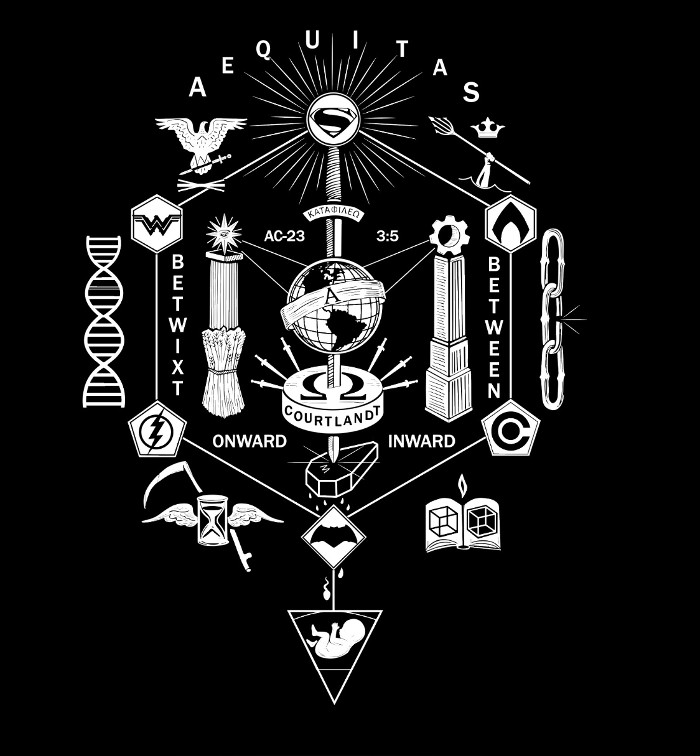