Following the rumors, Stephen Amell confirmed that following a shortened Season 8, Arrow will be canceled. Now The Flash star Grant Gustin responds in a heartfelt post on Instagram.

“It kinda just hit me this morning that Arrow will be leaving us next year,” Gustin said on Instagram. “Ever since I started doing this, it’s always been ‘Flash & Arrow’ (or really this should of said ‘Arrow & Flash’ on it’s cover….right, Stephen?). We don’t get to see a lot of each other, because we both work very similar schedules, on different shows, for 9 1/2 months out of the year. But when we’re brought together for those grueling crossover episodes, it always results in something pretty special.”

Gustin continued, “And not JUST a special kind of hell. It’s just absolutely bananas to stand around with that many people in super suits, and get paid to play make believe on tv. It’s something that wouldn’t happen year after year if it weren’t for the groundwork that Arrow, Stephen and the whole cast and crew laid for us. Not just that, but Stephen has always brought a different kind of passion to his show and the whole Arrowverse. It’s always been clear to me how much it means to Stephen to have the privilege of getting to go on this journey as Oliver Queen. And how much care he’s always put towards it.” 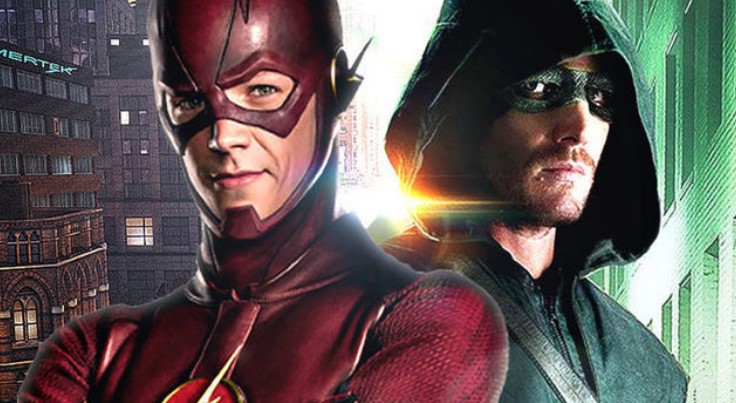 Grant Gustin also thanks everyone involved with Arrow and Stephen Amell.

“I will never forget ohh soo many memories we shared together during our hundreds, if not thousands of hours of crossover filming,” Gustin said. “Thank you to everyone who was a part of making Arrow for letting me come on this journey with you all. Congratulations on a badass show that will live on forever. I’ll never forget binge watching season one and being scared shitless my first day on set, seeing you all in person. Stephen, you’re a legend. Maybe this means we can hang out more?”

Regarding the rumors that said Arrow was going to get canceled, they also said both Legends of Tomorrow and Supergirl would get canceled, that the Arrowverse would be “drastically different” following the upcoming Crisis On Infinite Earths crossover, but the good news for Gustin is that apparently The Flash is safe and will continue.

For the people that wanted “new pics”. I don’t take a lot on set. But here we are, still standing towards the end of the crossover this year.