Yesterday saw Todd McFarlane announce that he will be returning for art on Spawn #300 along with Greg Capullo, and that Scott Snyder will be helping out with the writing.

You can watch the video and check out the official info below!

LAS VEGAS, Nev. 05/20/2019 — Todd McFarlane’s SPAWN character sets the stage for a historic celebration as it breaks the record for the longest-running, creator-owned comic in the world. To mark this momentous occasion, McFarlane has gathered a team of superstars from the comic industry to contribute to this giant sized 72-page book.

The big news for SPAWN #300 is that award-winning artist, Greg Capullo (Batman), returns to illustrate SPAWN. Capullo first brought his talents to Image Comics' longest running title, with issue #16, leading to a visually-stunning run as the book’s featured artist, culminating in the hallmark 100th issue.

Following his seminal work on DC Comics’ iconicBatman, Capullo will be the main featured interior artist on SPAWN #300, alongside another major revelation...

For the first time since 1995, Todd McFarlane, one of the top-selling artists in comic book history, will return to pencil and ink interior artwork of the character he created during his high school days!

“I created SPAWN back when I was a teenager hoping to someday break into the comic book industry,” said Todd McFarlane, SPAWN creator, and President at Image Comics. “Now, over 40 years later, not only was I able to have a career drawing and writing comics, but SPAWN has been by my side for most of that journey. Even more exciting, SPAWN is becoming the longest running creator-owned comic in the world!

“The group of creative folks helping out on this historic SPAWN 300th issue is something that I hope thrills the ‘inner 15-year-old' in all of us. Plus, to have Greg Capullo come back to this title after so many long years, is what has me most excited as I personally consider him to be the top talent drawing in our industry today.”

The birth of Image Comics in 1992 was an exciting time, but there are few moments I remember more vividly than getting my hands on the first issue of SPAWN,” said Eric Stephenson, Publisher & Chief Creative Officer at Image Comics. “Todd was already a comics superstar at that point—but SPAWN vibrated with an energy all its own and I think everybody knew it was destined not only to be a hit but to stand the test of time. The fact that we’re approaching issue 300 nearly 30 years later is a testament to its impact not just on Image, but the industry as a whole. Go, Todd!”

SPAWN #300, a 72-page full-color comic book, celebrating 27 years, and counting, of the hit independent series with an all-star lineup of comics creators, will be in stores August 29, 2019. The title will feature 12 covers by McFarlane, Capullo, Campbell, Opeña, and Alexander, including gorgeous black and white “Artist Edition” variants showcasing the original, inked artwork of both Capullo and McFarlane. This historic, oversized issue will retail for $7.99. 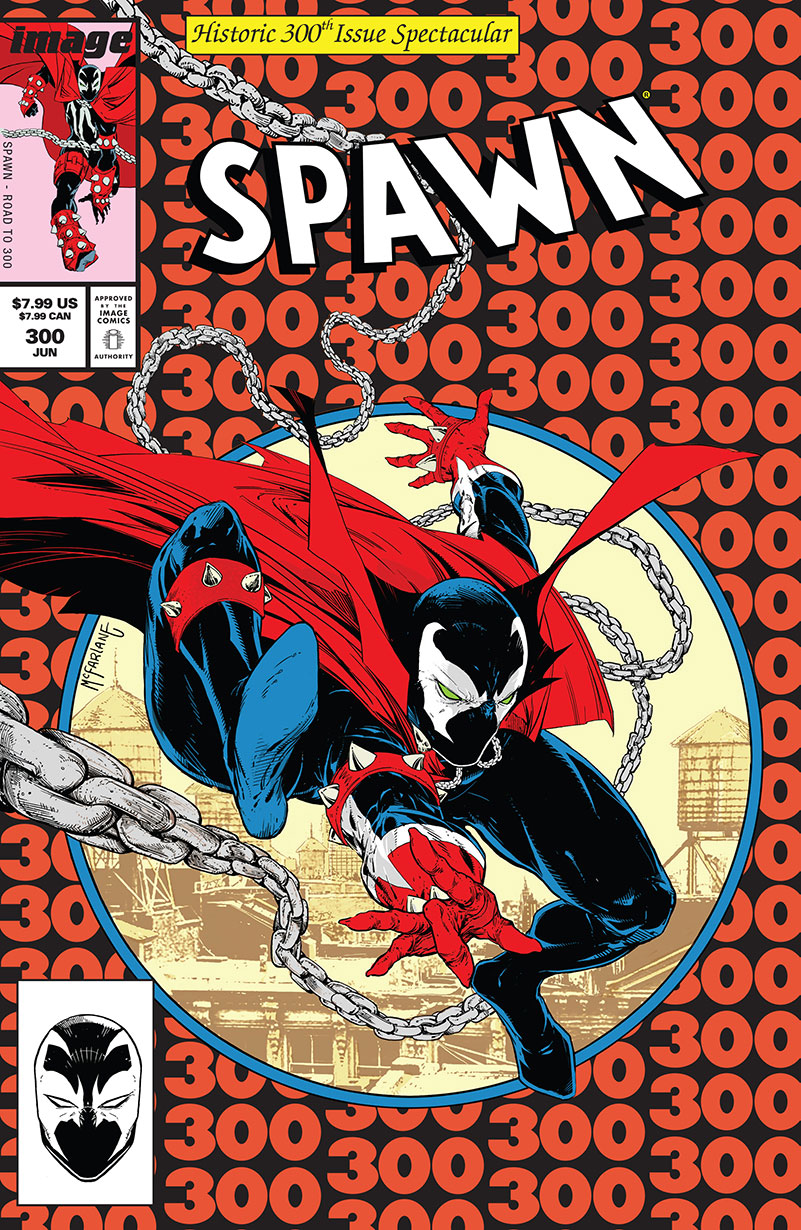