Nova and Guardians of the Galaxy 2019

(Editor’s note: The opinions expressed herein are purely the opinions of the author of this article and do not necessarily reflect the opinions of CosmicBookNews. Timelord regularly reviewed the 2007 ‘Nova’ and 2008 ‘Guardians of the Galaxy’ series with his reviews directly sent to the books’ editor and creators. Timelord’s reviews have been quoted by Marvel in cover blurbs, press releases and solicits. ‘The Cosmic Triune’ is a series of opinionated articles on the state of Marvel Cosmic.) 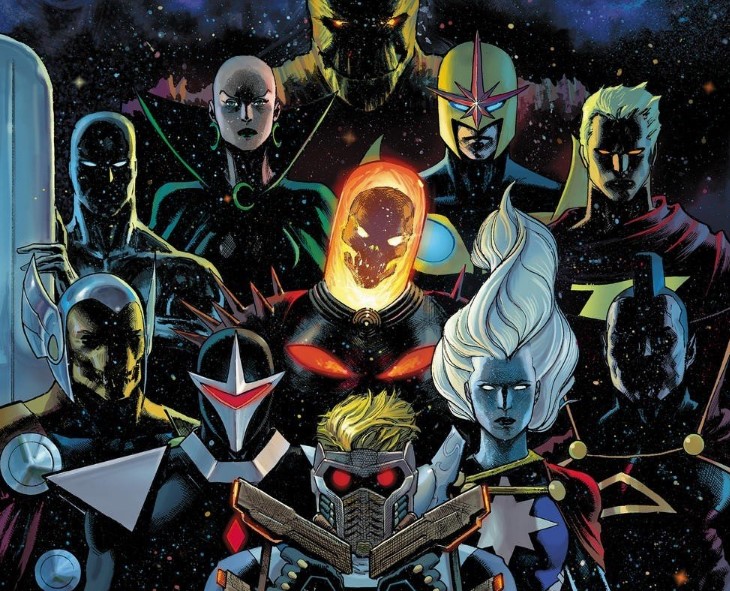 Marvel alienated (pun intended) me years ago when they canceled DnA’s Nova and Guardians of the Galaxy, quality series made for true cosmic fans, and replaced them with Loeb’s NINO (Nova in Name Only – yeah – I’m the one who coined that term) and Bendis’ Garbage of the Galaxy (B-GotG – yeah – I’m the one who coined that one, too). I considered that move a totally cynical money grab on the part of Marvel, Loeb, and Bendis – cashing in on the popularity of the MCU’s Guardians of the Galaxy film after neither Marvel, Loeb, nor Bendis had ever been particularly interested in Cosmic prior to the success of the GotG movie, considering Cosmic a “fringe” area worthy of little attention or resource allocation.

Now, I appreciated Gunn’s movie versions of Guardians of the Galaxy for what they are – a near self-parodying version of the more serious material upon which they are based designed for mass market appeal – and I even enjoyed the movie versions in that light despite their goofy “approaching high camp but not quite crossing that boundary” bastardization of the source material. I personally think a more serious approach with the source material would have been just as successful, but we’ll never know for sure now as the “damage” has been done – as those who never understood or even really liked Cosmic and who are charged with making decisions about comic books and movies came away with the impression that the key to success in cinematic and comic book presentations of Marvel Cosmic is “goofy self-parodying” stories. Sure, Deadpool has been very successful cinematically and in the comic books using the same approach as was the Thor: Ragnarok movie, but for the most part, the other comic books and movies have played it fairly straight with great success. Why not Cosmic, too? After all, the Cosmic concepts are really no more outlandish. In fact, I’d argue that Cosmic concepts are less outlandish than Earthbound superheroic fantasy. But that argument is for another op-ed.

In short, I hated what Bendis and Loeb did with the characters and concepts. Bendis recently admitted that he never read DnA’s treatment of the material and, though to my knowledge Loeb has not made such an admission, it wouldn’t surprise me to learn he also never read it. And even if both had read it, it probably would have made no difference as they were not writing as fans of Cosmic or even to fans of cosmic. Bendis was cynically writing mind-numbingly juvenile-level sit-com/rom-com trash that just happened to be set in space once in a while (literally – Garbage of the Galaxy) aimed at the lowest common denominator of comic book buyer. Loeb, and those who followed him with his NINO concept, were cynically and vainly once again trying to re-capture Spiderman success – a formula bound to fail if for no other reason than it offended and alienated the greater part of the existing Richard Rider Nova fan base who have long since moved beyond the attempt to re-capture Spiderman’s success with the 1970’s Nova iteration. Bendis and Loeb’s cynical treatment of the fan base offended me, so I spoke out against it on this very website and at other venues, and I quit buying Marvel products for a long time. 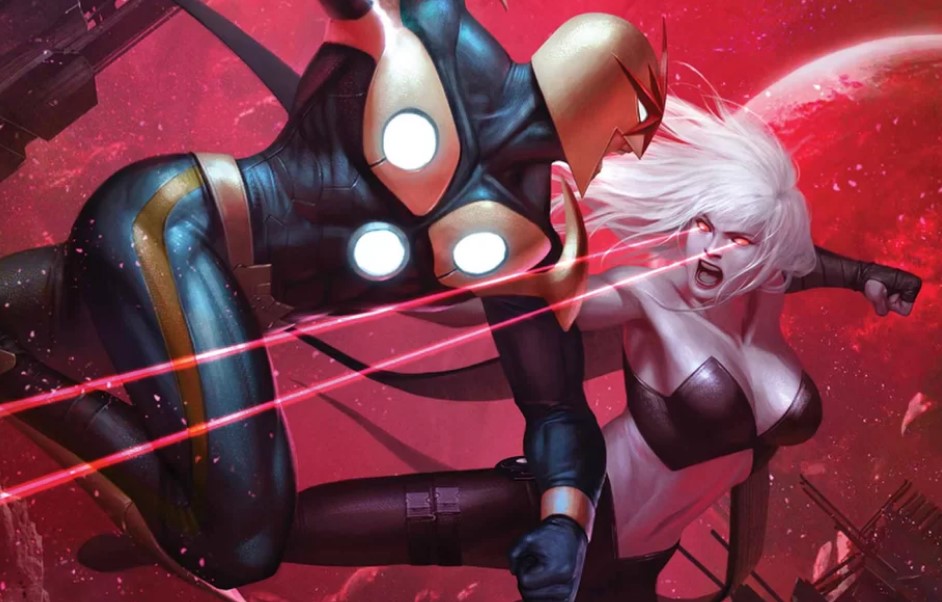 I checked back in when it was announced that Rich Rider had been resurrected, but I was disappointed with the hack-job treatment of the character and concepts – and especially with Marvel’s insistence on pushing the NINO Sam Alexander character onto the Nova fan base, so I quit buying once again. Apparently, so were the other true Nova fans, as that series mercifully died a quick death.

Now there is renewed interest in Cosmic as the MCU has made it clear that the next phase in the MCU will be Cosmically-oriented. So, I decided to check in again as, no surprise, the comic books are following the MCU and there is renewed interest in Cosmic concepts. I was curious to see if the decision makers for the comic books have learned anything since Alonso, Bendis, and Loeb’s disastrous tenure. After a brief sampling of Guardians of the Galaxy #1 and The Black Order #3, which I bought only because Rich Rider Nova was featured on the cover, the answer is………..maybe.

What worked for me with these two storylines was the overall more serious tone. Sure, there were elements of humor – but it stopped way short of self-parody. Nice. Maybe we can all move beyond Gunn and Waititi’s cinematic goofy bastardizations of the material, realize that comic books appeal to a different and much more select audience than the movies, and get back to telling good stories to the long-term fans who take the craft seriously. The characters were treated with respect, the art was good, and, thankfully, Star-Lord is acting less like a teenager. Still not up to the mature adult stature of the DnA years, but better than Gunn and Bendis’ goofball take. 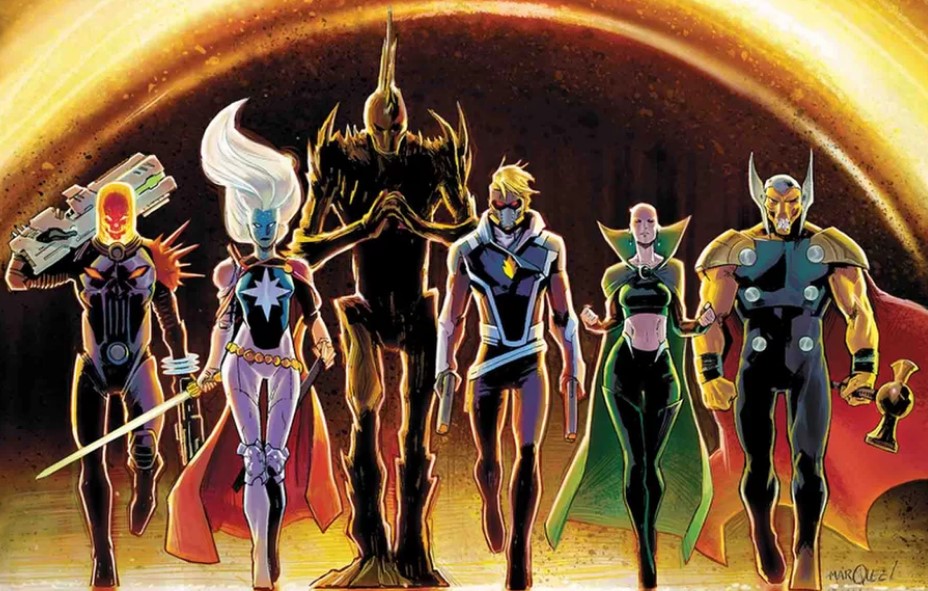 I also liked it that the Nova Corps is starting to be treated with some respect. I hated the “Keystone Cops” non-super-powered take on the Corps started by Gunn and continued until recently in the comics. We’re now seeing the Corps emerge as a force to be both respected and reckoned with – and it’s about time that the Corps at least started to get back to its Xandarian roots. My personal bias is that the Corps works best as the Special Forces branch of the Xandarian Star Corps – as it was portrayed in the original Nova series and in the Firelord origin story. I’d like to see Xandar restored/resurrected and the Corps portrayed not as “Space Cops” (too Green Lantern-ish) but as a military branch as it used to be.

I was disappointed in the “bait and switch” of Rich Rider being portrayed as a new Guardians of the Galaxy member on the cover and then not appearing at all in the book. But if he guest stars occasionally in the book and is treated with respect, I’ll be satisfied. The line-up of the new GotG? Not too excited about Cosmic Ghost Rider (eye roll) or the elimination of a huge portion of cosmic characters from the storyline, but I can live with rest of the crew. At least they’re not imposing Iron Man, Venom, or The Thing on us again. I’m going to give it a chance. Marvel, you get my money again at least for now. And maybe long-term again if you make Star-Lord more like the DnA version. 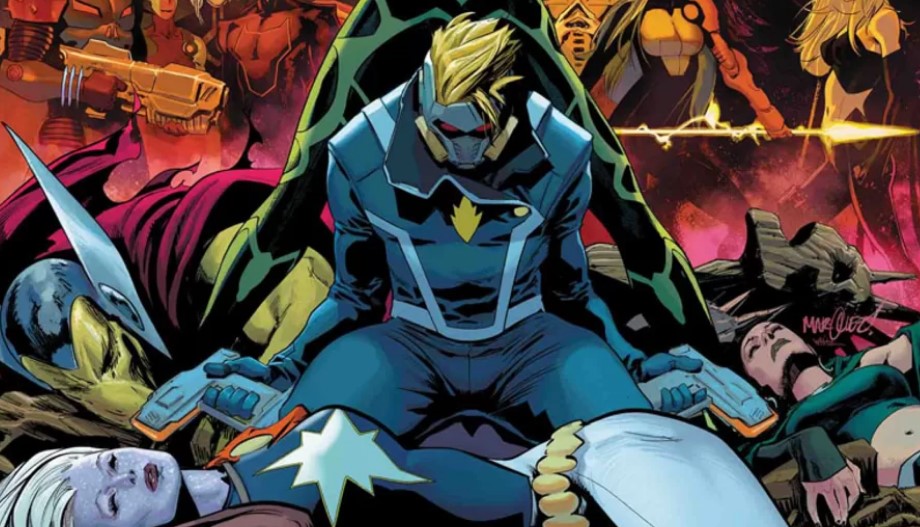 As an aside, I’m very pleased to see that NINO is relegated to a very poor selling teen team book and not considered part of the Corps! This is as it should be. Children don’t belong in military or para-military forces. I was a big fan of the original Champions 1970’s book and the original New Warriors books, but I boycotted the new iterations of both when NINO became part of the teams. NINO’s Champions is another one of those poor selling concepts that Marvel keeps on life support for some reason when they cancel other better-selling books with substantially more merit (Agents of Atlas; Young Allies; etc.). Whatevs. As long as I don’t have to see the annoying little bastard in any true Cosmic book, I’m happy.

I’m tentatively optimistic. Today’s Marvel Cosmic is not where it was at its most recent high point, the DnA years, but it’s certainly the best it’s been since the close of the DnA years. I hope Marvel’s current leadership with take to heart the failures of Marvel Cosmic during the interim and build us a new era of Marvel Cosmic that we can all enjoy.

So, in closing, I say, “Cry Havoc! And let loose the internet trolls to attempt (you won’t succeed) to grievously insult me for expressing an opinion!”