It has come to my attention on Twitter that some fans are claiming a conspiracy exists between Disney and Fandango regarding ticket sales for Captain Marvel.

Fans are claiming that they are only able to purchase tickets on Fandango next weekend for Captain Marvel and no other movie.

That latter claim is true, and I checked it myself. Currently, only Captain Marvel tickets are available to be purchased next weekend on Fandango, but every other movie is greyed out and not available.

Regarding the question of a conspiracy between Disney and Fandango (the president of Fandango did work for Disney) regarding ticket sales, the claim appears to be false.

The simple reason why Captain Marvel is currently the only film available to purchase tickets for next weekend is that local movie theaters have yet to turn in their schedule for the other films that will be playing next weekend.

As Captain Marvel is a new release, it already has a guaranteed set number of screens it will be shown on, but the other movies, the ones previously released, have to get manually scheduled by theaters, and they in turn hand in the schedule to Fandango, which gets updated the Monday or Tuesday prior to the weekend. 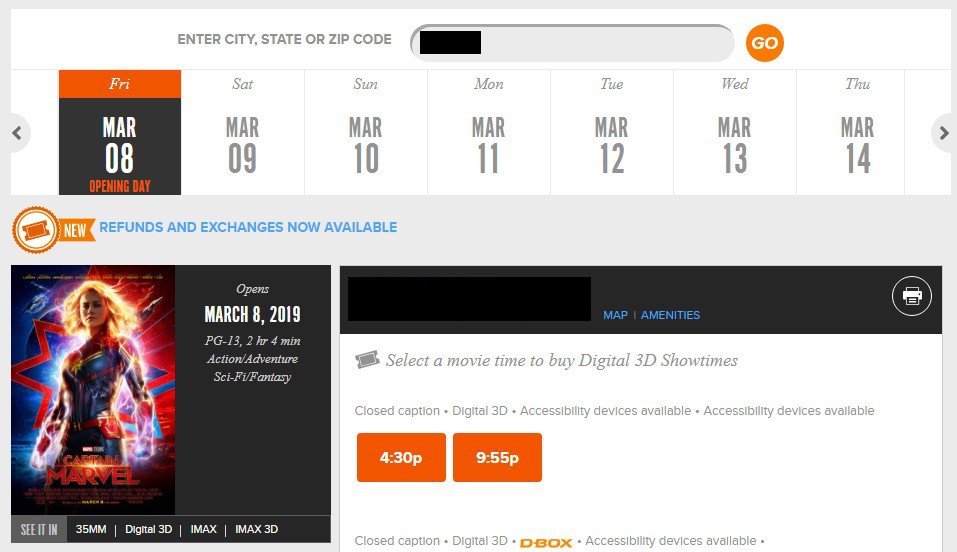 So for example, checking Fandango, only tickets for Captain Marvel can be purchased next Friday (Mar. 8), with Alita: Battle Angel currently not available and greyed out. The reason is that local theaters have yet to schedule how many screenings and at what times Alita: Battle Angel will take place, which is why nothing is available for the flick next weekend on Fandango. The local theater will figure out the timeslots for Alita (and the other films) and then send the info to Fandango. I also checked the ATOM Tickets app and it is the same.

Update: Fandango has now changed how they list movies with no available tickets as instead of a greyed-out box, the date is shown with it stated, “No Movie Times Check Back.”

So there isn’t any conspiracy and everything should be updated next week.

Update: Tues. 3/5: Fandango has been updated with the new screen times for all the movies.

Thanks to Odin’s Movie Blog on Twitter and in the following video for the explanations. Captain Marvel opens March 8.