The Ms. Marvel season finale aired on Disney Plus tonight which was full of big surprises as well as lots of cosmic cringe.

I’ll say overall I found the series really, really boring as it comes off more as a family sitcom than anything remotely comic book or superhero related.

It’s obvious Marvel first came up with the politically slanted story and then added in the superhero stuff, and it really didn’t work.

To be honest, I actually didn’t mind all the family stuff and liked the conservative approach where they are a tight-knit family who actually gets along and really love each other and it was also nice to see how the Mosque community comes together, but there were problems with the writing. 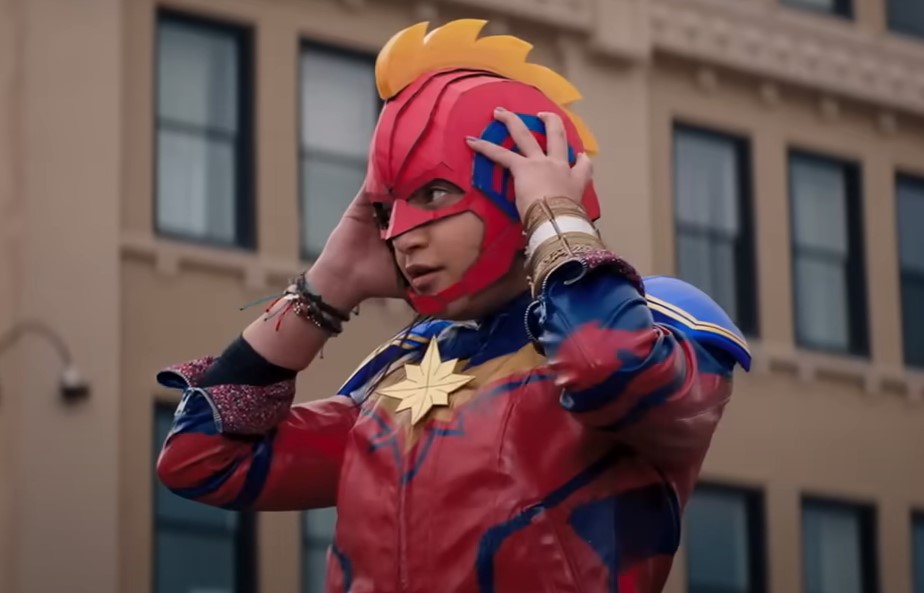 Ms. Marvel as a teenage superhero makes no sense

My biggest gripe and this is something Timelord came up with when Marvel killed off Richard Rider Nova and replaced him with a teenage woke version, is that who in their right mind would allow a teenager to have super powers? Powers that are akin to a weapon of mass destruction, which would in essence make the teenager a child soldier?

Characters like how Ms. Marvel is depicted in the TV show, as well as the Sam Alexander Nova and Riri Williams Ironheart from the comics, have NO powers. They get their powers from some sort of device. You wouldn’t give a kid the passcodes for nuclear weapons, would you? It’s bad, careless, and lazy writing for the sake of a politically correct agenda. What often happens is to make those woke characters work, everything about the original character has to be changed, and it makes for a terrible story.

What about Spider-Man, you ask? Spider-Man has inherent powers – you can’t turn them off, take them away, or take said device off – so Spider-Man as a teen chooses to be a superhero. If he is going to be a superhero no matter what, the responsible thing to do would be to make him the safest possible, which could explain why Tony Stark took the young Peter Parker under his wing in the MCU (recall how in Captain America: Civil War, the Russos specifically had Tony say that Spider-Man was supposed to only take Cap’s shield and stay out of the way; so the Russos get it, and it’s probably from reading our stuff as we’ve been at this for 14 years). For the same reason, I also can’t stand Robin or any of the characters Batman raises in DC, as it makes zero sense, and just as we saw with Jason Todd, that proves my point — if Batman never had Robin, Robin would never be in danger. Why would a responsible adult ever put a kid in danger? 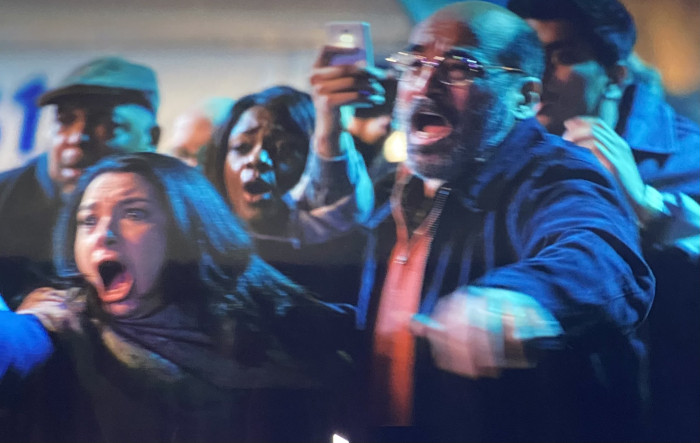 Getting back to Ms. Marvel and the bad writing, so Kamala’s mom apparently makes her that new suit, which looked pretty good, and actually signs off on her teenage daughter going out and potentially getting killed while in previous episodes wouldn’t let her daughter do anything? Huh? Then later on in the big fight scene finale, you see her and Kamala’s dad’s reaction to their daughter nearly getting killed? And then cheering on for her again after that? I mean, her parents should be charged with endangering the welfare of a minor. Ditto for Grandma. They could simply take away and take off the bracelet, and Kamala would have no powers and would not be in danger.

Which leads me to the big revelation… Wait, before that, what was up with Kamala getting the embiggen powers? How did she even know to say embiggen (Shazam!) in the first place? I thought it looked absolutely ridiculous. Who needs Reed Richards now? 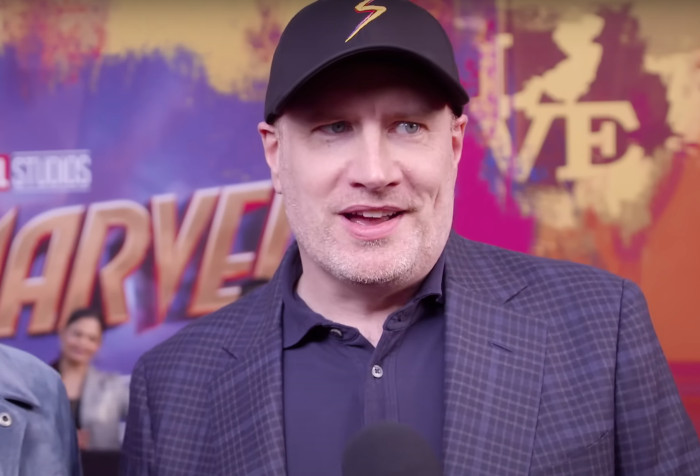 Regarding the big revelation, so Kamala is actually a mutant as the X-Men animated series song played as she was told she has a mutation (the use of the song is confirmed in the credits and it’s listed as the X-Men ’97 song)? Oh, boy. Of course, Namor couldn’t be the first mutant or the X-Men and it has to be Kamala Khan. Who also wants to bet Feige is going to overdo the X-Men music to death for the MCU? Twice now, already. Also, so she’s a mutant and from another dimension and needs a magic bracelet to use her powers???

I also found it hilarious that both Kamala and Kamran have crystal-based powers, as in the comics, Ms. Marvel is an Inhuman, and the Terrigen Crystals are what the Inhumans use to unleash their powers. So is Kamran also a mutant [shrugs]?

History lesson: When Kamala Khan was first created for the comics as part of the woke Marvel NOW! initiative that replaced all the original characters and was massively unsuccessful, she was made to be an Inhuman, and that was at the time when the then-head of Marvel, Ike Perlmutter, was feuding with Fox Studios because Fox owned the rights to the X-Men. So you know what Perlmutter did? He basically killed off the X-Men in the comics and replaced them with the Inhumans because he was so bitter (Wolverine was canceled and killed off, etc.).

So Perlmutter also was in charge of Marvel TV (separate from Feige and Marvel Studios) who was responsible for the Marvel Netflix shows, and way back, an Inhumans movie was supposed to be made for Feige’s MCU. However, Perlmutter and Feige hate each other, so the Inhumans movie never got made, but instead, Marvel TV and IMAX came to a deal to release that awful Inhumans series in IMAX theaters and on ABC. Eventually, Feige would go above Perlmutter at Disney and be made in charge of all of Marvel, which in hindsight, doesn’t look to be any good nor a good decision judging from Phase 4 and how bad the comics and video games are now. At least Perlmutter and his crew liked the comics and knew a good storyline when they saw it for the most part (debatable).

So instead of following the comics, we see that Feige – probably out of spite (included Anson Mount in DS2) – now makes Ms. Marvel the first known mutant of the MCU (I’ll never refer to the MCU as 616 as that is the Marvel Comics universe). 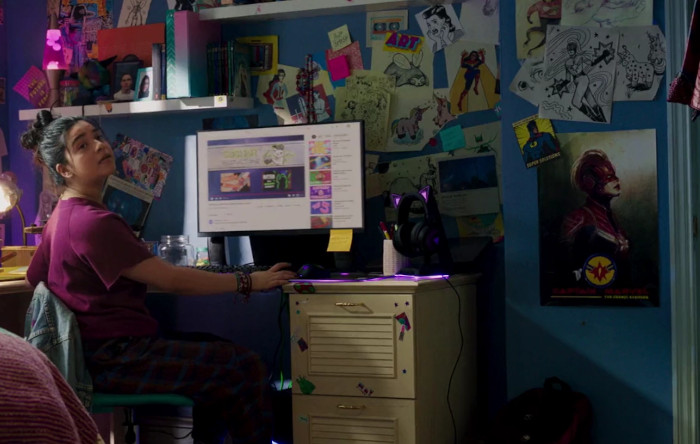 How about that post-credit scene that no one saw coming?

Notice how Carol Danvers comes out of the closet? What’s that about?

It’s also definitely Carol Danvers (confirmed), and Kamala is not shapeshifting into her idol, as clearly Carol wasn’t aware of her surroundings and was surprised to be in the room and on Earth. Carol also happens to sport a new costume and just like in the Shang-Chi post-credit scene, she has the new magic power of being able to grow her hair out.

I think what is going on is that it’s similar to the original Captain Marvel from the comics where Mar-vell and Rick Jones would switch bodies using the Nega-Bands, but Feige is doing another bastardized approach for the MCU (just like he did with the Captain Marvel movie – my review explains it all). It appears that Kamala might have one of the Nega-Bands and that somewhere in space, Carol finds the other or another, and when Carol activates it, she switches places with Kamala on Earth, which obviously explains how Kamala gets involved in The Marvels movie. But again, since the bracelets can be taken off, why not remove the band from Kamala (oh yeah, because she is now in space and it has to protect her)?

I’ve said it before, I think for Ms. Marvel they should have made the bracelet irremovable, which actually is something like the Wendell Vaughn Quasar quantum-bands, which have similar powers to Ms. Marvel in the MCU. Actually, in the latest comics, Quasar switches with another woke version, so maybe Feige is actually using the quantum-bands for Ms. Marvel, which wouldn’t at all be a surprise; however, James Gunn may be going with the woke Quasar for Guardians of the Galaxy 3, so look for more there (possibly all related in the MCU).

#MsMarvel OH MY GOD CAROL DANVERS I CANNOT BELIEVE IT MY QUEENIE pic.twitter.com/wQ3FvYhJ6U 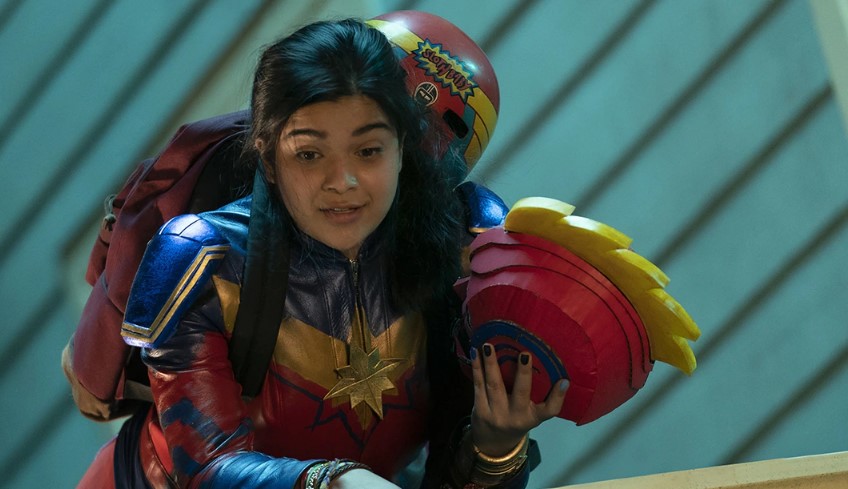 I think the major problem with Marvel now is those in charge have lost touch with the comic books and the fans and source material, as it seems to me whoever is working on these new movies and TV shows is not a fan of comic books or superheroes, but they are using these characters to tell their own said story.

I also think that similar to Kathleen Kennedy and Lucasfilm, Marvel and Feige in their arrogance think they can throw whatever they want at fans and that they think fans owe them and will accept whatever garbage is thrown in their direction, but just like Disney Star Wars, it’s not working out. They owe the fans, not vice versa.

Overall, Ms. Marvel fails to deliver: The forced Pakistan and political dialogue and scenes should have been cut, the superhero stuff comes off rather boring and lame and should have been expanded upon, but I’ll again say the family stuff was alright (the dad naming Ms. Marvel was a nice touch) and the music was pretty cool and I felt the production was of better quality than say compared to Hawkeye and The Falcon and the Winter Soldier and the acting was decent, so I give Ms. Marvel around a 5 or 6 out of 10. I’d just like better quality writing.