Huge Weaving will not be returning for The Matrix 4 as Agent Smith, the nemesis of Neo from the original trilogy.

Weaving offers that he did talk with director Lana Wachowski about a possible return, but due to a schedule conflict, unfortunately, can’t do The Matrix 4 (via Time Out).

‘“The Matrix” is a very different story. It’s unfortunate but actually I had this offer [for “The Visit”] and then the offer came from “The Matrix”, so I knew it was happening but I didn’t have dates. I thought [I] could do both and it took eight weeks to work out that the dates would work – I held off on accepting [a role in “The Visit” during that time]. I was in touch with [director] Lana Wachowski, but in the end she decided that the dates weren’t going to work. So we’d sorted the dates and then she sort of changed her mind. They’re pushing on ahead without me.’

We see that Weaving says Lana Wachowski changed her mind, so that may mean Agent Smith might not appear in The Matrix 4, or of course, another possibiliy is that the role could be recast; however, Weaving played a rather iconic role with Smith, so it would be hard to see another actor playing the part. 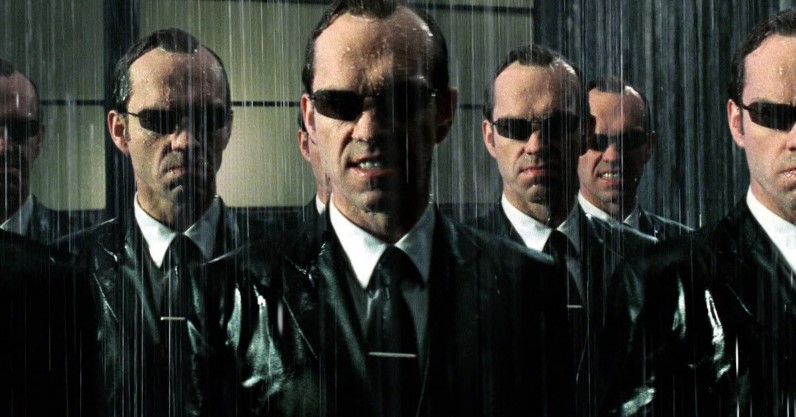 Huge Weaving played a program, an Agent of The Matrix in the first film, where he was seemingly destroyed by Neo at the end of the movie; however, Weaving returned in the subsequent sequels as a virus.

A video game released in 2005 also featured the final boss of “MegaSmith,” who was made up of destroyed buildings, cars and parts of the road, with the “spectator Smiths” standing around the crater and in the streets acting as the MegaSmith’s muscles, resulting in Smith not only becoming the city’s people, but the city itself.

Details for The Matrix 4 include that Keanu Reeves will be back as Neo, Carrie-Anne Moss returns as Trinity, Jada Pinkett Smith returns as Niobe, with newcomers for the film including Neil Patrick Harris, Aquaman Black Manta villain Yahya Abdul-Mateen II (rumored to be playing young Morpheus), Jessica Henwick is said to be playing a female-like Neo character at the forefront of the movie, and recently saw the casting news of Jonathan Groff, star of Netflix’s Mindhunter, and Toby Onwumere, known for Sense8, joining the film.

The Matrix 4 is described by Warner Bros. as an “all-new film, returning audiences to the reality-bending universe.”

The Matrix 4 has a May 21, 2021 release date, the same release date as John Wick 4 starring Keanu Reeves.