Fans will get their first chance to play the new Marvel's Avengers video game when BETA launches in August.

"Mark your calendars for our second Marvel’s Avengers WAR TABLE, & to play as Earth’s Mightiest Heroes during our August BETA Weekends! Tune in on July 29 for an extensive look at BETA content, and perhaps a surprise…or two?" tweeted the official Twitter account.

The tweet includes a graphic featuring a look at The Avengers from the game where it's noted that:

Find the official announcement below about BETA and the War Table.

Mark your calendars for our second Marvel’s Avengers WAR TABLE, & to play as Earth’s Mightiest Heroes during our August BETA Weekends! Tune in on July 29 for an extensive look at BETA content, and perhaps a surprise…or two? #Reassemble #EmbraceYourPowers pic.twitter.com/EC4XlQFFdL 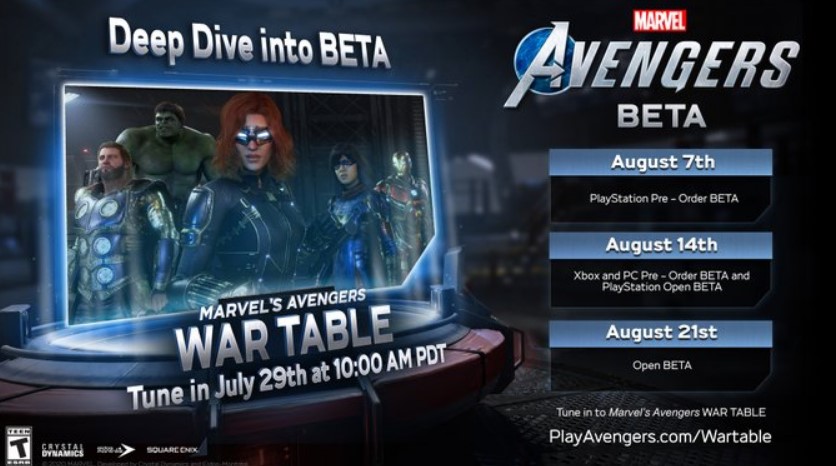 Marvel's Avengers will be available on PS5

If you plan on purchasing a PS4 this Holiday Season, worry not as it has been announced if you buy Marvel's Avengers for the PS4, you can upgrade to PS5 for free.

So that way, you can play the BETA and the game when it first becomes available in August and September, and then when you get your PS5 this Holiday Season, you don't have to worry about purchasing the game a second time, as the PS5 version will be free for those who purchased a PS4 version.

Marvel's Avengers will be available for the Windows, PlayStation 4, Xbox One, and Stadia on September 4, 2020.

Four trailers have also been released featuring gameplay footage; check out the MODOK trailer below.

LOS ANGELES (July 15, 2020) - Today, SQUARE ENIX® announced that the next Marvel’s Avengers War Table digital stream will premiere on July 29 at 10:00am PDT and will provide an exclusive in-depth look at the Marvel’s Avengers beta program, which begins on August 7.

Fans can watch via the PlayAvengers.com channel.

The Marvel’s Avengers War Table offers a world-premiere look at new trailers and information about the upcoming Super Hero game. The first digital stream debuted on June 24 and included a reveal of new Thor gameplay, details on the game’s central villain, MODOK (Mental Organism Designed Only for Killing), and brand-new information about War Zones, the game’s team-based missions, including their structure and how the Avengers become even more powerful when working together.

On July 29, the second Marvel’s Avengers War Table will give the most complete look to date at what players can expect from the game’s upcoming beta program, which launches August 7. Fans can anticipate several exclusive new videos that will dive deep into the content that will be included in the beta, as well as insight about the design and creation of Marvel’s Avengers. Attentive viewers may also spot hidden details inserted to whet their appetite for future content and announcements.

ABOUT THE MARVEL’S AVENGERS BETA PROGRAM

The beta for those who pre-ordered Marvel’s Avengers on Xbox One and PC will begin on August 14 and will run until August 16.

Finally, on August 21, the beta program will be open to all PlayStation 4, Xbox One, and PC players and run through August 23.

A Square Enix Members account will be required to play the beta. Players can sign up for the account for free at square-enix.com/register. Everyone who signs up for an account will receive a Thor in-game nameplate in the final game.

Players in Marvel’s Avengers will also be able to customize Earth’s Mightiest Heroes in a number of ways. While each Super Hero will play true to their unique power sets, each will have the flexibility to play differently based on the gear you equip them with and the skills you enable, so no two player’s heroes will play in exactly the same way. Each hero has dynamic combo systems, Heroic moves, an intrinsic ability, and signature move sets to unlock and customize – many inspired by classic moves from the 80 years of Marvel history in all media, others crafted as originals just for this game.

Players also customize these iconic Super Heroes with classic, fan-favorite, and all-new original outfits inspired by over 80-years of Marvel history, including Iron Man’s suit from the 2014 Original Sin storyline, or Thor’s Donald Blake identity, which is a nod to an alias of Thor’s who first appeared in 1962’s Journey into Mystery issue 83.

Marvel’s Avengers is an ambitious game, starting with a global high-stakes race to rebuild the Avengers. But that’s just the beginning. To ensure a continuing heroic experience for all players, the narrative of Marvel’s Avengers expands, and threats escalate with each new post-release Super Hero, region and story arc delivered to players at no additional cost once they own the core game.

Marvel’s Avengers will release simultaneously for the PlayStation 4, Xbox One, Stadia, and PC on September 4, 2020. Marvel’s Avengers will be available on PlayStation®5 and Xbox Series X when the consoles launch in Holiday 2020. Players who own the current-gen version of the game will be able to upgrade to the next-gen version at no additional cost, regardless if players are moving from PlayStation® 4 to PlayStation 5 or Xbox One to Xbox Series X. Those moving their saves to next-gen will transfer their player profiles and progression so they can pick up right where they left off. In addition, cross-gen play will be supported so PS5™ players will be able to play with their friends on PS4™ and Xbox Series X players will be connected with their friends on Xbox One.

The game is currently rated T (Teen) by the ESRB.