Before I go further, this doesn’t come as a surprise to me as years ago comic book fans bumped heads with the writer on the defunct Comic Book Resources message boards where Slott and former Marvel Comics editor Stephen Wacker would constantly harass fans, then, magically, the boards were shut down and relaunched.

Slott has also blocked and unblocked me a few times on Twitter for simply calling his childish and foolish behavior out, particularly in regards to his tweets about Batman vs. Superman.

I’ve since returned the favor and refuse to ever buy anything Dan Slott is involved with ever again and rarely cover his goofy and nonsensical tweets or even his comics.

The latest sees Slott throwing a hairy conniption about the coronavirus in which he blames Donald Trump and curses at Trump supporters (in a now-deleted tweet):

This administration is NOT on top of this emergency.

They’re ignoring or contradicting their OWN experts.

And he’s golfing at his resort AGAIN and profiting off it.

I’m NOT saying f*ck you for voting for him.

I AM saying f*ck you if you vote for him AGAIN.

I believe more people die from the regular flu, heart disease (something Slott should probably be more concerned about than the coronavirus), cancer, and suicide on a daily basis, yet, for some reason, Slott isn’t tweeting about that or blaming Trump or his supporters…

Slott even went so far as to say that the coronavirus is the best friend to Trump and his supporters: 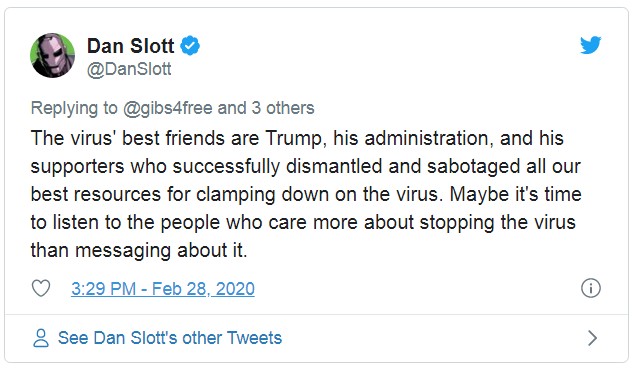 Now it’s fine that Slott can voice his opinion on Twitter and rightfully deserves to do so, but why he is in the wrong is because he is telling Trump supporters to f— off, people that more than likely pay good money for his comics and don’t pirate them like the SJW fans do who have no money.

A retailer responded to Slott’s tweet voicing his frustration that sees the Marvel Comics writer insult paying fans amid an industry that is already crumbling:

Oh hey @Marvel. Not swearing at 51% of your customers might make selling the books at retail bit easier. Just a thought. Thanks!

@Marvel Spider-Man, Iron Man, writer Dan Slott posted on twitter Eff you to everybody that voted for Trump. It doesn’t help anybody. Might buy him favor with his boss, but retail needs to be inviting to everybody.

*shrug* I don’t meet a lot of people that want to talk politics when buying comics. Most come see me to escape real world tedium. I try to be everybody’s happy place.