The trolls are out in full force in response to me pointing how the woke Hawkeye series on Disney Plus is completely tanking -- so much so that it has lost 200k viewers within five days from its first to second episode.

At first, I thought the trolls were simply defending one of their favorite Marvel characters which I can relate to - Kate Bishop - but upon doing some investigating, it seems they're just a bunch of MCU shills as they know nothing about the character (who was never all that popular or a big seller in the comics to begin with, much like Captain Marvel and Ms. Marvel).

My Twitter feed has been lit up in response to my Hawkeye article going viral, where "fans" tweeted at me that Kate Bishop isn't woke and lambasted me for stating she wasn't shown to have trained in anything, only that we were told she was (bad storytelling). Admittedly, I never read any of her comics, and I'm not even a Hawkeye fan to begin with as I find the character boring. Bows and arrows and no superpowers? Really? And able to fight Ultron bots? Cue the J.K. Simmons J. Jonah Jameson meme.

But doing a bit of homework, I can say Kate Bishop is definitely woke, and I also found out something interesting in regards to the Hawkeye series not showing Kate Bishop training (they did for Echo for some reason) in that Kevin Feige ditched a HUGE part of Kate Bishop's origin story which I think takes a lot away from the character and what makes her who she is. 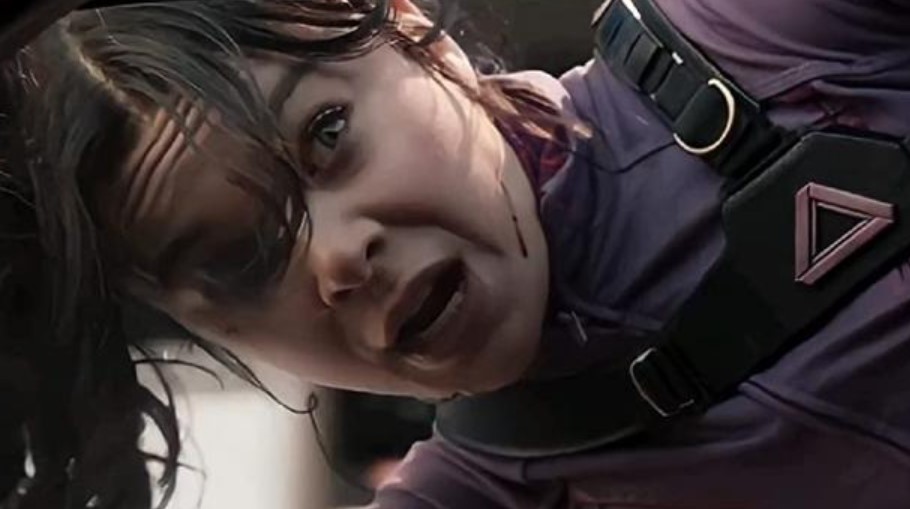 Before we get into what Kevin Feige omitted and dumbed down for his zombie MCU audience who, like a zombie, munches on anything Feige throws at them even if it's a turd wrapped in glitter (Phase 4), check out official descriptions for the comics, which in regards to being woke, as I have explained many times in the past, is when an original character (usually a white male) is replaced and made out to look bad as the politically correct agenda is pushed at the expense of that original character.

Sure "woke" wasn't a term back then, but things were still motivated by political correctness, otherwise, why didn't Marvel create new original characters, but of course Marvel didn't and they replaced a bunch of fan-favorites (Quasar, Nova, Captain Marvel, Ms. Marvel, etc) which eventually led to more popular characters getting replaced, and is something that "coincidentally" fits in with Feige's woke MCU.

Kate Bishop is a better version of Hawkeye

This description says Kate Bishop is a better version of Hawkeye (also recall Renner told Bishop she's the "bestest" in the world; after what? being with her for only a couple hours?):

Remember Hawkeye? No not that Hawkeye, our favorite Hawkeye, the chick who puts the hawk in Hawkeye, the butt-kicking hero who had to save the other Hawkeye's butt all the time. Yup, you know her, it's the dazzling Kate Bishop making her solo comics debut! Kate is heading west and returning to Los Angeles, with her bow and arrow and P.I. badge in tow. There are crimes to solve and she's the best archer to handle ‘em! The City of Angels has a new guardian angel. The talented duo of Kelly Thompson (A-Force, Jem) and Leonardo Romero (Squadron Supreme, Doctor Strange) bring you a Kate Bishop like you've never seen her before, in a brand-new ongoing series that really hits the mark!

And this one, of course, makes the police out to look bad as well which was way ahead of its time in 2014:

Kate Bishop heads to Los Angeles to get away from New York, life and Clint Barton - but she can't escape trouble! Because Madame Masque is hanging out poolside with the rich and famous, as well! As Kate helps a reclusive and sixties-damaged pop-music genius find his lost masterpiece, Madame Masque finds Kate. By which we mean starts trying to kill her again. This one has it all! Characters! Plot! Story! Dialogue! Theme! Meaning! Message! Action! A little exposition! Fire! Arrows! Criminals! Neighbors! Large bodies of water! Clients! Cops who don't care! A system that victimizes the victims! The dog! In a broken town where cynicism and apathy has its claws around the throat of the good and decent, Lady Hawkguy is the only hero you can trust! Collecting HAWKEYE (2012) #14, #16, 18, #20 and ANNUAL #1. 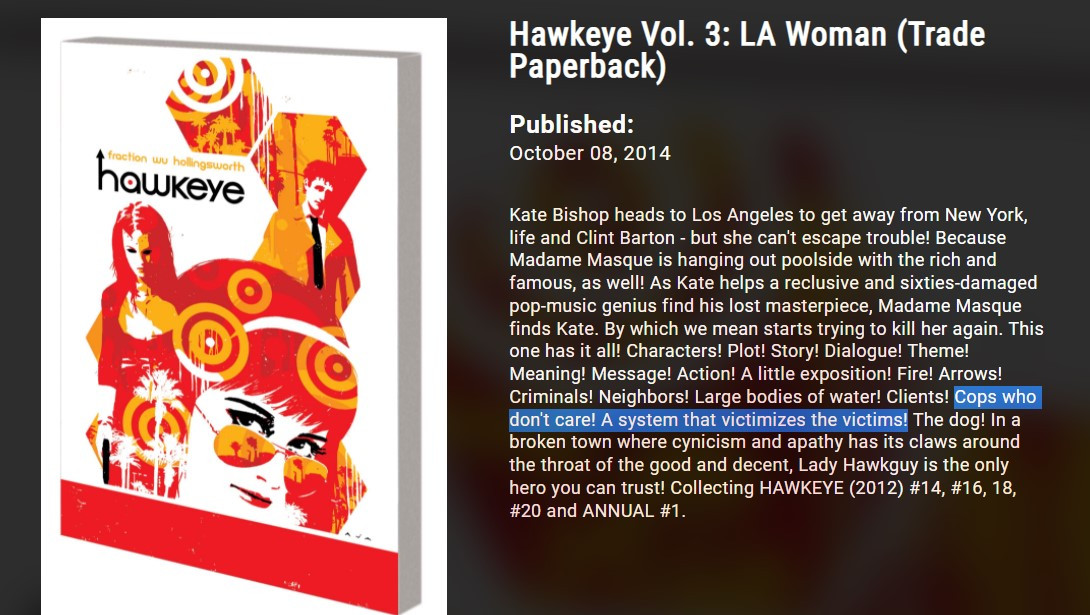 I also went through some pages where it seems, Kate's friends are a bunch of SJWs (unless she's the POC version of She-Hulk): 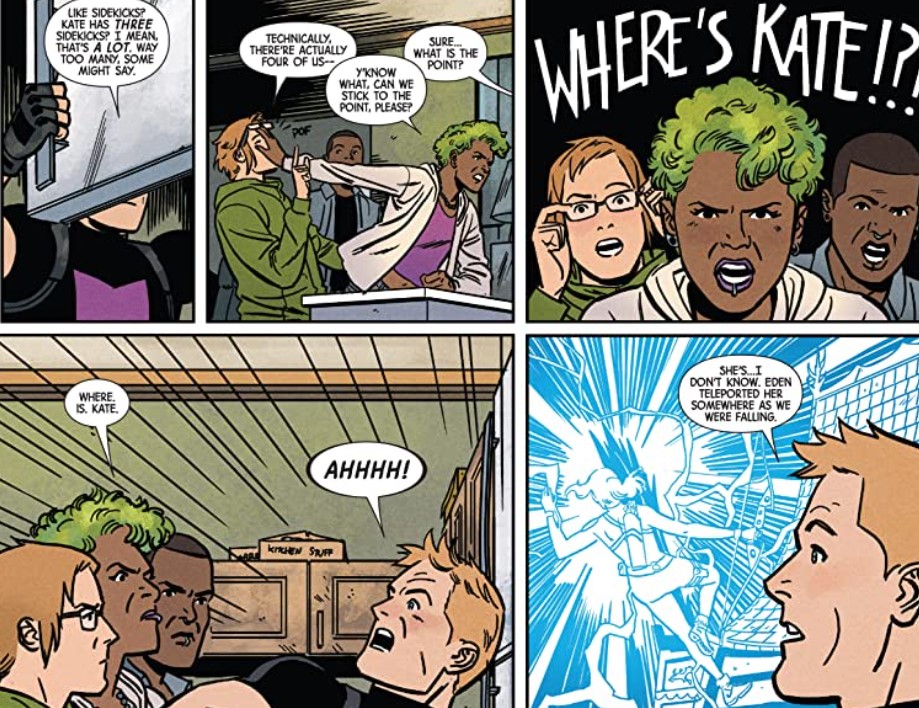 Speaking of SJWs, the most recent comic that Marvel Comics published in coordination with the release of the Hawkeye series on Disney Plus also happens to be written by a big-time SJW, self-proclaimed "civil servant" Dutch New York Times bestselling author Marieke Nijkamp, who wrote a fictional kids book about a shooting in a high school in Alabama, where get this -- even though she is not from the United States and never visited Alabama, she received tips from kids about how she can't write if it snows during the school shooting because the kids would be off from school, which of course would mean the school shooting couldn't happen (duh). And her next book is about some bi-polar kids in Alaska where, you guessed it, she's never been to Alaska. At least she is allowed to write that it snows there. 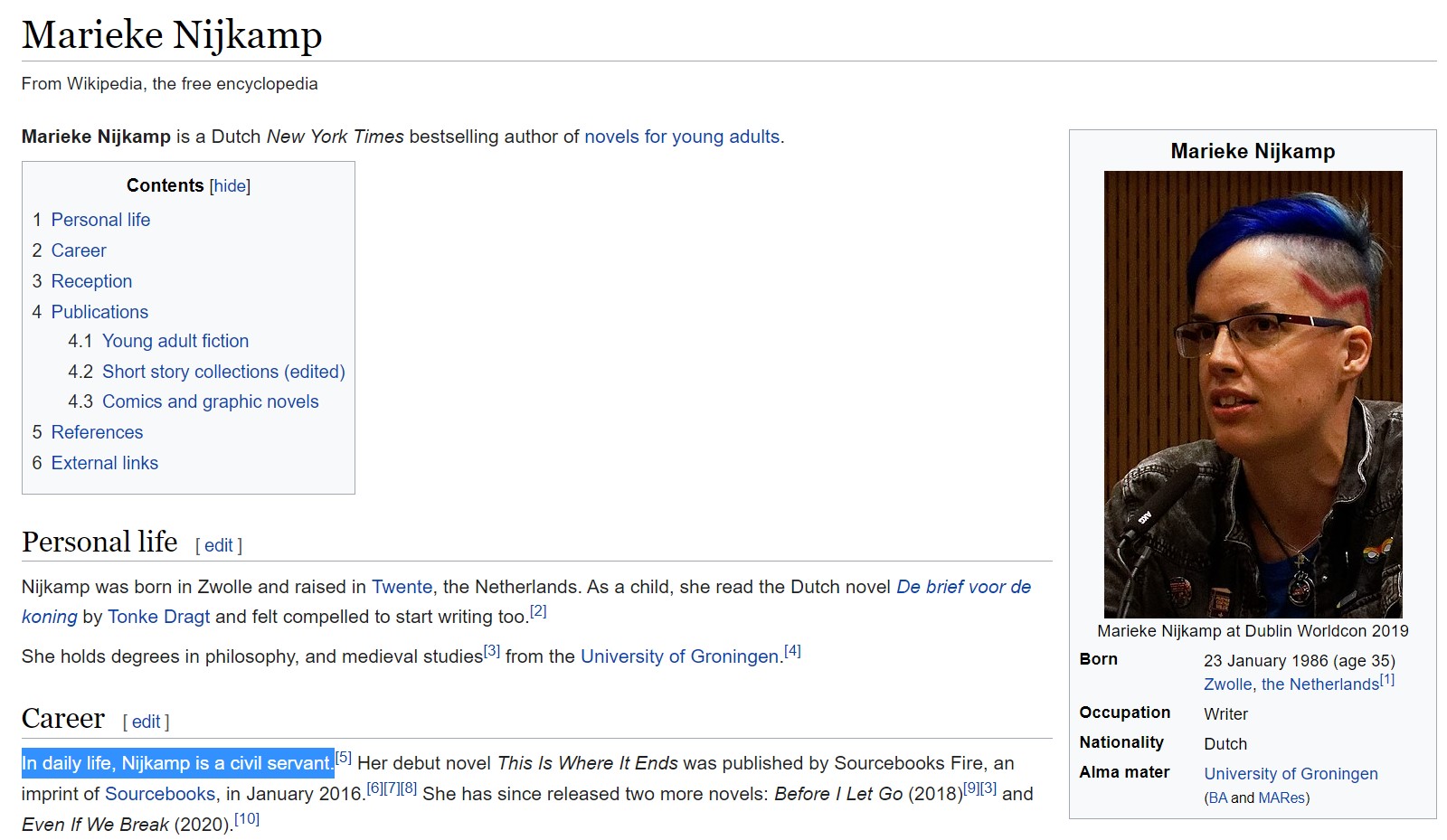 Now on to Kevin Feige.

While I was questioning in my article and on Twitter why Kate Bishop wasn't shown to be trained, which is just like Mary Sue Rey in Disney Star Wars, as Bishop is just "magically" the best at everything -- none of the MCU shills on Twitter even mentioned it, but I discovered the real reason why Kate Bishop takes up martial arts.

No, it's not because she idolizes "Hawkeye," it's because she suffered a traumatic event where she was sexually assaulted.

So Kevin Feige arguably nixed the biggest (and most unfortunate) reason why Kate Bishop trains and what makes her who she is and why she fights the way she does and why she's a superhero?

Where's all the outrage?