Henry Cavill talks about his transformation into Geralt of Rivea, the solitary monster hunter, in the Netflix series, The Witcher.

Patrick Stewart asked Cavill questions about The Witcher and Superman as part of Variety's "Actors on Actors" interview series.

While talking about playing Picard, Stewart remarked, "The contrast between the Picard that I had been in Next Generation, and how the years that have passed had changed him. He was now angry, moody, guilty, sad, lonely, which he had never been before."

The remarks saw Cavill reply about playing Geralt, "You almost described my character."

Stewart said he didn’t recognize the Superman actor when he first appeared as Geralt on screen and inquired about whether they were Cavill's ideas regarding the look of the character.

Cavill: The wonders of good camerawork. When it came to the character and how he looks, there are descriptions in the books, and there’s a very popular video game series. I wanted to draw on elements of all of those things. It was about an hour-and-a-half to two-hour process every morning before rehearsals. And by the time I was in my full Geralt rig, as I call it, it was like I was looking at a different person, and I felt halfway to the character just through the physicality. I would move slightly differently, and then as soon as the contact lenses went in, everything shifted. And my interactions were completely different, and the only time they went back to being truly Henry was when I was passed out asleep in a chair in my trailer for 20-minute breaks.

Stewart also brought up the fact that Henry Cavill performed a lot of his own stunts, which saw Cavill mention Tom Cruise who is known for doing his own stunts as well.

Cavill: I did, yes. For me, when it comes to that kind of thing like stunts, I’ve always enjoyed doing the physical stuff. Working with Tom Cruise [on “Mission: Impossible — Fallout”] really helped — or maybe, in the eyes of the producers, made worse my enjoyment for stunts. I really want to do them now, and I think it’s an essential piece to the character. If an audience is watching Geralt on-screen, they must believe that it is me. If it’s not me, I feel like I’ve betrayed the character in some way, and so I try and do as much as a production will let me. 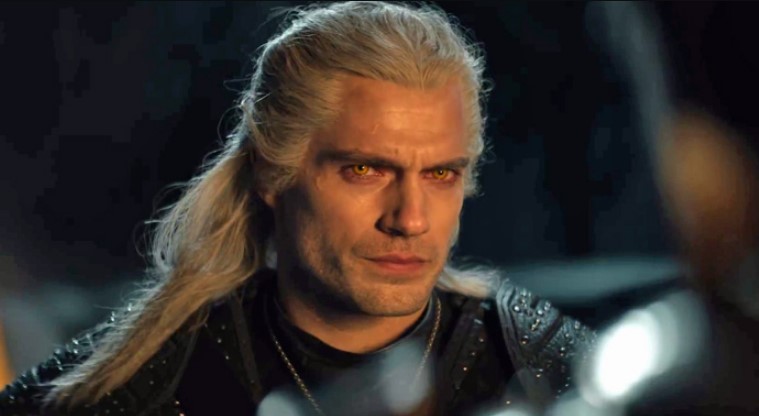 Regarding The Witcher Season 2, it is said to resume filming on Aug. 17 with the second season said to be about the birth of family.

“What I think is really fun about Geralt and Ciri is they are the most unexpected family you can imagine. You have a witcher whose sole job is to kill things for money and you have a little girl who is trying to escape her past and it’s like, how do they come together? And to me, one of the most fun things we get to explore in Season 2 now is how they get to change and shift each other,” showrunner Lauren Hissrich recently told The Wrap. “Coming out of Season 1, you have a pretty good sense of who Ciri is, you have a pretty good sense of who Geralt is. And now we get to throw that all in a blender and see what happens when two people who are completely different have to be forced together in circumstances. And I think it’s really fun. It’s not always pretty. They will argue. They will fight. It will be two strangers coming together for the first time and being told, ‘Nope, you’re gonna be together forever.’ I think that their growth together into being a father and daughter is one of my favorite parts of the series.”