Editor’s Note:  The opinions expressed herein are purely the opinions of the author of this article and do not necessarily reflect the official opinions of CosmicBookNews.  Timelord regularly reviewed the 2007 “Nova” series and the 2008 “Guardians of the Galaxy” series with his reviews directly sent to the books’ editors and creators.  Timelord’s reviews have been quoted by Marvel on cover blurbs, in press reviews, and in solicits.

I’m pleased to report that Ewing’s first story arc with our team is brought to a satisfying and somewhat surprising conclusion. I’ll happily admit that I didn’t see that ending coming. It’s a chancy ending given the current line-up of the team in that it may lose some buyers, but it has potential to help Guardians of the Galaxy recapture the past glory of the DnA/Giffen era if followed-up correctly in future issues – and Athena’s prophecy would seem to suggest that it will be followed-up correctly. I am intrigued by the “transformation” Easter Egg, the references to “The Master of the Sun,” and the new appearance and unique use of the Element Gun in this issue.  Does this mean Ship and the associated Star-Lord powers arising from Ship are in store for the future? I certainly hope so.

Quill’s “transformation” has already begun. For the first time in nearly a decade, we see him behaving as a deliberate, effective, mature, serious, self-sacrificing hero. Refreshing. It’s way past time to be done with the Gunn-Bendis silly, lowest-common-denominator, forgettable, situation comedy approach and back to good, serious, military science-fantasy storytelling with a truly mature, effective lead character. Even Shavrin’s cover art is a partial homage to the Star-Lord iteration of the Giffen era. I also liked Ewing’s use of The Master of the Sun as a homage to the Englehart era and Star-Lord iteration. I may be reading too much into all of this, but I hope Ewing will continue to portray Star-Lord much more like Englehart, Giffen, and DnA portrayed him. Quill’s dealing with Hephaestus is shades of his dealing with other uber-powerful villains of the past and gives me hope for Quill’s future.

I was excited that Drax seemed to have regained his flight, strength, and energy projection powers of yore as well as his classic costume – and thought that he would be used as the powerhouse of the team. But I wouldn’t mind it at all if Hercules also became part of the team as the powerhouse. Like Star-Lord, Hercules has been mangled by writers over the past decade. His last truly great portrayal was in the critically acclaimed but tragically short-lived Incredible Hercules series. While Herc didn’t get much page time, Ewing’s understanding of the character was evident. The touching last few panels featuring Herc and Rocket are powerful evidence of his insight into the character of Hercules.

Speaking of Rocket – Ewing also demonstrated that he understands Rocket at his best. I finally felt like I was finally seeing the real Rocket Raccoon again after a very long absence. Rocket’s ethos and pathos have been elusive to most writers since DnA’s departure with most just parroting the goofy MCU portrayal, but Ewing captured Rocket’s ethos and pathos perfectly in this issue. My hat is off to Ewing. Please stay on this track with Rocket, Sir!

Marvel Boy was tolerable this issue as were Moondragon and Phyla. I understand why Ewing had to take Nova out quickly. If Rich had been in the game, the big ending wouldn’t have been possible as Rich would’ve made an effort to intervene. Nevertheless, Nova was taken down too easily. If Nova is to continue to be part of the team, I hope Ewing takes the time to understand the character better.

As previously mentioned, this new team line-up is chancy. Moondragon and Phyla have never been all that exciting to fans and Marvel Boy is on the annoying side. With Star-Lord out, that leaves Rocket, Groot, Drax, and Gamora as the core team. Yes, it looks like some new characters will be added next issue and solicits talk about a “rogue Nova” coming soon. Are they talking about Rich going mad after this most recent near-fatal injury or will we finally see the Saal loose thread storyline from the DnA era addressed? I hope it is the latter. Will fans embrace this new line-up? It remains to be seen, but I do like it that Ewing is taking chances with under-used cosmic characters and not just pulling in Earth superheroes once again as previous writers were wont to do.

As to the mad Greek Gods, they were a good kick-off for this new series, but I’m not sorry to see them go for a while. I think they were written as too powerful and their motivations for all the mayhem and destruction were never really clear.

I truly enjoyed Cabal’s photo-realistic style for the interior art for this issue. I think that style works best for cosmic. Blee’s colors were very pleasing, perfectly complementing Cabal’s art and making the action pop off the page. I hope Cabal and Blee are permanently assigned to this title.

If Ewing holds steady with the approach we’ve seen in this issue and resists the pressure to descend back into silliness to promote Gunn’s impending Guardians of the Galaxy 3 movie, I will pretty quickly become a major Ewing fan. Marvel is earning my money again with Ewing’s approach, so I’ll be back for another issue next month. Tell your friends to buy this book.  It deserves a chance at a good long run.

Now come visit us in the re-opened Cosmic Book News forums and let us know what you thought about this issue.

Guardians of the Galaxy #2 preview: 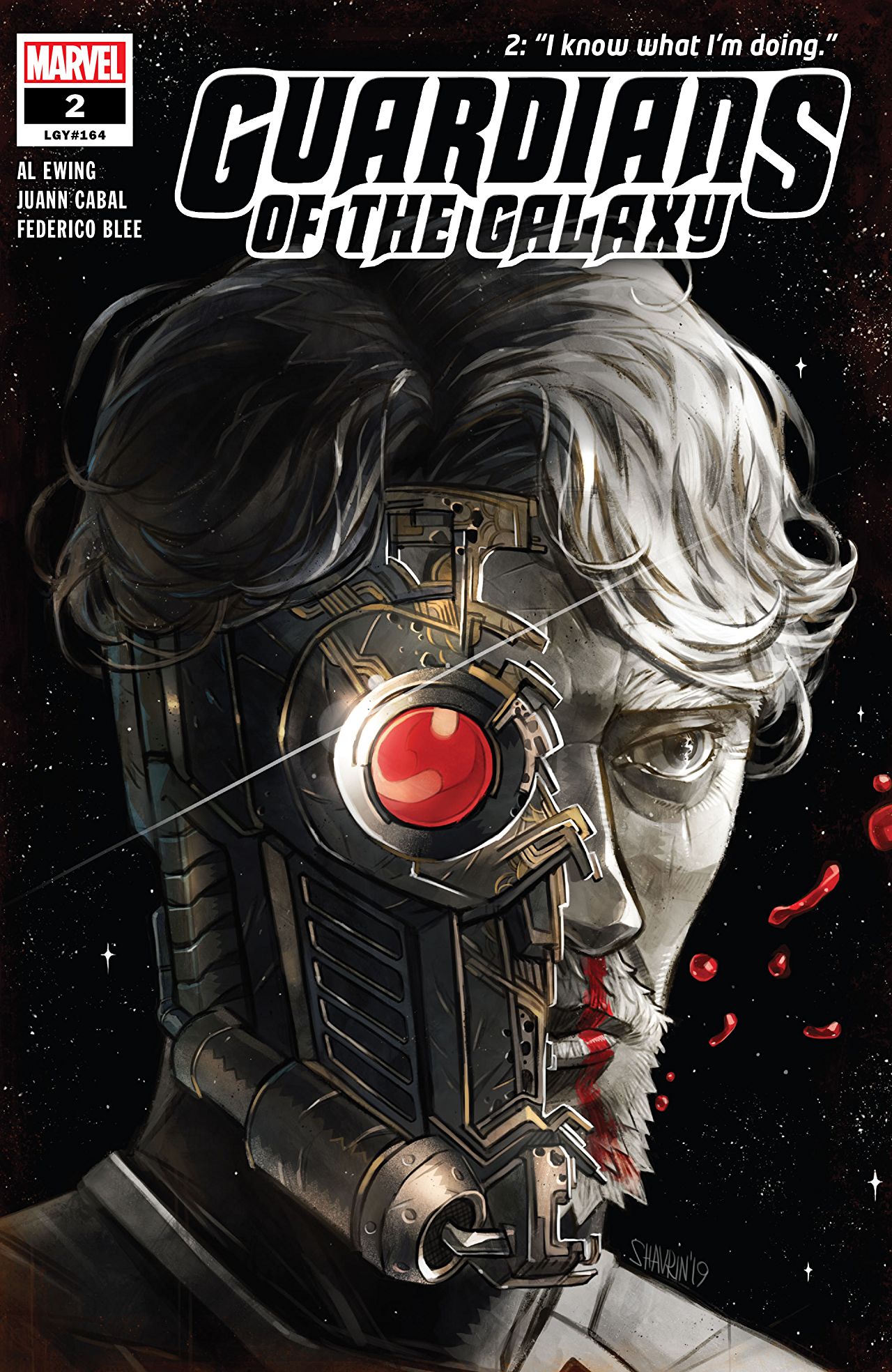 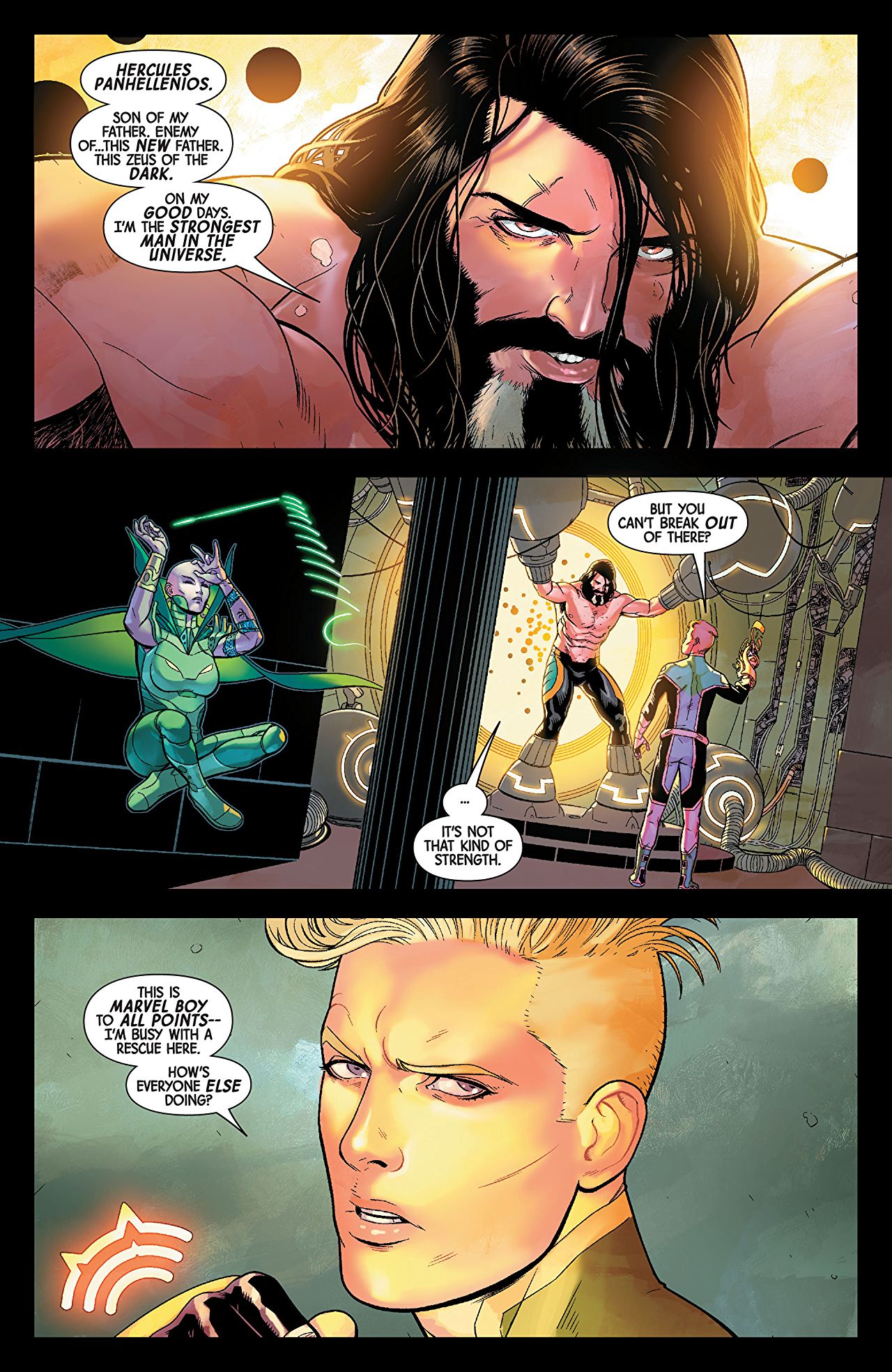 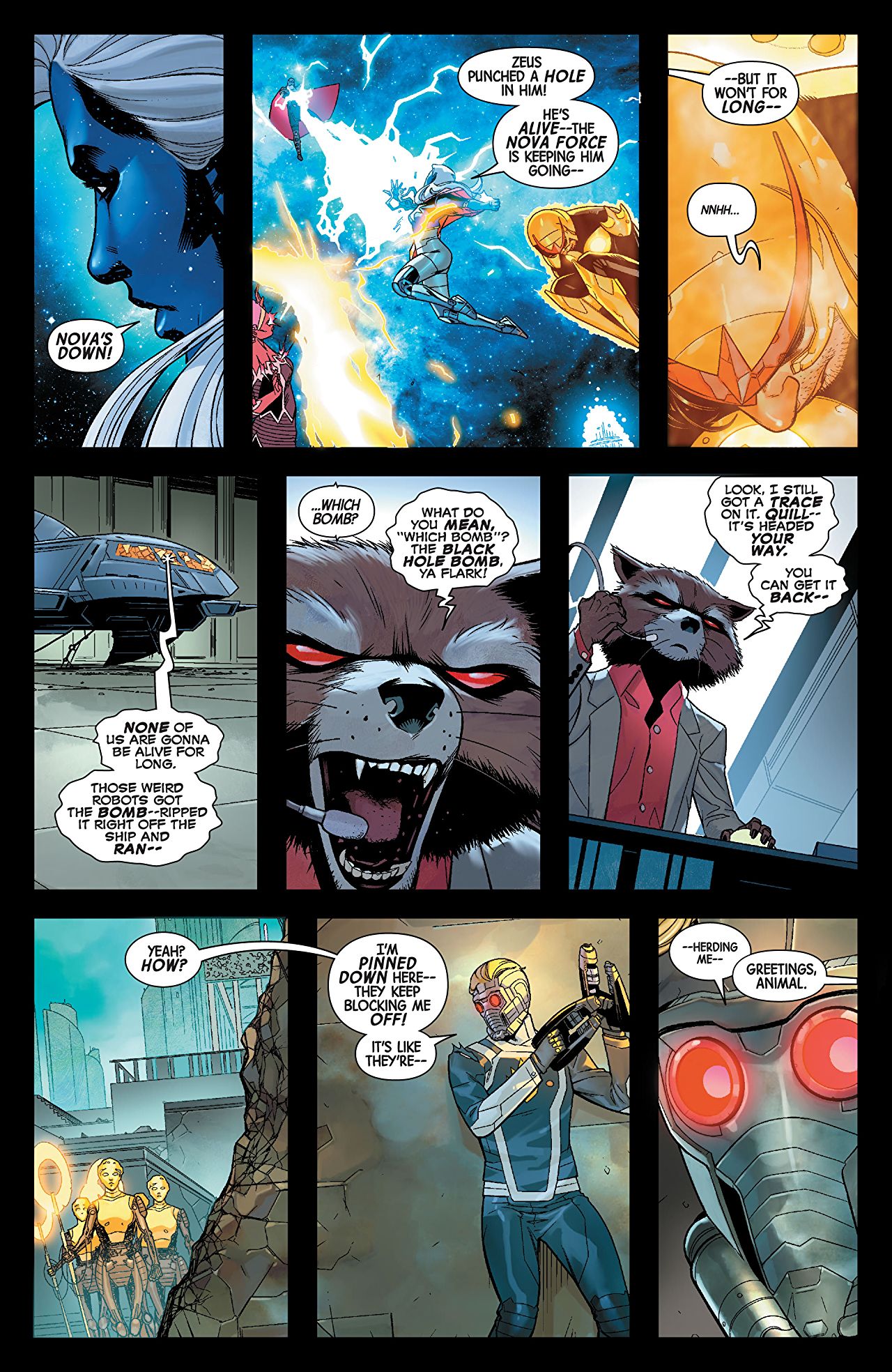 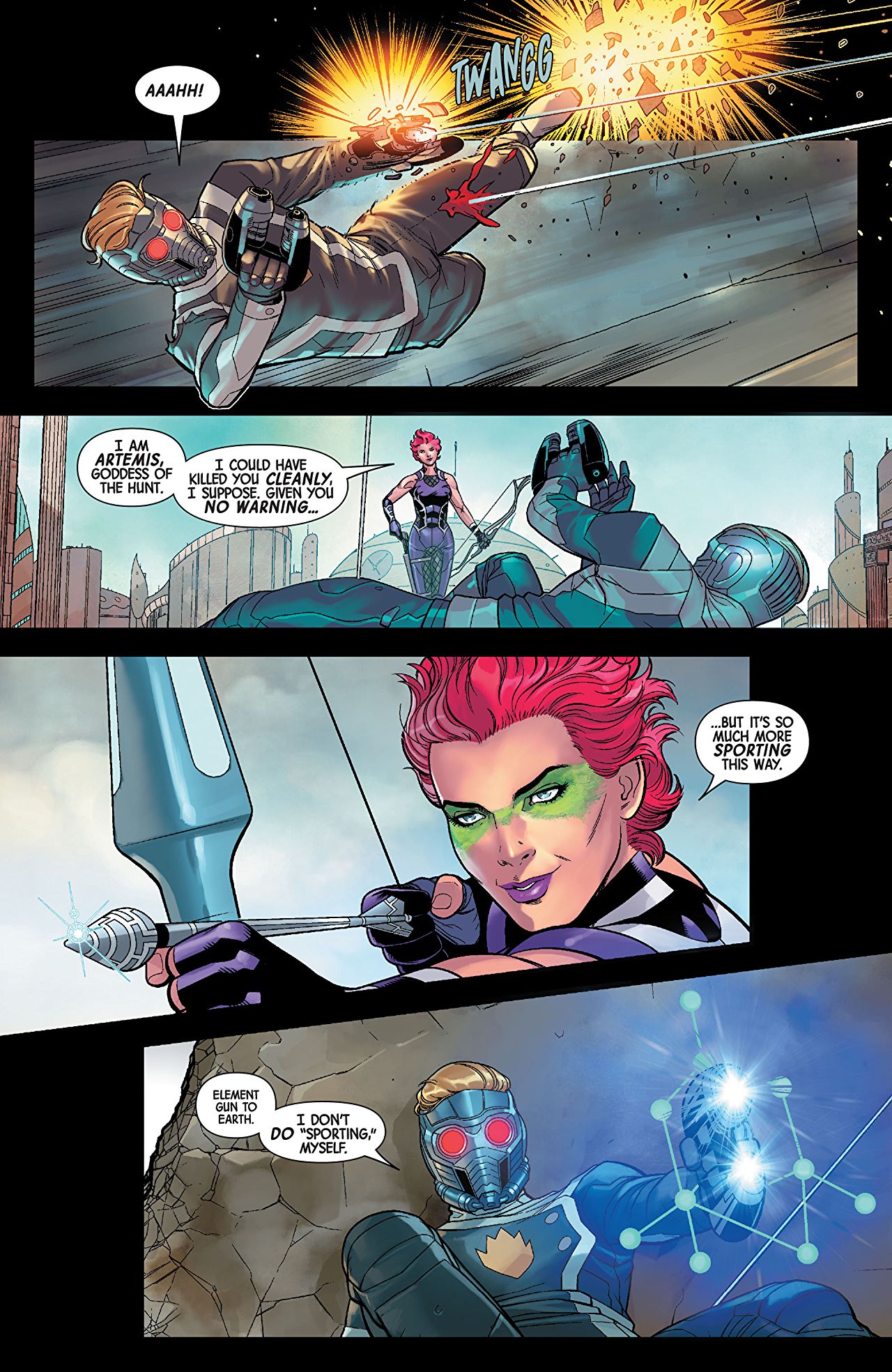