A Review of Guardians of the Galaxy #16:  The Last Annihilation

Al Ewing is making some good decisions with the characters and has thus far set up a rousing and potentially worthy sequel to the original Annihilation event.  I hope this momentum continues and evolves into a finished product that most of us will find satisfying.

Dormammu is an inspired choice for the big bad for this event and the choice is already paying off.  I really liked seeing most of the main characters get some important page time and character development time.  Ewing also perfectly balanced the character development with exciting action sequences.

One thing that bothered me, though, is how Drax is being portrayed.  His voice is not quite right – especially with goofiness briefly rearing its ugly head once again.  Ewing is apparently trying to split the difference between the goofy MCU version of Drax and the most recent MU version of Drax and it just isn’t working.  I’m also puzzled as to Drax’s current power set.  Is Drax back to just being a tough, semi-invulnerable knife fighter or does he have his original powers?  I’m certainly hoping for the latter, but in this issue, it seems it’s the former.  Please, Mr. Ewing, let’s drop the goofiness and the powers-free portrayal of Drax and get him back to the aloof, obsessive, powered-up killer portrayal that serves his character best.  It is my bias that Cosmic is best served seriously, with humor arising organically.  When Cosmic is played for cheap laughs, it quickly descends into high camp or low-quality self-parody.  There are numerous examples.  Would you argue that the classic campy Lost in Space is superior to the current serious Lost in Space series?  Same argument for the 1970’s Battlestar Galactica vs the 2000’s series.  What the MCU lacks is a serious ongoing Military SF product.  Look at the successes of the classic Star Wars and Star Trek products – both Military Science-Fantasy/Science-Fiction – and both played straight with no campy, goofy, self-parody in either.  Feige needs to rush the original Annihilation to the screen AS ORIGINALLY WRITTEN as it is the best Military SF Marvel ever produced.

The Nova and Star-Lord buddy relationship got some great page time this issue and we got to see Nova flex the Nova Force powers like we haven’t seen for a good long while now.  Also, Quasar, the REAL Wendell Quasar, got some good page time and action sequences.  All I can say is let’s see more Nova, Star-Lord, and Quasar doing the Cosmic powerhouse things they do best.  That’s what’s going to make this event.  And by Quasar, I mean Wendell, NOT whatshername.  Whatshername is NOT and will never be Quasar.  She just needs to go away.  And while we’re at it, NINO is NOT and will never be Nova.  Nova is Rich Rider.  NINO is not even a real Nova Corpsman.  His powers are criminally stolen from the Xandarians.

Speaking of going away, it has already been teased that some of the characters will not be surviving.  This has me worried about some of the classic characters given this stupid, thoroughly misguided, and racist-sexist PC trend of replacing beloved classic white male characters with females and/or racial minorities.  I’m worried because both Quasar and Nova, classic white male heroes, already have PC replacement characters waiting to step in, namely Whatshername for Quasar and Nova in Name Only (i.e, NINO) Sam Alexander for Nova.  I’m a little more worried for Wendell than I am for Rich in the near term, but I’m also very worried about Rich given that his turn in the MCU is coming up and it is already being floated that his character may be gender and/or race bent for the MCU.  Mr. Ewing, no doubt despite pressure from your editors, you’ve mostly resisted going down the tried and failed path with Cosmic thus far.  Please also resist replacing beloved classic white male characters with race and/or gender-bent characters.  It is NOT a way to gain new readers.  It is merely a way to alienate the established base of paying customers who, in response, will abandon the book in droves.

To editorialize a bit, the Twidiots who populate the Twitterverse are not a representative sample of anything.  A few Twidiots who never liked comic books or comic-book-based movies in the first place screaming loudly about the classic superheroes being mostly white males did not hurt the box office for the Iron Man, Thor, Captain America, Ant-Man, Avengers, and Guardians of the Galaxy movies, did it?  The ticket buyers weren’t at all concerned that most or all of the title characters were classic white male heroes.  The stories of those classic white male heroes are great and timeless.  The stories, ideals, and classic heroic personalities of the characters made them great and earned them a fan following who ardently wanted to see them portrayed AS ORIGINALLY CREATED AND WRITTEN on the silver screen.  The fans have a strong and enduring emotional connection to these characters and are disappointed when the characters are significantly changed just to satisfy some political fad.  There is no clamor in the general population to replace all classic white male heroes with females and/or minorities.

Personally, I was offended that for the Dr. Strange movies, the Ancient One was race and gender-bent from an elderly Asian male to a young white female.  As I recall, the Twidiots had a problem with the race bending about the character but not the gender-bending.  I would have had a problem with Black Panther or Shang-Chi being race or gender-bent, too, had the MCU decided to do such for their original movies.  I imagine the Twidiots would’ve collectively lost what passes for their minds if Black Panther or Shang-Chi had been race bent but would’ve been fine with it if they had been gender-bent.  Don’t even get me started about The Eternals movie.  It seems that the Twidiots think it’s OK to replace a classic white male character with a female and/or minority character, but it's not OK to replace a classic female and/or minority character with a white male.  That hardly seems fair.  In fact, it seems racist and sexist.  But there is a simple solution.  Leave the classic characters as they have always been in terms of race and gender – and create new characters with the gender and racial characteristics you think paying customers may want.  If paying customers really do want such characters, you’ll make money.  If they don’t, you’ll lose money.  Just don’t alienate the existing fans by killing off their beloved classic heroes just because they’re white males and expect us to then embrace the new PC character to whom you give their name and powers.  That embrace is not going to happen.  You’d think the powers that be would’ve realized that by now and would start ignoring the Twidiots.

Thanks for tolerating the rant.

I am really becoming a fan of artist, Juan Frigeri.  He has a natural talent for Cosmic art and every page of his renderings is a delight to the eye.  Blee is an exceptionally talented colorist who unfailingly complements Frigeri’s art.  Please, Marvel, keep this art and coloring team on Cosmic books for a good long time.

And so, The Last Annihilation begins.  It is a good start and well worth your investment of money and time so far.  Buy this book and vote with your dollars so that Marvel sees that Cosmic is alive, well, and in demand.  That is the only way to get more high-quality Cosmic on the stands.

Guardians of the Galaxy #16 preview: 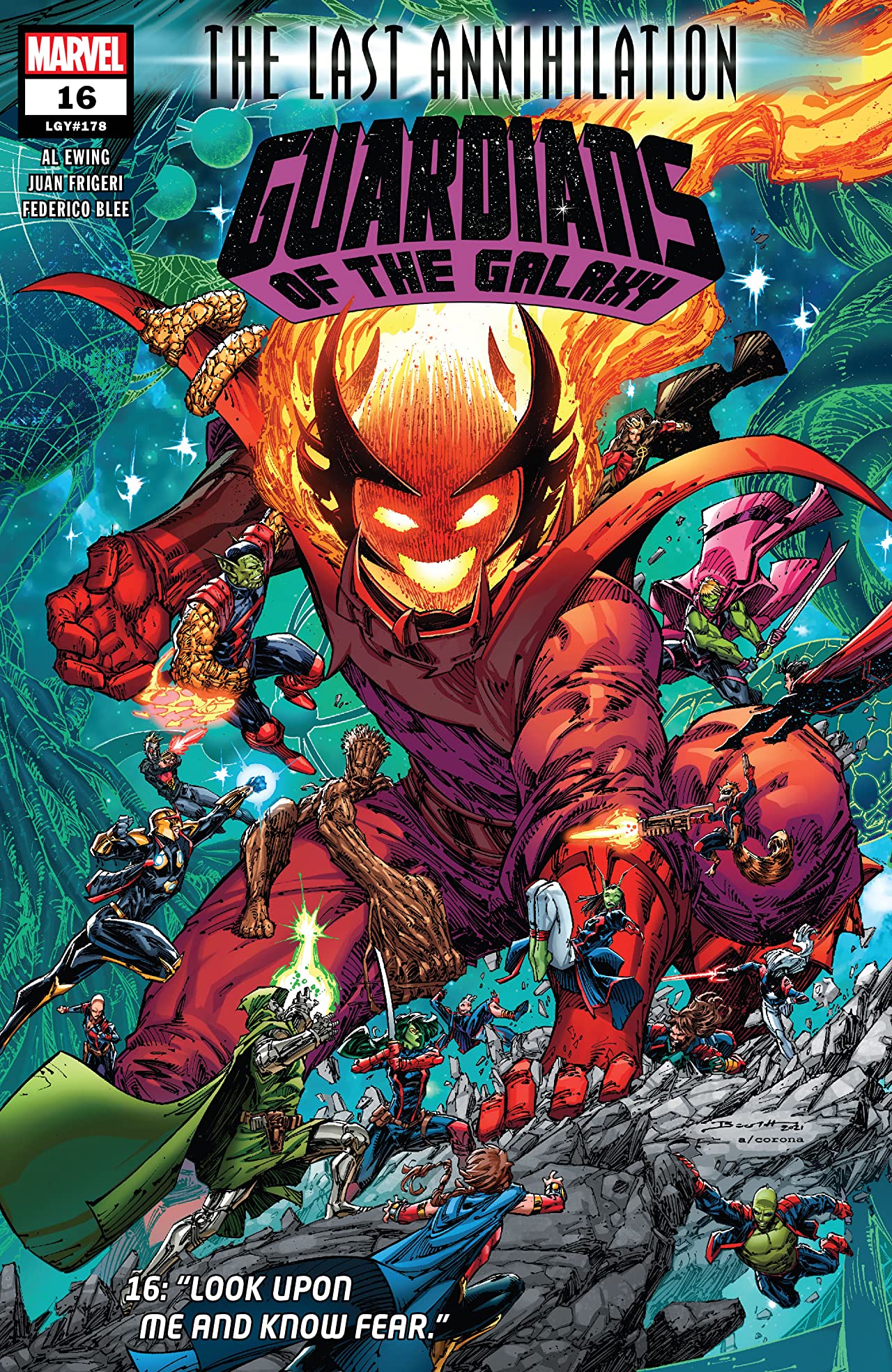 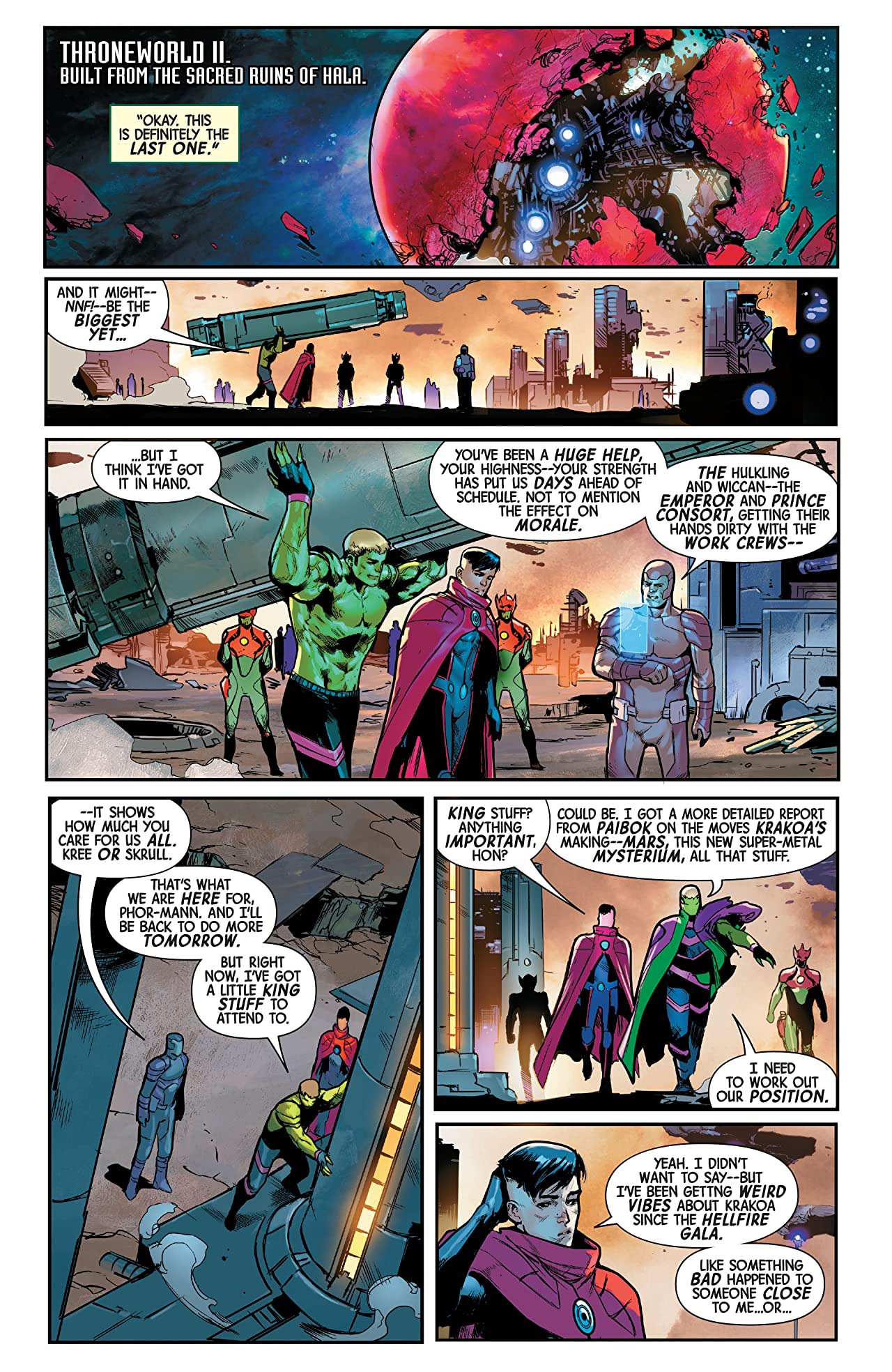 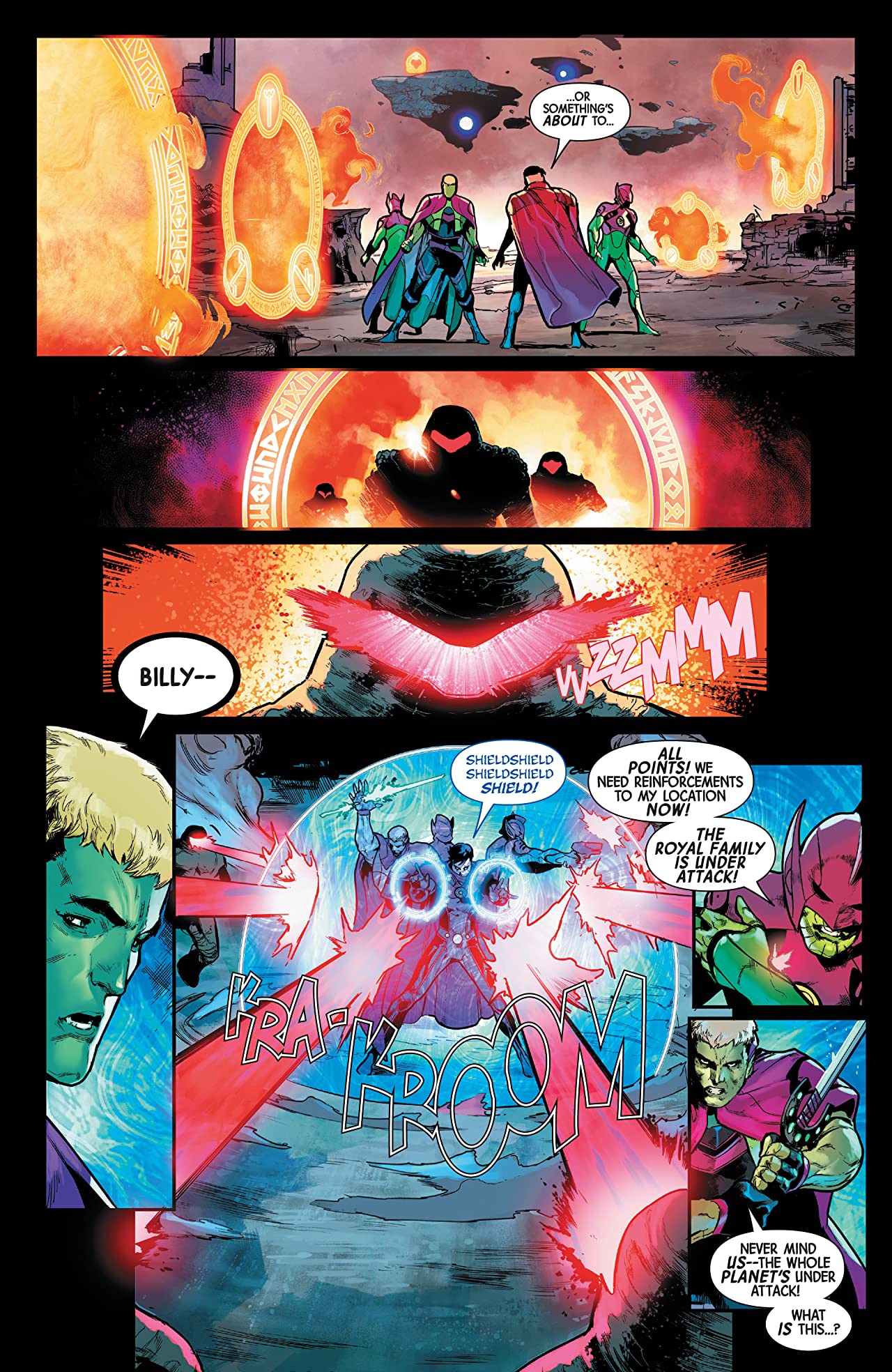 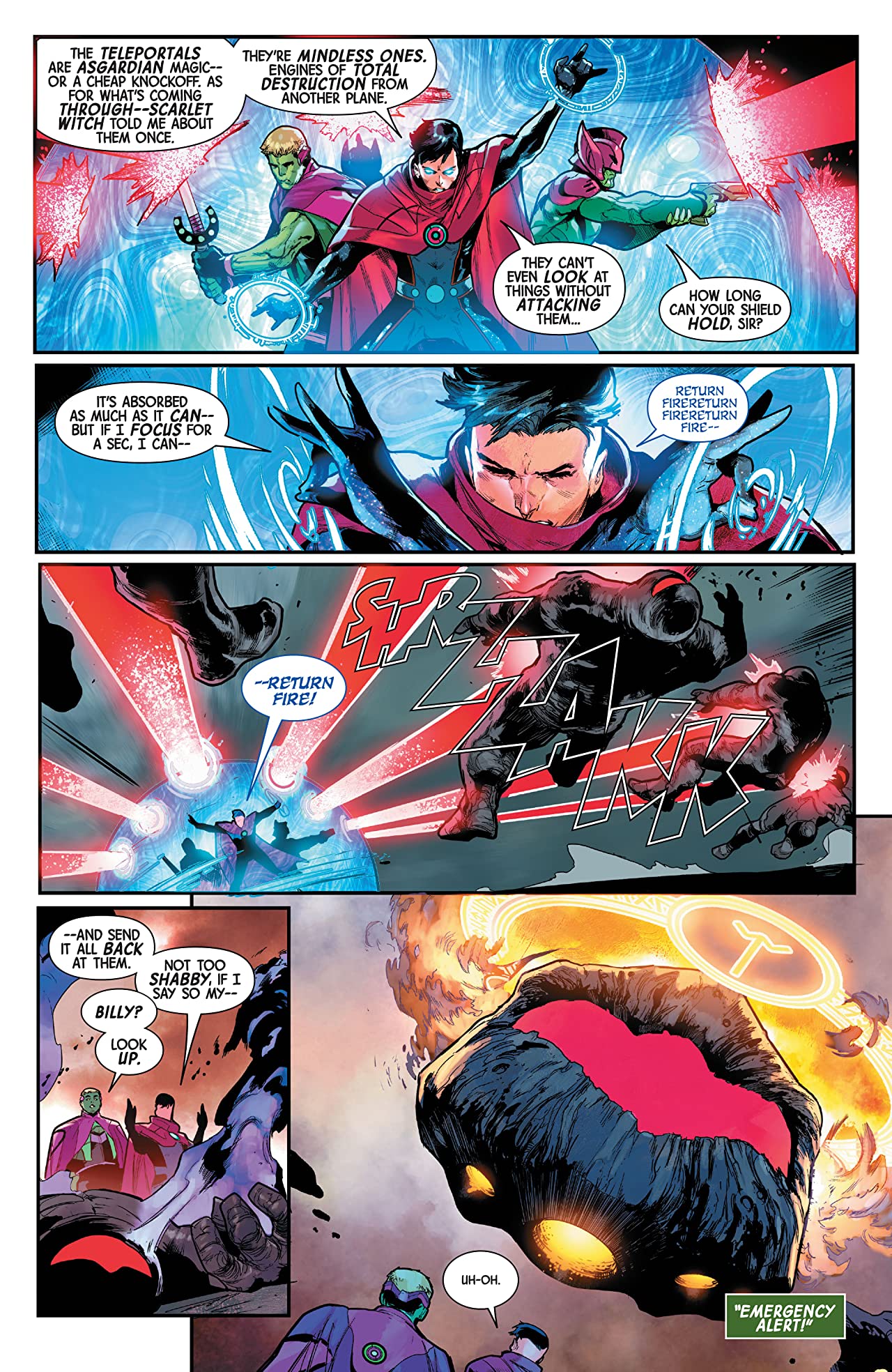