An Opinion-Editorial Type Review of Guardians of the Galaxy #12

Personally, I would have preferred a hard re-boot back to the time and way Cosmic was handled by DnA with the mishandling and mangling of Cosmic by Bendis, Loeb, et al being dismissed as a bad dream or alternate universe storyline. Such a hard re-boot would have been especially satisfying if it included the disappearance of bad PC Cosmic characters created during the Bendis-Loeb mishandling era such as Sam Alexander and female Quasar. Alas – such a hard re-boot is just a pipe dream and we’ll have to settle for Ewing’s soft re-boot as it appears that his soft re-boot is the best we’re going to get from the decision-makers at Marvel.

While not being everything I’d like to see, I must admit that the soft re-boot is a definite improvement from the Dark Ages of Cosmic under Bendis, Loeb, et al. Ewing has managed to rehabilitate Nova, Star-Lord, Rocket, and Groot – rescuing them from the corners they had been painted into by a decade of bad writing, bad storylines, and bad attempts to press the MCU portrayal of the Guardians of the Galaxy characters onto the comic book characters. Good starts have been made in the rehabilitation process with Gamora, Drax, Moondragon, Phyla, and Hercules – but more needs to be done. Marvel Boy is as bad a concept as he’s ever been – so no change there. It remains to be seen what Ewing will do with some of the other major Cosmic characters who will be starring in Guardians of the Galaxy in upcoming issues. Some of these characters have been the victim of brutal hack-jobs over the past decade while Cosmic was in decline and are in need of a great deal of rehab. I’m especially interested in seeing how Ewing will handle Quasar’s rehab.

While not up to the standards of yore, Cosmic is working better now than it has in a long time. Ewing seems to realize that the comics don’t have to mimic the MCU and Marvel Editorial is wisely allowing him to deviate from the MCU portrayals. That’s a great decision for everyone. Most of the inspiration for the MCU storylines has come from comic book storylines though admittedly watered down so as to appeal to the general public. The reason the MCU has been so wildly successful is precisely because those original comic book storylines and the characters they concerned were so good in the first place. The formula of adapting those storylines for the screen and sticking as close as possible to the letter and the spirit of the storylines and the characters they concerned has paid off to the tune of billions of dollars for the House of Mouse. You’d think the MCU decision-makers would be paying more attention to the dollars earned than the mindless blather of the Twitter mob or Hollywood Critics – neither of whom are representative of anything but loud-mouths who never liked comic books and the movies based on them in the first place and would have found some other reason to hate and bitterly complain if the popular target of white men couldn’t be trotted out of the gate immediately. The fact is, Iron Man is a white billionaire military-industrial Capitalist, Captain America is a Greatest Generation white man, Thor is a Nordic god (you can’t get much whiter than that!), and Hulk is a destructive white rage machine. Despite all of them being caricatures of white men – the general public still lined up to pay billions of dollars to watch movies about them and shows no sign of losing interest in the present. Yes – print comic books are in decline now but that’s not because many of the major characters are white men. It’s about entertainment preferences moving away from print and toward electronic interactive media.

From the 1960s to the present, comic books have been one of the more inclusive forms of entertainment. Heroes and villains of various races, cultures, genders, and sexual orientations have been portrayed. Few had a problem with it when the portrayals were organic parts of the storyline. The objection that most people have to PC is it being forced on them or feeling preached to by someone who is virtue signaling. As Guardians of the Galxy evolves into what is obviously going to be a new era with a conscious decision to include the entire range of persity, let us hope that the focus is on good storylines and not culture wars. I and I think most others, want to read stories about heroes rising to greatness in the face of adversity to escape for a while from the issues of daily reality with which we must contend.

What has worked well in Ewing’s rehab of the characters so far culminates in Issue #12. Star-Lord evolves back into a more mature battle-hardened decisive character, Nova does the same, as does Rocket. I hope we don’t see Groot regressing back to a 3-word character as his more conversant version is more interesting and the 3-word joke has now been over-played. The evolution of Moondragon was deftly handled and makes her a more interesting character now. Sending away the mad-Greek-gods was welcome. I hope to not see them again as I vastly preferred their classic portrayals in the comic books and hope for a return to such in the future. I have mixed feelings about turning the Guardians of the Galaxy into an Avenger-ish inter-galactic vigilante super-hero team. I think they work better as mercenaries, but I’m keeping an open mind. I’d rather see a re-building of the Nova Corps – but I’m hoping that will come about in a future issue.

Cabal delivered some incredible art for this issue and Blee’s colors were astounding. Albuquerque and Maiolo’s cover art was the perfect depiction of the culmination of this arc and the heralding of a new era.

I look forward to this new era of Guardians of the Galaxy, and I’m hoping we will be treated to some storylines that will rival the greatness of Marvel Cosmic of yore.

Guardians of the Galaxy #12 preview: 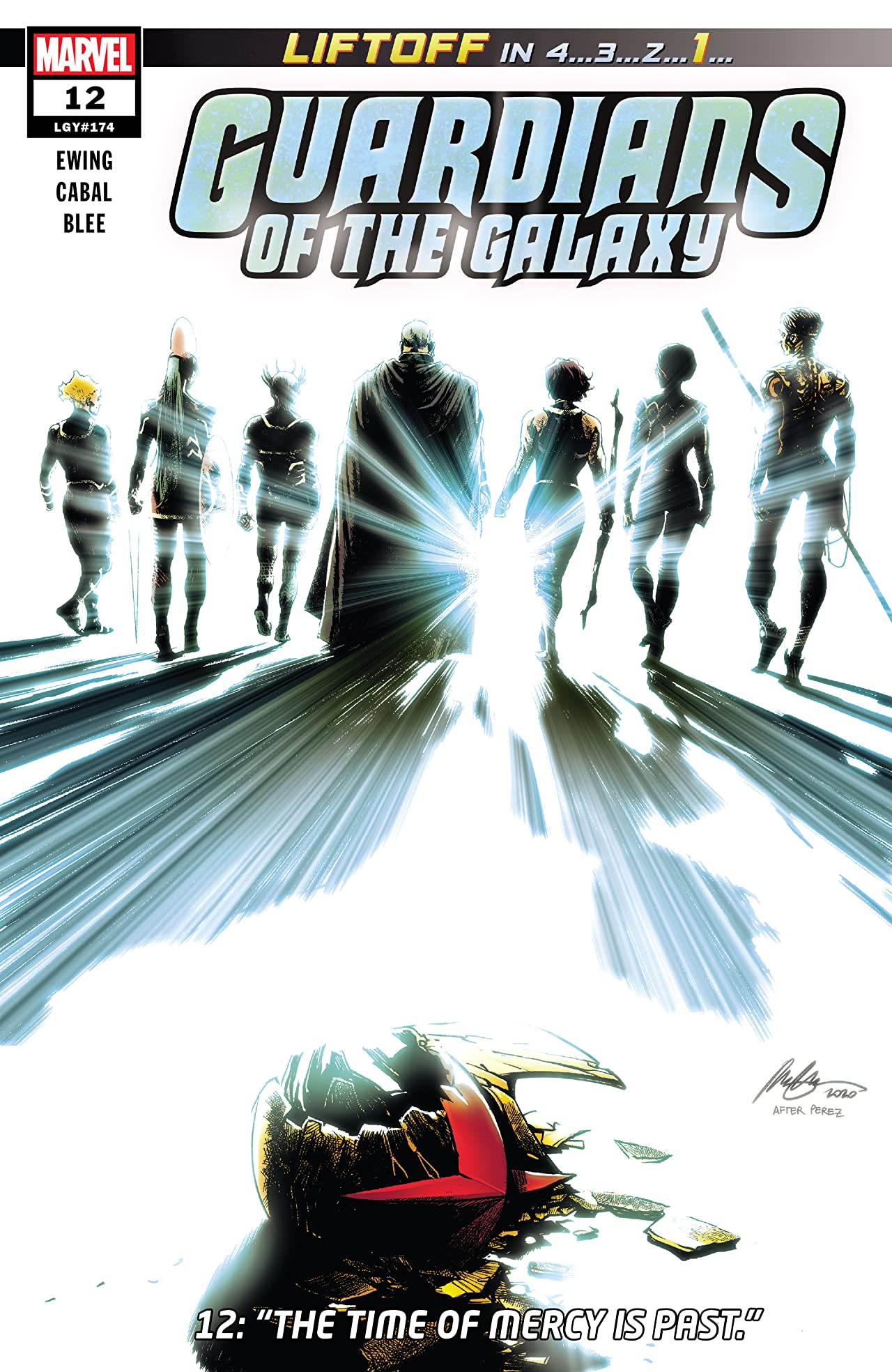 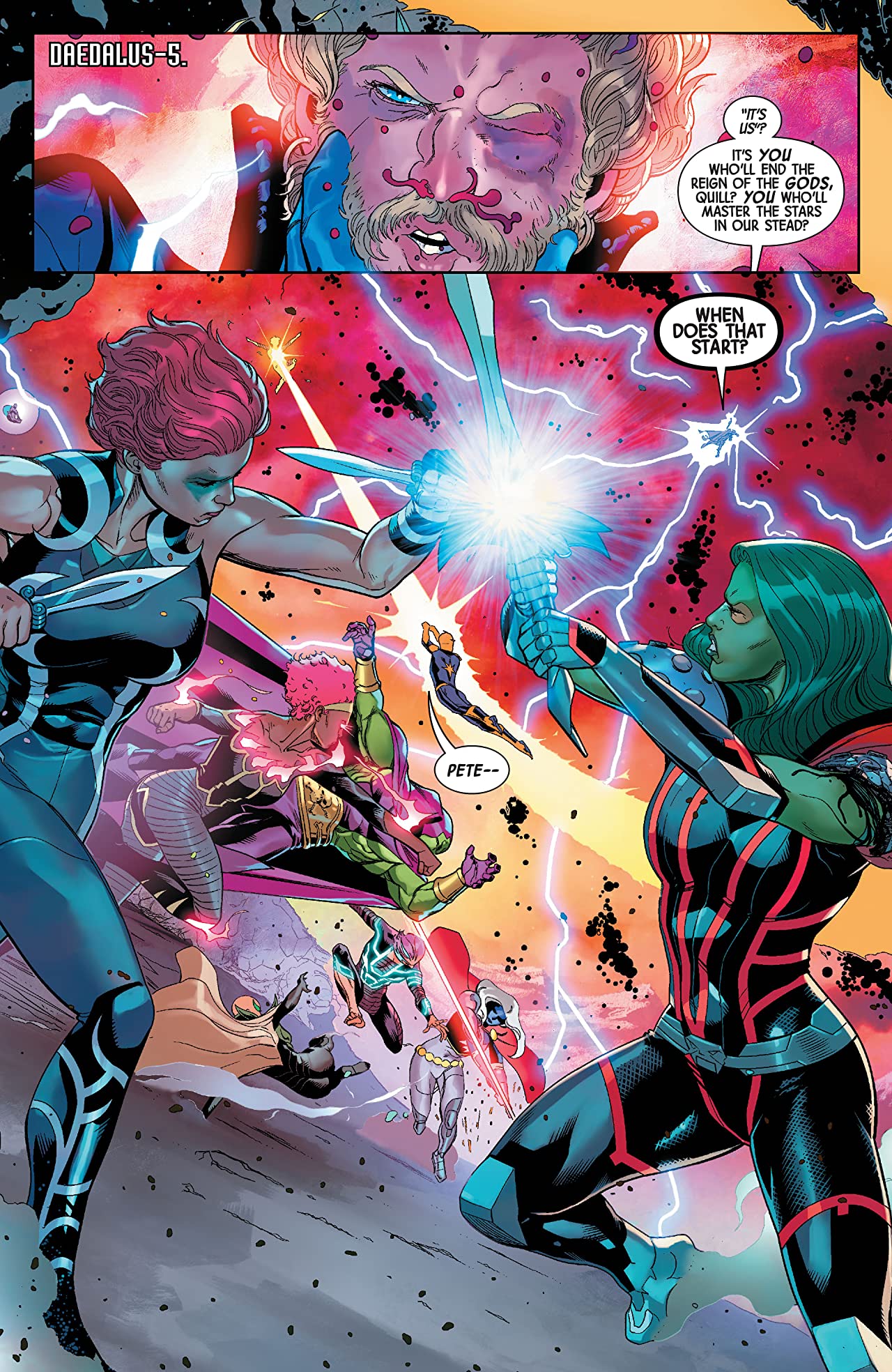 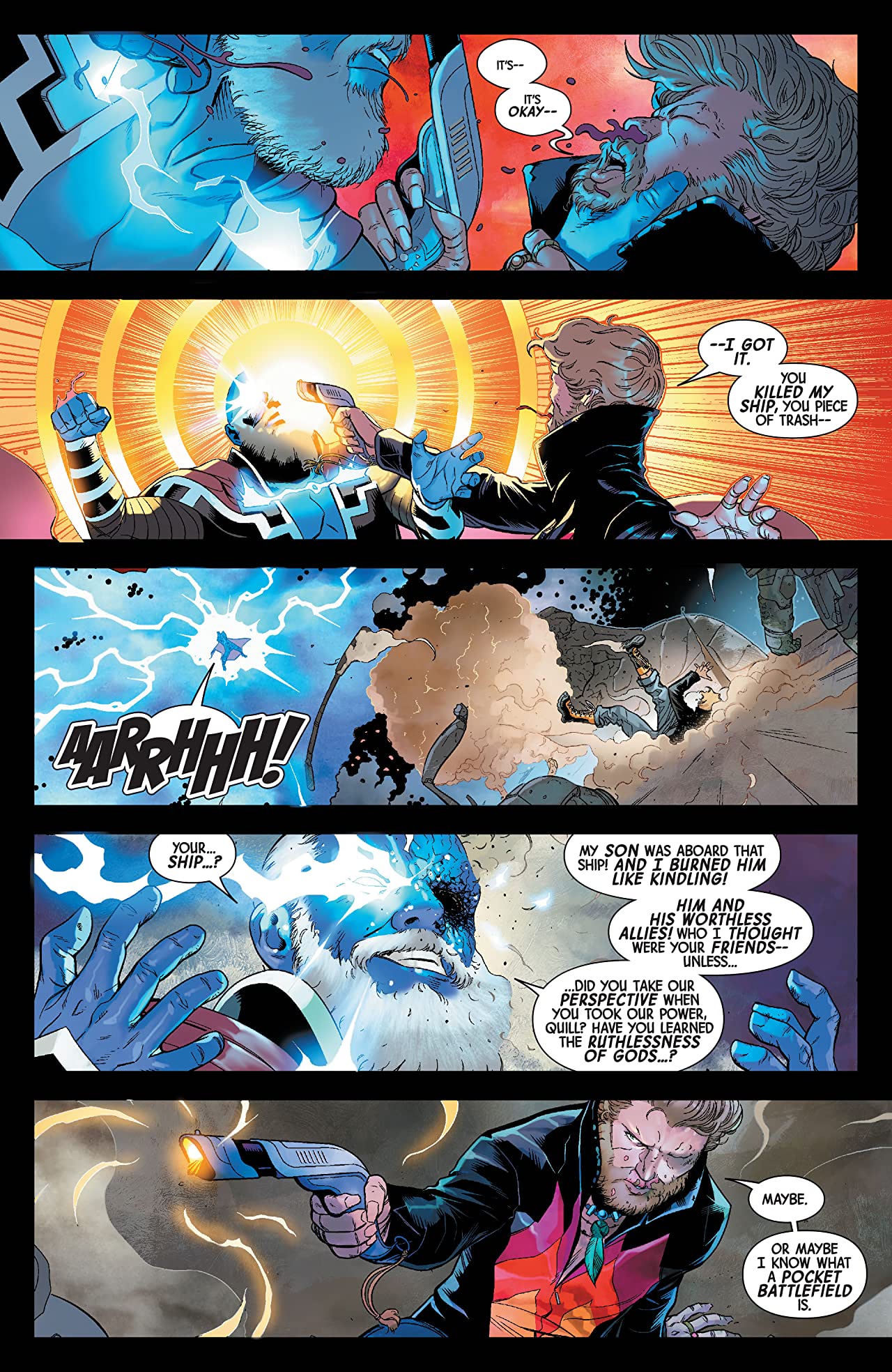 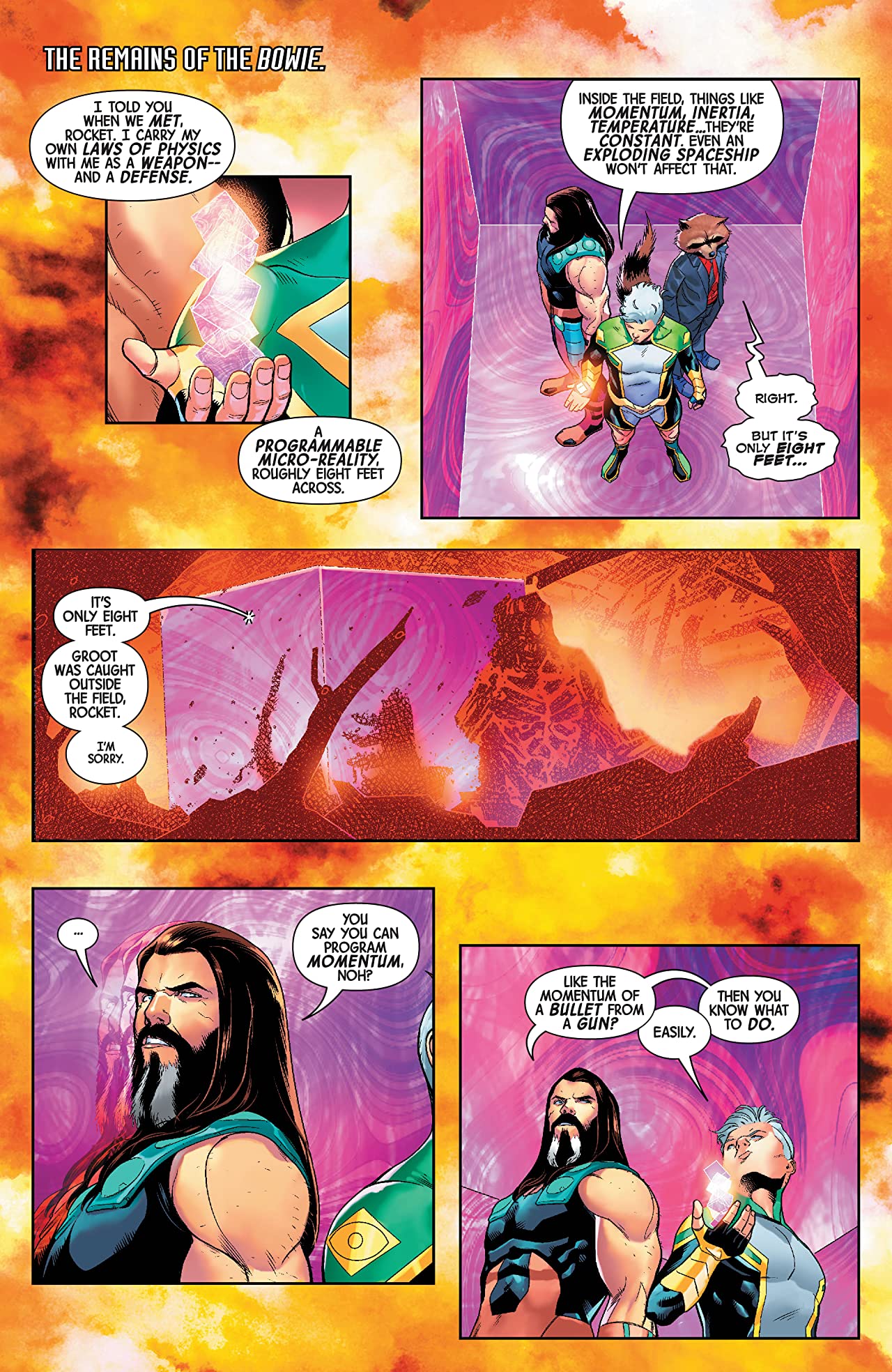