Parents are seeking an order of protection to keep the actor away from their daughter who he first met when she was 12-years-old.

The Flash star Ezra Miller is accused of grooming a young girl, and her parents are seeking an order of protection to keep the actor away from their daughter.

In court documents obtained by TMZ, it's said Ezra Miller first met Tokata Iron Eyes when she was just 12-years-old, with Miller then 23-years-old, when Miller was visiting the Standing Rock Reservation in North Dakota, and according to the girl's parents, it's there where they sparked a friendship that has put their daughter at risk.

The parents claim that Ezra Miller also flew Tokata to London in 2017 to visit the set of Fantastic Beasts and Where to Find Them, with Tokata only 14-years-old at the time while Miller was 25-years-old.

The parents also claim Ezra has supplied their underage daughter with alcohol, marijuana, and LSD, and that as a result of their friendship, Tokata has dropped out of school.

The court documents also reveal the parents flew out to Ezra Miller's home in Vermont in January to get their daughter where they discovered Tokata didn't have her driver's license, car keys, bank card and other items needed to navigate life independently, and her parents say they also found bruises on Tokata's body which they allege Ezra caused.

Following the girl returning home, it's said she fled to NYC to reunite with Ezra, and from there, the pair has been traveling together to Vermont, Hawaii, and Los Angeles.

Worth a mention is that while Miller was in Hawaii, he was arrested numerous times.

The court documents further allege that Ezra Miller told Tokata to go by a different name, "Gibson," and that Ezra decided Tokata is "non-binary transgender," when Tokata had previously declared herself as "non-binary, queer, gay."

"Ezra uses violence, intimidation, threat of violence, fear, paranoia, delusions, and drugs to hold sway over a young adolescent Tokata," states the parents of the girl who is now 18, and Tokata is the daughter of Chase Iron Eyes, an activist, attorney, politician and member of the Oglala Sioux Tribe.

An Instagram account said to belong to Tokata Iron Eyes responded to the controversy by mentioning how supportive her "comrade" Ezra Miller has been. 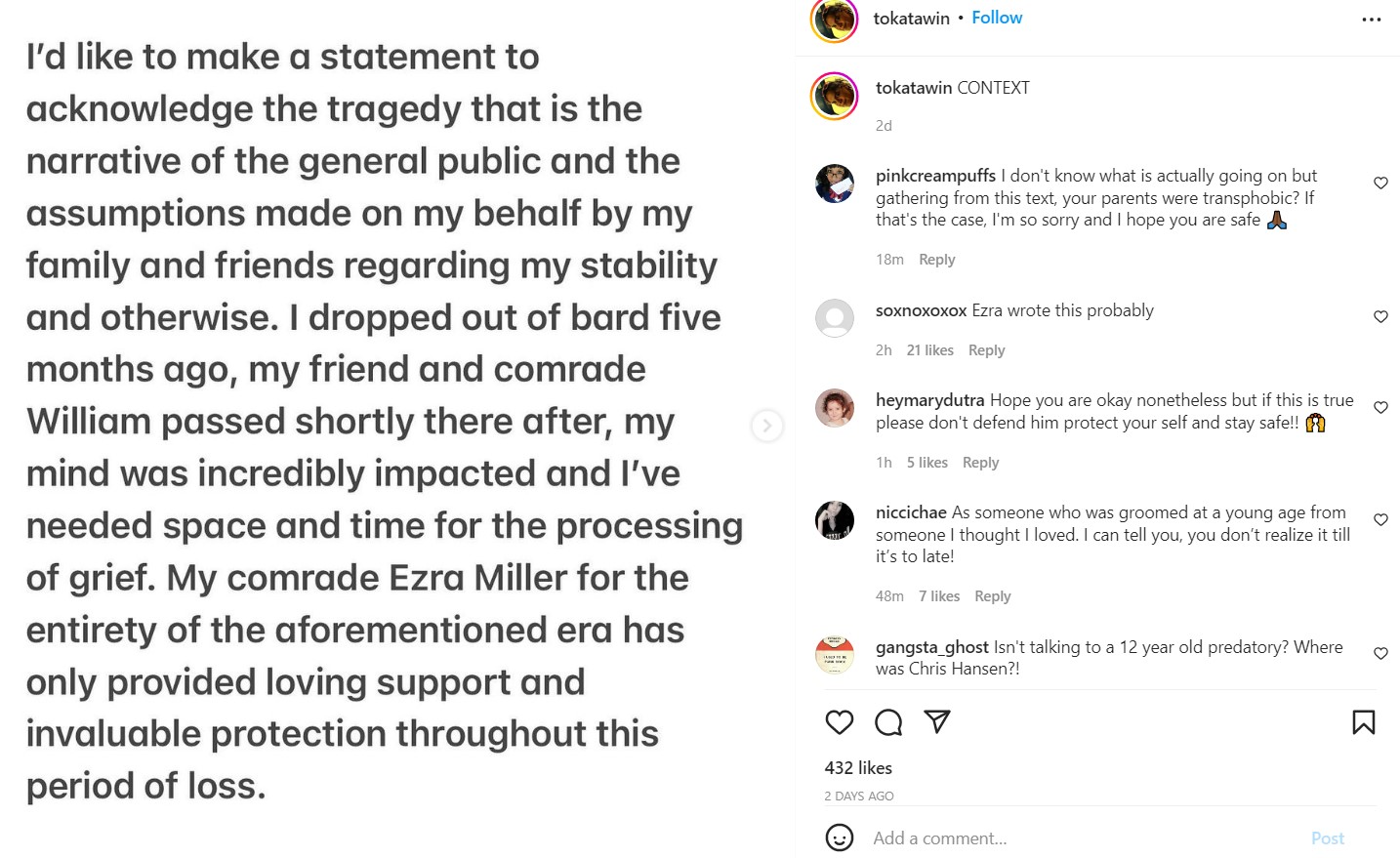