Fans are rejecting The Umbrella Academy Season 3 as the Audience Score on Rotten Tomatoes is only 62% compared to the more favorable Audience scores of the first two seasons, 88% and 85%, respectively. 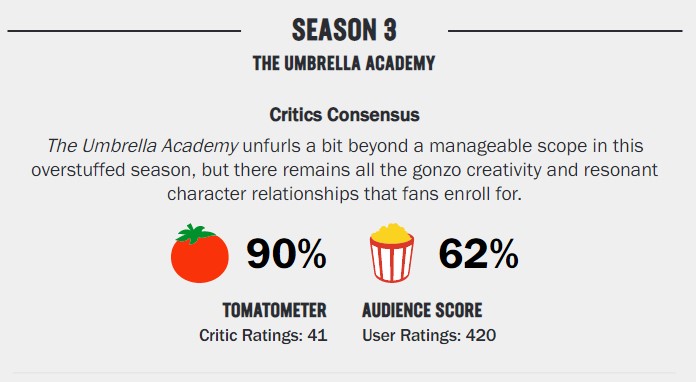 I just finished The Umbrella Academy Season 3 last night and thought the season was decent enough (the Multiverse stuff is cool) though the episodes seemed to be filled with a lot of unneeded nonsense and filler (“Wedding at the End of the World” is a complete waste of time).

Remember how the first season had that cool dance scene with Tiffany’s “I Think We’re Alone Now?” Well, every episode of Season 3 seems to have that.

Season 3 also goes into why Ellen Page is now Elliot Page, which is something I felt wasn’t needed, as Elliot Page is playing a fictional character here, so why does the character need to change with the actor and the story needs to justify it?

Season 3 also ended in another cliffhanger and series showrunner and creator Steve Blackman recently said Season 4 will probably be the last (yet to be greenlit by Netflix), so the series seems to have run its course.

Check out fan reactions below.

Regarding The Umbrella Academy Season 4, Blackman filled in The Wrap that it would make a good ending.

“I think inevitably if we got a Season 4, it’s going towards an endgame,” Blackman said. “I think at a certain point, I’m not sure where we’d go after Season 4. We have to be careful. My plan for next year is not to continually tread on the same ground we have before. It’s a challenge to come up with a new way to subvert this storyline, and I think we have an idea how to do that. But I think if we got to Season 4, it would be a great ending for the run of the show. I’m not saying I couldn’t do more, but you know, I think that would be very satisfying for the audience, four seasons.”

Blackman continued, “I know Season 4. I always pitch it to Netflix ahead of time before I sit down with the writers, so Netflix knows what I’m proposing for Season 4. I know the beginning middle and end, I know where we’re going to. Since I started ‘Umbrella,’ I only knew in my head what I thought the first four seasons are. I have no idea where I’m gonna go after Season 4 if we’re so lucky to have more of that. So I have four seasons of story in my head. I know where I want to go. I know where I want to end, and if we’re lucky enough, I hope the fans will get to see it. I don’t know if we’ll be at the end of the run or not. But either way, I have a plan.

“I want to pose to the viewer and the fan, ‘Would they be happier without their powers?’ I mean, all they do is complain about being who they are,” the showrunner said. “So will Victor, will Diego be happy without it or will they feel like they’re missing an appendage? Will the world not be right for them anymore without powers? Can they be ‘normal’?” 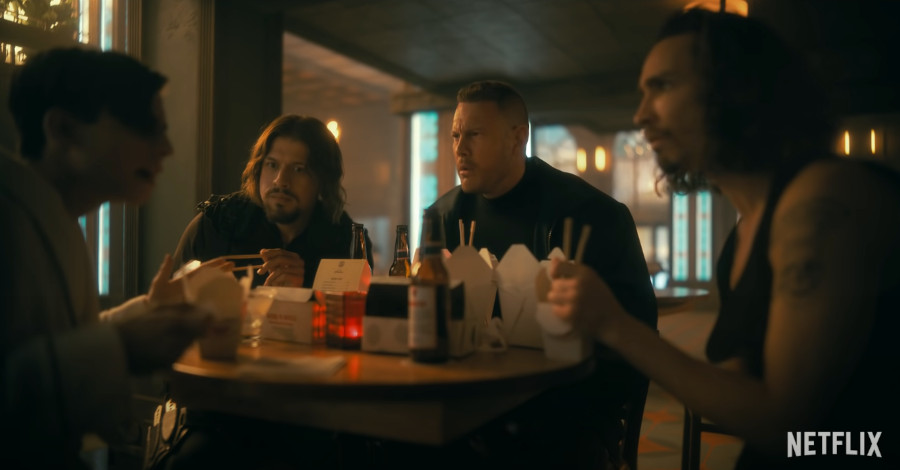 “Incredibly dissapointing, If you are a fan of Umbrella Academy, Try to imagine the Season 3 never existed and live happen knowing that season 2 was the last one,” said a fan who gives the season a half star.

Another fan gives the season 1 star: “Season 3 is bad. Its very illogical. This season doesn’t make any sense the universe is ending and the umbrellas does give a shit about it. They are fighting over petty things. First two episodes wasted on Viktor transformation. Harlan story line was pointless. Whats the point killing main characters if you are planning to bring them back. And come on samurais.”

From a 3-star review: “Would I watch it again? No. Would I watch a fourth season? Yes. There was plenty to still like – even love – about this season, but it just felt like a total mess at times with an over ambitious plot that came to a rather abrupt and confusing finish. Aidan Gallagher, Tom Hopper and Robert Sheehan were all terrific, hilarious and consistent as usual but I felt the writers massively underserved almost all of the other characters. There was just too much going on in this season to wrap everything up and conclude with a satisfying ending. We’ll see how they make amends, should they release a fourth installment.”

A 2-star review: “One word, nonsensical. Like, other than Klaus, Five, Luther, and Regie, all the other characters are either one-note, stupid, doing crazy shit they’d never do before, with no reason whatsoever! Very disappointing season…I expected more of Jeremy Slater, but then again, he did write Death Note(2017). (I like Sloane too).”

2 stars: “The third season lost itself in the ambition to top all the wacky plot points and twists that came before it. Throwing in some big “reveals” every episode does not make a show better if they weren’t properly set up or serve as an interesting tool to drive the plot forward.”

1 star: “Unfortunately it kind of seems like Ellen Page ruined this series. I thought Vanya was awesome and was waiting for some crazy stories. Apparently actors can now write their own stories and portray themselves (not have to do the job of acting anymore)… I skip scenes with Ellen Page now because you can tell she just doesn’t care. Such a shame as actors like Aidan Gallagher, Tom Hopper, and Robert Sheehan really shine in this show. Heck I didn’t even like Tom Hoppers character at first but his acting really crushed it so hard I fell in love with him. Don’t get me started on Colm Feore. I can’t even believe he’s in the show.”

2 stars: “wow netflix wants to through all its best shows out, just starting with that pathetic dance scene makes me realize how bad this would be.. Its a shame how this new direction of netflix affect all of its shows now.. unwatchable…”

2 stars: “Still has a few of the elements that made the first season entertaining but the season 3 plot is a bit of an incoherent mess, not helped by shoe-horning in a gender transition plot to accomodate Elliot Page’s real life changes. Once upon a time acting involved pretending to be someone other than your real life persona but apparently we’re past that now. Unfortunately the consequence of this is that other plot lines are not developed properly – for example when Allison realises her only child no longer exists in this timeline the others just leave her alone to cry in her room for a bit, but take the time to chat with Vanya/Viktor about how they’re doing. On top of this there’s the farcical plot of Diego and his son which just feels utterly pointless. There are still some highlights, Robert Sheehan as good hearted screw up Klaus is still fun to watch, as is Aidan Gallagher’s acerbic Number 5, but overall this season is a disappointment.”

1-star review: “I used to love this show so much. Season 3 starts with a musical dance/fight scene that had me rolling my eyes immediately. Maybe I’m just beyond the age group in my early thirties. It felt like a teenager would like it. The show started strong but this season lacks creative, innovative ideas and resorts to a gimmicky, slapstick style. Where are the talented writers?”

2 stars: “Writing this season is absolutely terrible. Half the season is the equivalent of a murder mystery where you find out who the killer is in the first ten minutes and then watch everyone stumble around for hours trying to figure it out. All the while they flash the name of the killer on the screen every 10 minutes. They seemed to go the action>character development route, yet there wasnt even really action. Its more like “how much time can we stall before making the character come to the realization that the audience came to 3 episodes ago.” TLDR: They made 10 minutes of content into 45 minutes each episode. Sooo much filler.”